Yesterday, a huge number of profitable signals were formed. I suggest you take a look at the 5-minute chart and figure out what happened. Due to the lack of statistics in the first half of the day, the bears tried to put pressure on the euro again, but they failed to settle normally below 1.0484. After the breakthrough, the reverse test of this level turned out to be unsuccessful, as a result, the pair returned back to 1.0484. It was not possible to enter long positions either, since I did not wait for normal signals. The situation changed dramatically in the afternoon. A breakthrough and consolidation above 1.0521 with a reverse test from top to bottom is an excellent buy signal, which made it possible for us to take about 40 points from the market. A false breakout at 1.0561 did not lead to a strong downward movement of the euro, and after settling above 1.0561, I left short positions and started buying again on the reverse test. As a result, the pair went up another 40 points. Short positions at 1.0602 also made some money. 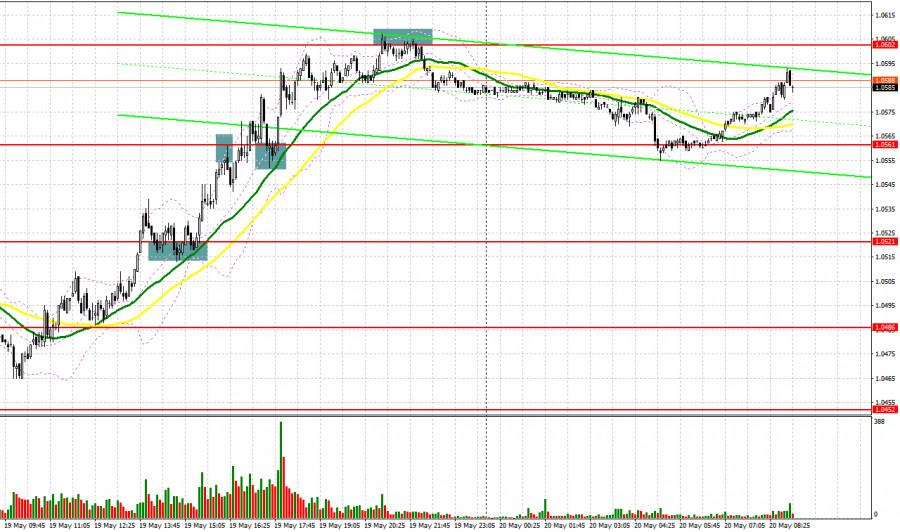 Today there are no important statistics capable of pushing the euro further up, and you won't get out of it with enthusiasm alone. I advise you to be very careful with further building up long positions at current highs and at the end of the week. European Central Bank board member Joachim Nagel's speech may lead to a EUR/USD rush to 1.0602, for which the main struggle will unfold in the morning. However, the main task is to protect the support at 1.0561, and things have been going well since the Asian session. For this reason, I advise you to open long positions there only after forming a false breakout at this level with the prospect of a breakthrough of 1.0602.

Slightly below 1.0561 are moving averages, which can also help the bulls. A breakthrough and test at 1.0602 from top to bottom creates a new signal for long positions, however, for a sharper rise, good data on the indicator of consumer confidence in the euro zone for May of this year, which is likely to continue to decline, is necessary. In case of an upward trend above 1.0602, the nearest target will be a high of 1.0640, where I recommend taking profits.

A more distant level will be 1.0691, but it will be quite difficult to get to it. In case EUR/USD falls and bulls are not active at 1.0561, pressure on the pair will quickly return as traders start taking profits later in the week. The best option to buy would be a false breakout near the low of 1.0521. I advise you to open long positions immediately for a rebound only from 1.0486, or even lower - in the area of 1.0452, counting on an upward correction of 30-35 points within the day.

The bears were defeated again, but today they will have a chance to retaliate. In case of growth, forming a false breakout at 1.0602, together with the divergence that is currently forming on the MACD indicator, will lead to the first signal to open short positions with the prospect of returning to the intermediate support at 1.0561. There will be a serious struggle for this level, therefore, a breakdown and consolidation below this range, as well as a reverse test from the bottom up, by analogy with what I analyzed above, all this will lead to a new sell signal and also handle bulls' stops and a larger movement of the pair down to the area of 1.0521, where I recommend taking profits.

A more distant target will be the area of 1.0486, but we can only reach this level if bulls completely surrender at the end of this week. If EUR/USD moves up in the first half of the day after the data on the eurozone, and if bears are not active at 1.0602, the upward trend may continue and there will really be talk of building a new bullish trend. In this case, the optimal scenario would be short positions during a false breakout forming in the area of 1.0640. You can sell EUR/USD immediately on a rebound from 1.0691, or even higher - in the area of 1.0736, counting on a downward correction of 30-35 points. 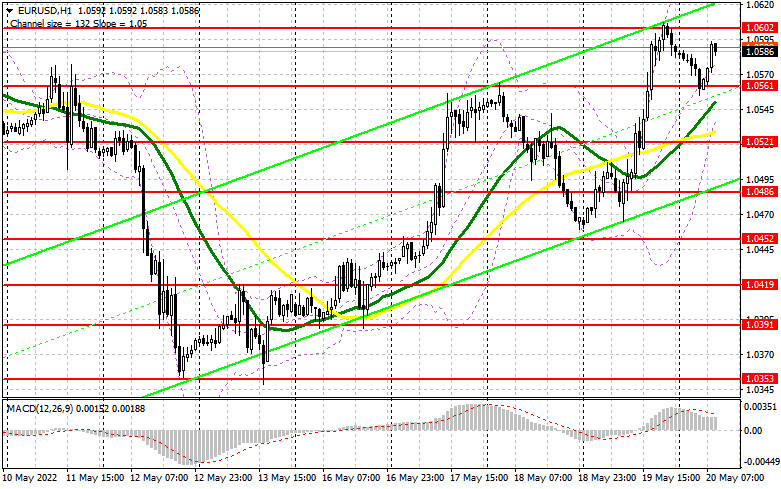 The Commitment of Traders (COT) report for May 10 shows a sharp increase in long positions and contraction in short ones. The euro's overbought status indicates interest from traders and investors. Recent statements from ECB policymakers arouse optimism in hope that the euro will be able to develop an upward cycle. The ECB governing board will increase the deposit rate by 0.25% as early as July 2022. The next rate hikes will follow in September and in December. The deposit rate will stand at 0.25% at the year-end.

Besides, the key interest rate will be raised in September and in December from the current zero level to 0.5%. Such a hawkish policy will allow the euro buyers to touch the bottom in the near future. Nevertheless, the US Fed alongside escalating geopolitical jitters might derail such plans. Let me remind you that the US Fed intends to pursue aggressive monetary tightening. There are rumors that the FOMC could lift interest rates by 0.75% at a time at the next policy meeting. This scenario gives a clear signal to buy the US dollar in the medium term.

Trading is above the 30 and 50-day moving averages, which indicates continued growth of the euro.