With banks closed in the US on July 4 due to Independence Day celebrations, the markets saw low volatility. The hawkish comments from the ECB were probably the biggest news that affected the markets a bit. A new governor of the Bank of Slovenia Bostjan Vasle said the ECB would start to raise rates more aggressively after the third quarter, Bundesbank President Joachim Nagel said the ECB's accommodative stance on monetary policy would be "quickly reversed" and restrictive policy may be needed to meet the inflation target.

Nagel also spoke about the ECB's new anti-fragmentation instrument and suggested that this instrument be used only in "exceptional circumstances." Speaking after Nagel at the same conference, ECB Vice President Luis de Guindos also expressed caution about the instrument. "We will react to prevent fragmentation, with suitable safeguards to prevent moral hazard," he said. Germany's 10-year bond yield rose by 10 bps overnight, while the 2-year bond rate increased by 11 bps.Meanwhile, Germany's trade balance is in deficit for the first time since 1991 estimated at -1 billion versus an expected +1.6 billion. Given high energy prices, the trade deficit in Germany will remain in the near future and the German industry is highly concerned about this.

US President Biden is reported to consider lowering some tariffs on Chinese imports. US Treasury Secretary Janet Yellen sees such steps as a way to curb inflation, but the Chinese government fears that the tariffs will again be used as leverage to gain concessions from China.

The latest Business Outlook survey for June shows that 9.1% of firms expect their activity to worsen compared to 4.7% who expected a decline in May. The survey logged the worst value since 2009. The main problem is the lack of supply, which is the main contributor to the unwinding of the inflationary spiral, so the RBNZ is forced to restrain demand until supply and demand equalize. Restraining the demand is expressed through an aggressive increase in rates.

According to the CFTC, the weekly change in the total speculative position is minimal, with a bearish outperformance of -331 million, which also does not give a sure direction, the estimated price reverses downward, although it is still holding above the long-term average. 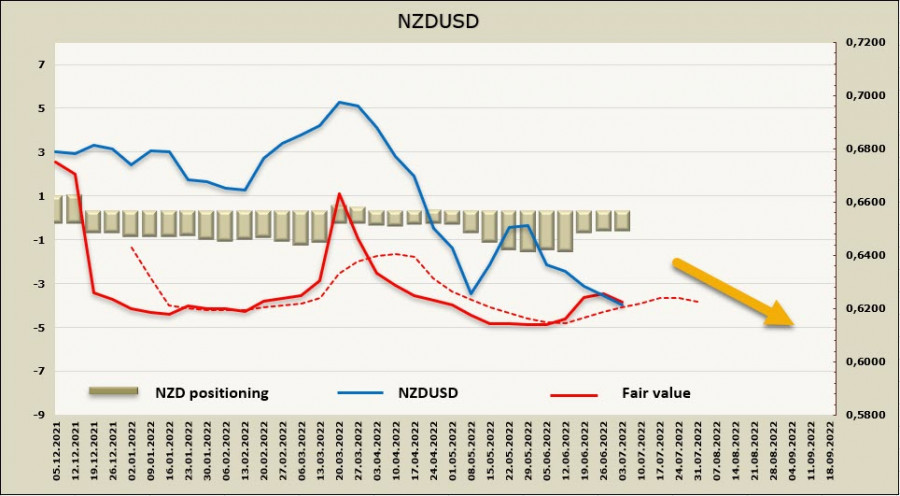 Most likely, the pair may attempt to decline. A week earlier, we had assumed that trading would continue within the channel attempting to move to its upper boundary, but the reduced likelihood of a recession in the United States has again increased demand for the US dollar, which continues to dominate the currency market. If bears manage to consolidate below the low of 0.6139 low, which is a good chance, the next target will be located at the support of 0.5900/20.

At a meeting this morning, the RBA decided to increase its interest rate by 50 basis points to 1.35% and also increased the deposit rate by 50 points to 1.25%. The RBA notes in its comments that global inflation is high, but things are not as bad in Australia as they are in other countries, and domestic causes of rising prices also play a role. In general, the RBA statement is restrained and contains the intention to take further steps to normalize financial conditions, but no specific promises are officially spelled out.

Since the results of the meeting were generally in line with market expectations, there was almost no volatility added. The AUD/USD is declining in line with overall market positioning. The Melbourne Institute's monthly inflation figure points to a very strong consumer price index for the second quarter, with the truncated average quarterly average up 1.4% q/q, up from 1.1% q/q in the first quarter. There were no signs of easing inflationary pressures in the latest month.

The net short position of AUD increased by 138 million over the reporting week, to -3.97 billion, the trend is clearly bearish, the settlement price is steadily going down, and the chance of a bullish reversal is minimal. 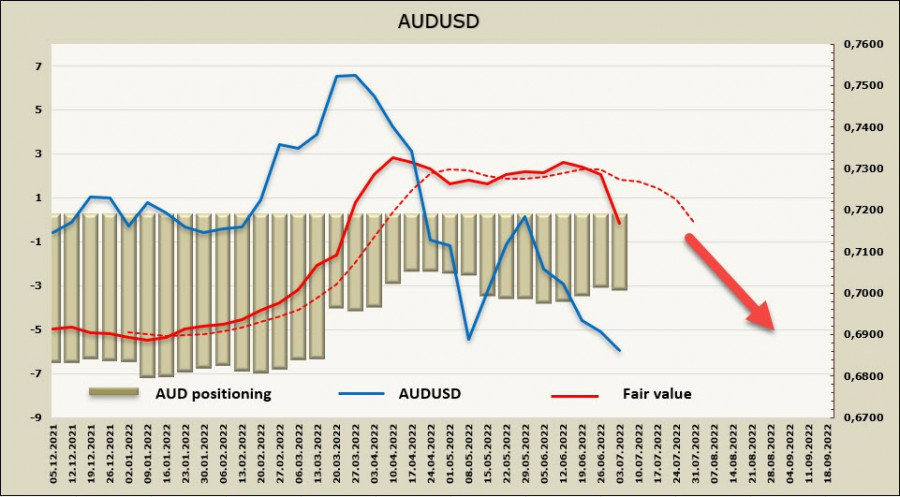 The Australian currency, as we suggested in our previous review, came out of the consolidation zone to the downside. The price is holding above the support at 0.6760 but the probability of its successful testing is high, there are no strong supports, and movement to the technical level of 0.6464 (61.8% Fibo) may be formed in the coming days.