06.08.202209:17 Forex Analysis & Reviews: Analysis of the trading week of August 1-5 for the GBP/USD pair. COT report. The pound sterling fell after the meeting of the Bank of England, and Nonfarms finished it off. 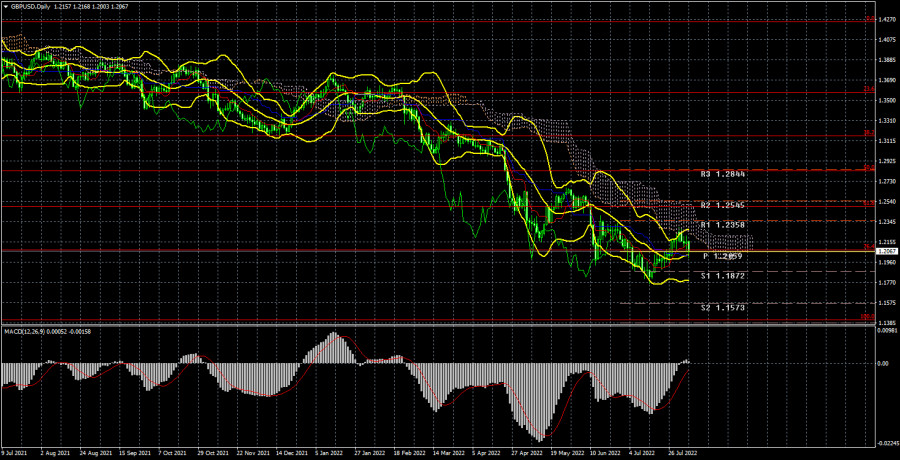 The GBP/USD currency pair has decreased by 100 points during the current week. Last Monday played a big role in this issue when the pound sterling continued to grow under the influence of high market expectations from the Bank of England meeting. The fall began only on Tuesday when traders began slowly preparing for Thursday and Friday's events. We have been talking all last week and the week before that, and by and large, there are no solid fundamental reasons for the growth of the pound sterling. The pound grew even when the Fed raised the rate by 0.75%. And although all this growth does not look convincing and powerful in a 24-hour timeframe, it was still there. And the reasons for this upward correction could only be technical (as in the euro) and fundamental. And it turns out that if the market worked out the BA rate increase in advance, then after the meeting, it did not need to buy the pound. Well, on Friday, the strongest statistics in the United States were published. That's why we say that the pound has fallen "only" by 100 points. Its losses should have been much higher, but at the same time, the price failed to gain a foothold even inside the Ichimoku cloud, so the prospects of the pound, as before, look very vague. We believe that now the pound/dollar pair can resume the global downward trend observed for one and a half to two years. At least once again, it should update its 2-year lows for sure. Despite the Bank of England raising the key rate, the Fed is doing it even faster and stronger. Thus, until the pace of monetary policy tightening in the US begins to slow down, the British Central Bank will continue to stay behind the Fed. Thus, the "foundation" is also on the side of the dollar. I don't want to talk about "macroeconomics" after a series of disappointing forecasts from Andrew Bailey. Geopolitics continues to support the US currency to a greater extent.

The latest COT report on the British pound again showed insignificant changes. During the week, the Non-commercial group closed 5,300 buy contracts and 2,900 sell contracts. Thus, the net position of non-commercial traders decreased by 2.4 thousand. But what does it matter if the mood of the major players remains "pronounced bearish," which is seen by the second indicator in the illustration above (purple bars below zero = "bearish" mood)? It should be noted that in recent months, the net position of the "non-commercial" group has been growing, and the pound also shows some tendency to grow. However, both the growth of the net position and the growth of the pound is now so weak (speaking globally), so it is difficult to conclude that this is the beginning of a new upward trend. It is difficult to call the current growth even a "correction." We also said that the COT reports do not consider the demand for the dollar, which probably remains very high right now. Consequently, strengthening the British currency requires that demand for it grow faster and stronger than the demand for the dollar. And based on what factors is the demand for the pound growing now?

The Non-commercial group has now opened 86 thousand sales contracts and only 29 thousand purchase contracts. Net positions will have to grow for a long time for these figures to at least level up. Theoretical support can be provided to the pound by the technical need to adjust from time to time. There is nothing more for the British currency to count on now.

There were no other important events in the UK this week, except for the meeting of the Bank of England. And there were no other important events in the US except for the ISM index, the unemployment rate, and nonfarm payrolls. We believe the abovementioned factors will continue to impact the pair's movement significantly. Of course, we can try to pay attention to the words of BA President Andrew Bailey, who stunned the markets with expectations of a prolonged recession starting in 2022, expectations of maximum inflation of 13%. However, again, what does it matter now for the pound? If the economy starts to shrink, it will only lower the demand for the British currency. One factor of the fall is more, one less, there is not much difference. Therefore, we believe the pound should resume a long-term downtrend.

1) The pound/dollar pair maintains a long-term downward trend but still gains a foothold above the critical line. However, there have been many such fixations in recent months, and the pair resumed the downward trend each time. Thus, cautious purchases are now possible, but it is necessary to consider the high probability of the resumption of the downtrend based on various factors.

2) The pound continues dangerously close to its 2-year lows and may fall again in 2022. If the pair returns to the area below the critical line, it may trigger a new round of the pound's fall with a target of 1.1410 (100.0% Fibonacci). And these are the absolute lows of the pound for the last 30 years. You can also monitor the rebound from the Senkou Span B line.

Price levels of support and resistance (resistance /support), Fibonacci levels – levels that are targets when opening purchases or sales. Take Profit levels can be placed near them.