Analysis of positions and tips on trading EUR

A test of 1.0215 occurred at a time when the MACD indicator had already risen significantly from the zero level. Even though the euro was expected to repeat the trajectory of the previous day, there were no good entry points. The pair lacked literally 3-5 pips to reach 1.0248. So, it was also impossible to open long positions on the euro for a rebound. There were no other entry points. 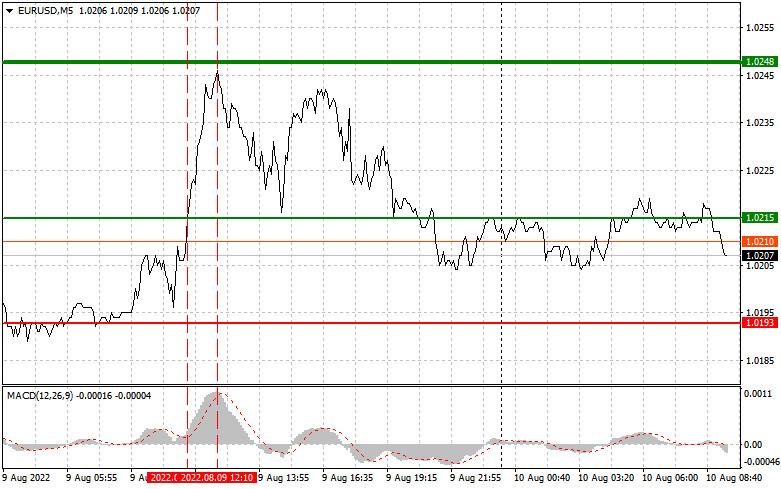 Yesterday, the economic calendar for the eurozone was completely empty in the first half of the day. The bulls asserted strength and managed to push the pair to the swing high, signaling a strong bullish bias. Today, the euro area is going to unveil the Consumer Price Index for Germany and Italy during the European session. Analysts predict an increase in inflation in these countries. So, these reports will hardly affect the euro as traders are well aware of the results. In the afternoon, the US CPI index is due. It is likely to set market trends until the end of this month. If inflation accelerates contrary to economists' forecasts, sell the euro and buy the US dollar. If there are first signs of a decline, the euro and risky assets will climb significantly. The euro/dollar pair could grow as well. Speculators are likely to pay zero attention to data on US Wholesale Inventories.

Scenario No. 1: today, it is recommended to open long positions if the price reaches 1.0220 (the green line on the chart) with a prospect of a rise to 1.0248. At 1.0248 it is better to close long positions and open short ones, keeping in mind a correction of 30-35 pips from the entry point. The euro may advance considerably If the US CPI Index drops. Important! Before opening long positions, make sure that the MACD indicator is above the zero level and it has just started to rise from it.

Scenario No.2: it is also possible to buy the euro today if the price approaches 1.0197. At this moment, the MACD indicator should be in the oversold area, which will limit the downward potential of the pair. It could also trigger an upward reversal. The pair is projected to climb to the opposite levels of 1.0220 and 1.0248.

Scenario No.1: it would be wise to sell the euro if the price hits 1.0197 (the red line on the chart). The target will be the 1.0161 level where I recommend leaving the market and opening long positions, keeping in mind a correction of 20-25 pips from the given level. Pressure on the euro may escalate if US inflation is high again. Important! Before opening short positions, make sure that the MACD indicator is below the zero level and it has just started to decline from it.

Scenario No.2: it is also possible to sell the euro today if the price slides to 1.0220. At this moment, the MACD indicator should be in the overbought area, which will limit the upward potential of the pair. It may also trigger a downward reversal. The pair is expected to slip to the opposite levels of 1.0197 and 1.0161. 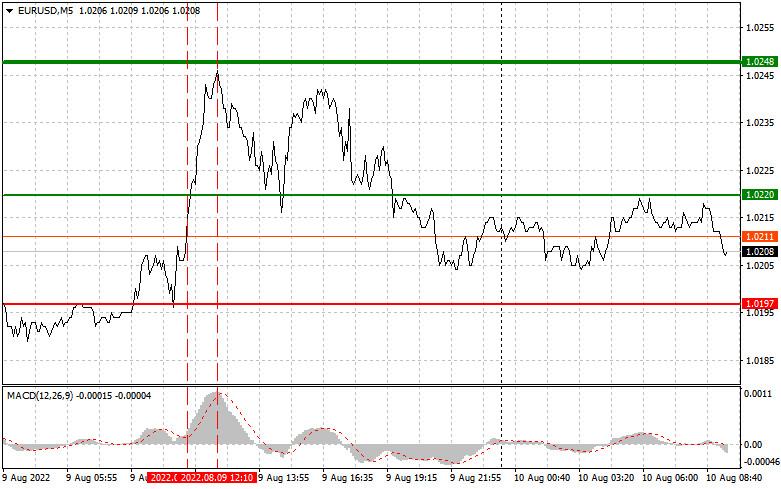 What is on the chart:

The thin green line is the entry point where you can buy the trading instrument.

The thick green line is the estimated price where you can place Take profit or lock in profits manually as the pair is unlikely to rise above this level.

The thin red line is the entry point where you can sell the trading instrument.

The thick red line is the estimated price where you can place Take profit or lock in profits manually as the pair is unlikely to decline below this level.

The MACD indicator. When entering the market, it is important to pay attention to overbought and oversold zones.

Important. Novice traders need to make very careful decisions when entering the market. Before the release of important fundamental reports, it is better to stay out of the market. It helps beginners avoid losses due to sharp fluctuations in the exchange rate. If you decide to trade during the news release, always place Stop-Loss orders to minimize losses. Without placing Stop-Loss orders, you can lose the entire deposit very quickly, especially if you do not use money management but trade in large volumes.

Remember that for successful trading it is necessary to have a clear trading plan, following the example of the one I presented above. Relying on spontaneous trading decisions based on the current market situation is a losing strategy of an intraday trader.