Forex Analysis & Reviews: Analysis of the trading week of August 8-12 for the GBP/USD pair. COT report. 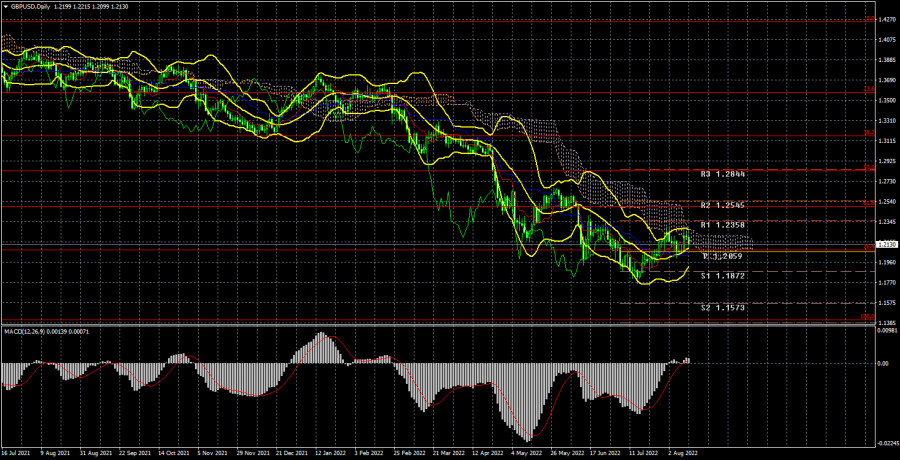 The GBP/USD currency pair has increased by 60 points during the current week. The British pound very zealously began an upward correction and grew quite steadily for several weeks in a row while the European currency was in a side channel. But look now at the 24-hour TF of both pairs. Do you see any drastic differences between their movements over the past month? The pound has adjusted by 500 points in total, which is not surprising since it has always been more volatile than the euro. The pound has also failed to overcome the Ichimoku cloud and the Senkou Span B. We would say that the movements of the last month are almost identical in global terms. And what about the foundation? This week, one more important report was published in the UK than in the European Union. That is, only 1. On Friday, UK GDP dropped in the second quarter, but the drop was weaker than predicted. The British economy has lost only 0.1%, which is absolutely not critical and so far does not fit well with the panic of Andrew Bailey, who called on everyone to prepare for the apocalypse in the form of a five-quarter recession. The pound sterling on Friday declined slightly, but at the same time, the European currency was also falling, with which the report on British GDP had nothing to do. Therefore, there is every reason to assume traders did not even pay attention to the GDP report. The only thing they turned their attention to was the report on American inflation. First, on Wednesday, the dollar fell decently after its publication, and then on Thursday, traders tried to push the pair up even further. However, by the end of Friday, the dollar had recouped almost all the losses. We still believe that it will be extremely difficult for the euro and the pound to show growth until the Fed rate approaches the level at which the cycle of tightening monetary policy can be considered complete.

The latest COT report on the British pound has finally impressed. During the week, the non-commercial group opened 12.9 thousand buy contracts and closed 9.0 thousand sell contracts. Thus, the net position of non-commercial traders increased by 21.9 thousand at once. For the pound, this is a pretty big change. However, the mood of the major players remains "pronounced bearish," which is seen by the second indicator in the illustration above (purple bars below zero = "bearish" mood).It should be noted that in recent months, the net position of the "non-commercial" group has been constantly growing, but the pound shows only a very weak tendency to grow. The growth of the net position and the growth of the pound itself is now so weak (speaking globally) that it is difficult to conclude the beginning of a new upward trend. It is quite difficult to call the current growth even a correction. We also said that the COT reports do not consider the demand for the dollar, which probably remains very high right now. Consequently, strengthening the British currency requires that demand for it grows faster and stronger than the demand for the dollar. And on the basis of what factors is the demand for the pound growing now? Traders have already strenuously ignored the strong statistics from the US and the tightening of the Fed by 0.75% in recent weeks. The pound could have already gone to conquer 2-year lows again.

The non-commercial group has opened 76 thousand sales contracts and 42 thousand purchase contracts. Net positions will have to show growth for a long time to at least equalize these figures.

In the UK this week, apart from the GDP report, there were practically no important events or publications. Of course, it is possible to single out a report on industrial production or the trade balance, but these are much less significant data than GDP. And in any case, the pound was falling on Friday, although the actual value of almost all reports was better than the forecast. Now it is very difficult to say what can help the pound continue to grow. From a fundamental point of view, even the growth the pair has demonstrated over the past month is hardly justified. It was justified only by the need to adjust from time to time, that is, by "technique." In general, the fundamental and geopolitical picture has not changed, so before the price is fixed above the Senkou Span B line, we expect to resumption of the global downtrend.

1) The pound/dollar pair maintains a long-term downward trend but still manages to gain a foothold above the critical line. However, there have been many such fixations in recent months, and the pair resumed the downward trend each time. Thus, cautious purchases are now possible, but it is necessary to take into account the high probability of a resumption of the downtrend based on a range of different factors.

2) The pound continues dangerously close to its 2-year lows and may update them again in 2022. If the pair returns to the area below the critical line, it may trigger a new round of the pound's fall with a target of 1.1410 (100.0% Fibonacci). And these are the absolute lows of the pound over the past 30 years. You can also monitor the rebound from the Senkou Span B line, and formally, there is already such a rebound because the Senkou Span B line will drop to 1.2209 in a couple of days.

Price levels of support and resistance (resistance /support), Fibonacci levels – taregt levels when opening purchases or sales. Take Profit levels can be placed near them;

Indicator 1 on the COT charts is the net position size of each category of traders;

The U.S. dollar index paused its "downward trek" on Thursday after traders played back the release of what they considered the dovish minutes of the Federal Reserve's November meeting. However

How to trade GBP/USD on November 28, 2022. Simple trading tips and analysis for beginners

GBP/USD showed even worse movement than EUR/USD on Friday. If the euro showed at least some form of local movements during the day, then the pound was flat. Again

How to trade EUR/USD on November 28, 2022. Simple trading tips and analysis for beginners

The EUR/USD trade was very boring on Friday. There were no important events or reports in the EU or the US. The market could not react to anything

GBP/USD analysis for November 27. Scotland does not abandon attempts to terminate the union with the United Kingdom.

The wave marking for the pound/dollar instrument currently appears quite confusing, but it still needs to be clarified. We have a completed downward trend section consisting of five waves (a-b-c-d-e)

EUR/USD analysis for November 27. The ECB rate will increase, but the euro cannot increase.

The wave marking on the euro/dollar instrument's 4-hour chart is convincing. The upward portion of the trend has corrected itself. Initially, I believed three waves would develop

9973
Can't speak right now?
Ask your question in the chat.