23.09.202206:52 Forex Analysis & Reviews: Forecast and trading signals for GBP/USD for September 23. COT report. Detailed analysis of the pair's movement and trade deals. The Bank of England has finished off the British currency. 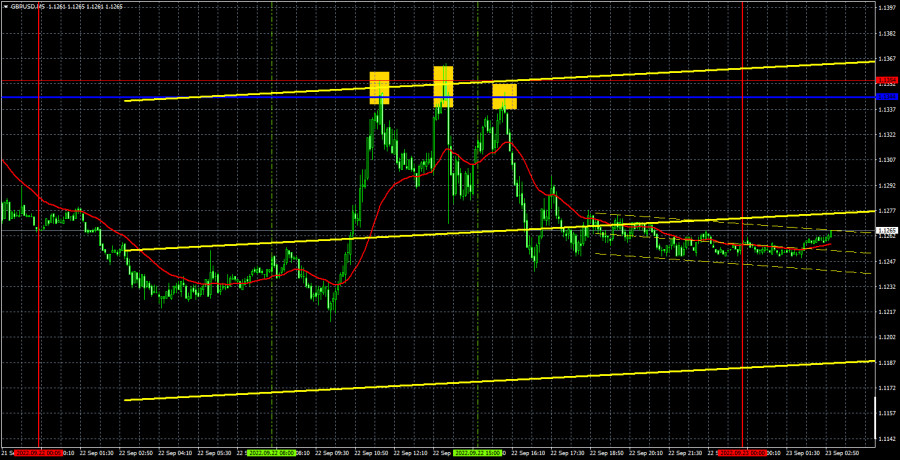 The GBP/USD currency pair managed to update its 37-year lows, adjust and resume the downward trend on Thursday. Now the current low is 1.1212 and hardly anyone could have expected the pound to fall so low. However, this is still far from the limit, as the current fundamental and geopolitical backgrounds allow the British currency to continue to depreciate against the dollar. Do recall that the Federal Reserve raised the rate by 0.75% for the third consecutive time and, in fact, promised to raise it by 0.75% for the fourth time. The Bank of England raised the rate by 0.5%, which also corresponded to forecasts, but once again it did not help the pound in any way. Firstly, the divergence between the rates continues to increase. Secondly, the market continues to ignore all the tightening of the monetary policy of the Bank of England. Thirdly, geopolitics puts pressure on all risky currencies, including the pound. Thus, his new fall is absolutely natural.

As for trading signals, there were three of them yesterday. All three are bounces from the 1.1344-1.1354 area. All three are for short positions. At first glance, it may seem that everything is fine, but these signals should still be clearly beaten in order to make money on them. After the first two signals, the pair went down 30 and 40 points. Thirty points is too little for the signal to be considered correct, and during the second signal the BoE summed up the results of its meeting. Therefore, the second signal should definitely have been ignored, and the first one should have been recognized as false (the transaction on it closed at breakeven or at minimum profit, since the position should have been closed manually at least half an hour before the BoE meeting). The third sell signal, thus, could be worked out, and it brought traders a profit of at least 60 points. 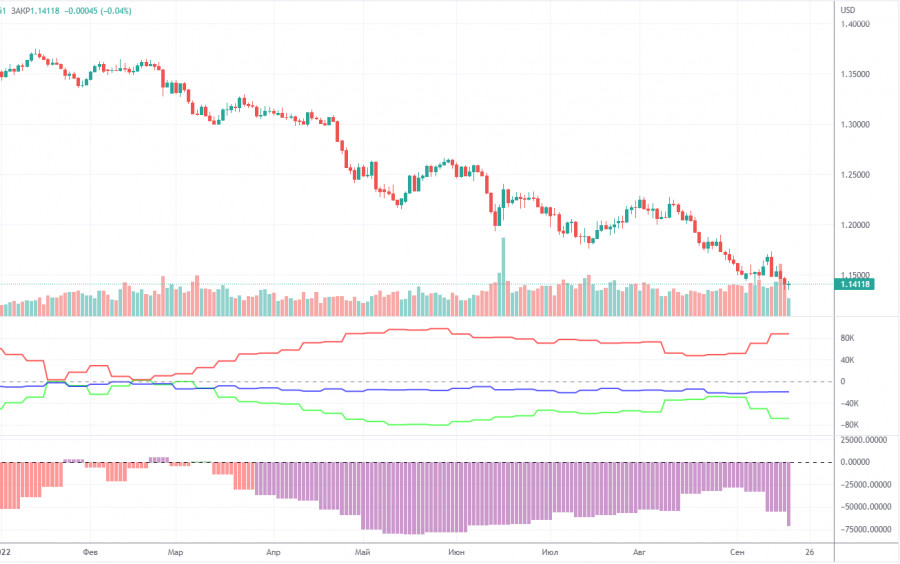 The latest Commitment of Traders (COT) report on the British pound was again very eloquent. During the week, the non-commercial group closed 11,600 long positions and opened 6,000 shorts. Thus, the net position of non-commercial traders decreased by another 17,600, which is a lot for the pound. The net position indicator has been growing for several months, but the mood of the big players still remains "pronounced bearish", which is clearly seen in the second indicator in the chart above (purple bars below zero = bearish mood). And now it has begun a new fall, so the British pound still cannot count on a strong growth. How can you count on it if the market sells the pound more than it buys? And now its decline has completely resumed and multi-year lows are updated almost every day, so the bearish mood of major players in the near future can only intensify. The non-commercial group now has a total of 109,000 shorts and 41,000 longs open. The difference is again almost threefold. The net position will have to show growth for a long time to at least equalize these figures. Moreover, one should not forget about the high demand for the US dollar, which also plays a role in the fall of the pound/dollar pair.

Overview of the EUR/USD pair. September 23. The euro is plunging again, but not hopelessly. The Fed raised the rate by 0.75% and promised to raise it by another 1.25%.

Overview of the GBP/USD pair. September 23. Even the Bank of England's rate hike did not help the British pound.

Forecast and trading signals for EUR/USD on September 23. Detailed analysis of the movement of the pair and trading transactions. 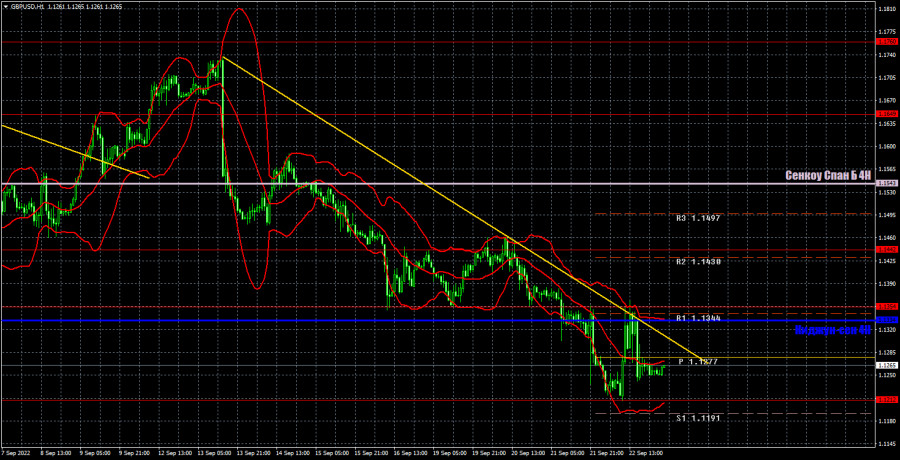 The pound/dollar pair resumed its downward trend on the hourly timeframe, which should not surprise anyone, since two meetings of central banks took place this week. At this time, the pair is located below the lines of the Ichimoku indicator, so there is not a single signal to buy. We highlight the following important levels on September 23: 1.1212, 1.1354, 1.1442, 1.1649, 1.1760, 1.1874. The Senkou Span B (1.1543) and Kijun-sen (1.1334) lines can also be signal sources. Signals can be "bounces" and "breakthroughs" of these levels and lines. It is recommended to set the Stop Loss level to breakeven when the price passes in the right direction by 20 points. The lines of the Ichimoku indicator can move during the day, which should be taken into account when determining trading signals. There are also support and resistance levels on the chart that can be used to take profits on positions. Business activity indices in the service and manufacturing sectors will be published in the UK and the US. However, we do not believe that the market will pay any attention to them after such two important events. Nevertheless, if the actual value of a particular report is very different from the forecast, a reaction may follow.