Life is like a zebra: black stripes turn white, bad news to good news. EURUSD was optimistic about the information that Europe will be able to do without Russian gas this winter. However, this will not save the eurozone from recession. Goldman Sachs believes that the ECB will bring the deposit rate to 2.75% by the end of the first quarter, but this does not guarantee a correction in the main currency pair. The US economy is still firmly on its feet, and the European Central Bank has a very strong competitor across the Atlantic.

Gas prices in the euro area jumped 12% on reports of damage to the Nord Stream pipeline. Germany suspects sabotage, and Denmark takes emergency measures to protect the facility. Despite the fact that blue fuel has not been supplied through the pipeline for a long time, traders have taken into account in the futures quotes the decrease in the likelihood that it will ever begin to flow from Russia.

However, according to a Bloomberg study, Europe can do without gas imports from Russia this winter. Storages are 88% full, demand has fallen amid high prices, forecasters are predicting warm weather in October, and LNG supplies from the US and the Middle East are growing by leaps and bounds. Exports in December–February may exceed last year's figure by 40%. Alas, this will not save the eurozone from recession.

Based on a model of the European energy market and economy, Bloomberg predicts a 1% contraction in the currency bloc's GDP as a base case scenario. Moreover, the decline will begin in the fourth quarter. If the weather turns out to be colder than expected, the gross domestic product will shrink by 5%. 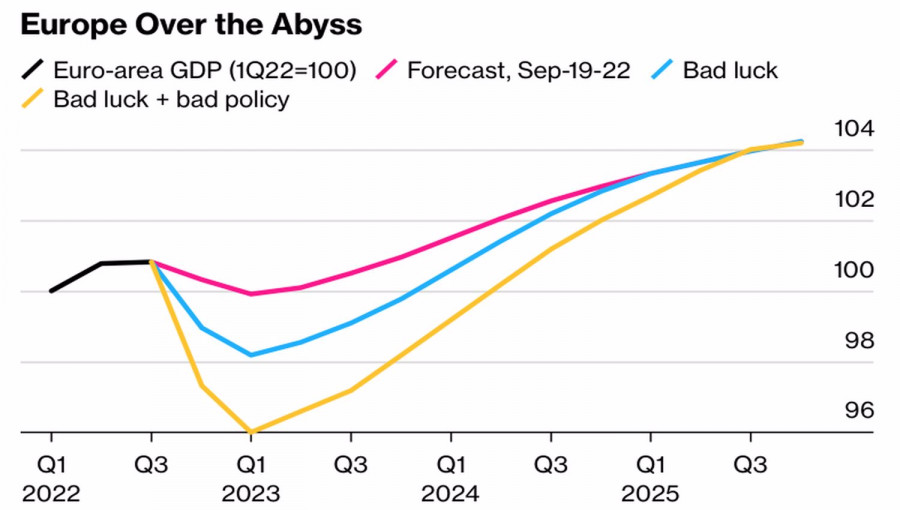 Aggressive monetary restriction of the ECB will only exacerbate the situation. According to Goldman Sachs estimates, the European Central Bank will raise the deposit rate by 75 bps twice more in October and December in 2022, after which it will increase borrowing costs by 50 bps in February. As a result, they will reach a neutral level of 2.75%, and Christine Lagarde and her colleagues will have the opportunity to launch a quantitative easing program. At least, that's how it seems to Lagarde.

In my opinion, if the data on the eurozone economy starts to be very disappointing, which is very likely, the ECB will slow down, which will negatively affect the EURUSD. 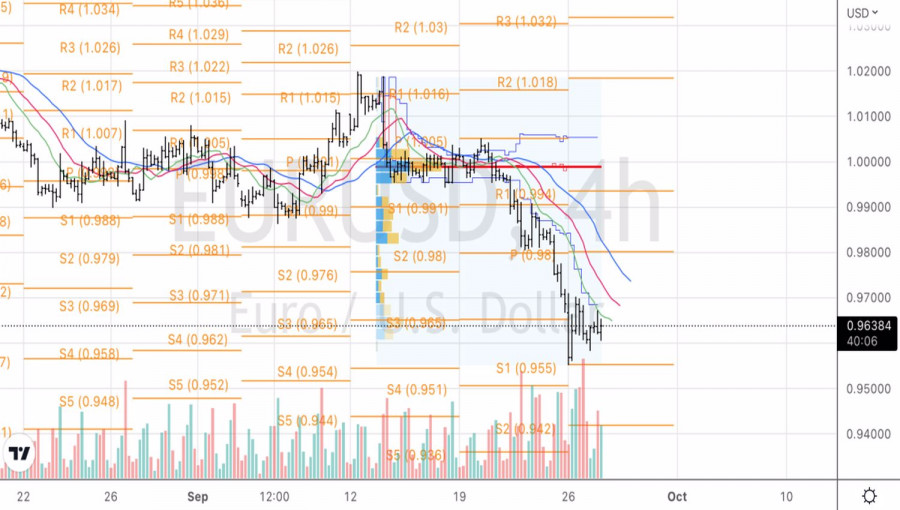 The pressure on the euro is also exerted by the panic in the financial markets due to the fiscal stimulus policy in Britain. According to Atlanta Fed President Raphael Bostic, tax cuts in the UK increase the likelihood of a global recession, as it contributes to increased uncertainty. And in such times, households and companies prefer to wind down their activities. The new president of the Boston Fed, Susan Collins, believes that an external shock could lead to a recession in the US economy. This circumstance strengthens the demand for the US dollar as a safe-haven currency.

5878
Can't speak right now?
Ask your question in the chat.