Forex Analysis & Reviews: How to trade EUR/USD on October 3? Simple tips for beginners. 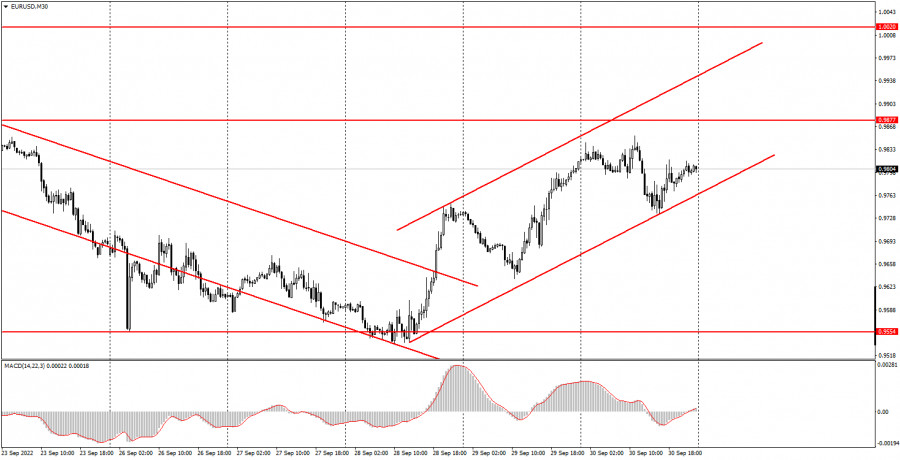 The EUR/USD currency pair traded quite actively again on Friday. In general, the euro remained in an upward trend, which now counts only a few days. The trend is still clearly not pulling, but we have formed an ascending channel in order to better illustrate what is happening in the market. The key and in fact the only important macroeconomic event on Friday was the release of the inflation report in the European Union. Many expected an acceleration in the consumer price index, but few expected such a strong growth. The value for September was 10%, while the previous value was 9.1% and the forecast was 9.7%. Thus, we can safely say that so far all the measures taken by the European Central Bank have not yielded any result: inflation has been growing, and growing, and even accelerating. However, this is not surprising, since two rate hikes are clearly not enough to pay it off. The market reaction to this report followed and turned out to be even quite strong - the pair went down 90 points after the release. However, the fact that the euro is falling can hardly be called logical, because the higher the inflation, the more chances there are for more and more ECB rate hikes in an attempt to curb it. And a rate hike is a hawkish event that should support the euro. The market has long forgotten about it. As a result, the reaction was, but illogical. 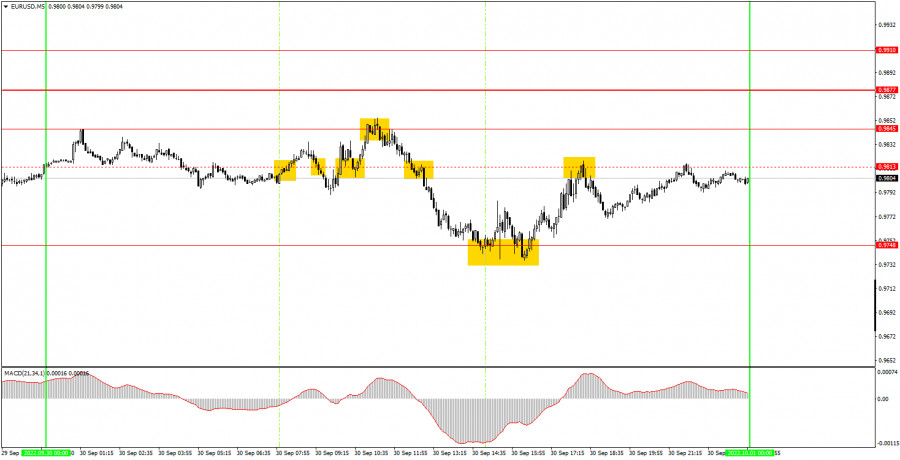 The downward trend has been canceled on the 30-minute timeframe, and a new upward channel has been formed. As long as the price is inside it, you can count on a restrained growth of the euro. From the point of view of the fundamental and geopolitical backgrounds, the outlook for the euro is still rather vague. Much will depend on the upcoming geopolitical events. On the 5-minute TF tomorrow it is recommended to trade at the levels of 0.9636, 0.9748, 0.9845, 0.9877, 0.9910, 0.9952, 1.0020-1.0034. When passing 15 points in the right direction, you should set Stop Loss to breakeven. The index of business activity in the industry for September will be published in the European Union. On the other hand, really important ISM indices for services and manufacturing for September will be published in the US. We believe that in case of a strong deviation of the actual values from the forecast, the market may react to these data.