Forex Analysis & Reviews: How to trade EUR/USD on October 4? Simple tips for beginners. 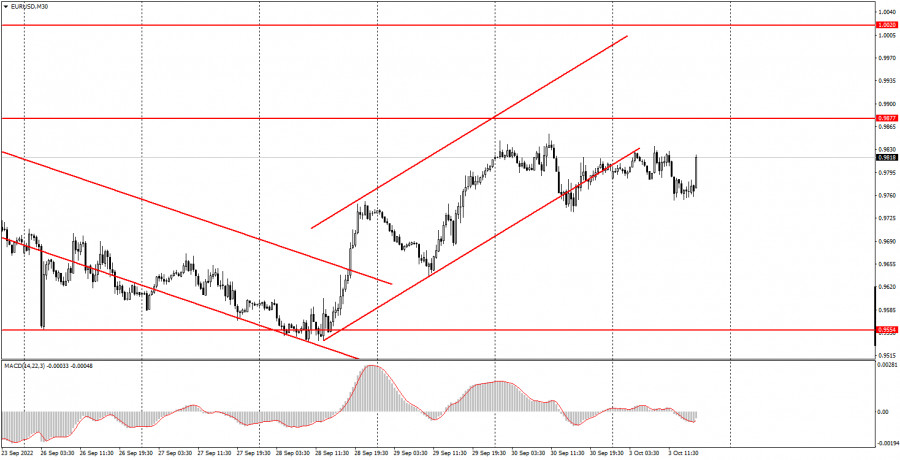 The EUR/USD currency pair stayed in a blatant flat on Monday. Maybe it wasn't as eloquent as it used to be, but the price moved without a particular direction during the day. A little earlier, the price also settled below the ascending channel, which has already cast doubt on its ability to continue rising. Recall that we have repeatedly said that "one should not depend upon a favorable outcome to one's plans until it is certain to occur", and two days of growth from the euro does not mean at all that a new long-term trend will now begin. As you can see, for two consecutive days the euro has had serious problems with continuing the upward movement. The index of business activity in the manufacturing sector for September was published in the European Union on Monday morning, which was only 0.1 weaker than forecasts. However, at the same time, it turned out to be 1.2 weaker than the previous value, that is, a downward trend is evident. And the fact that the index is below 50.0 points to the stagnation of the industry. Thus, the euro's decline in the morning is logical. A report on business activity in the US manufacturing sector was released in the afternoon, which also turned out to be weaker than forecasts, and also caused a fall in the national currency. Therefore, we can say that the pair's movements on Monday were quite logical. 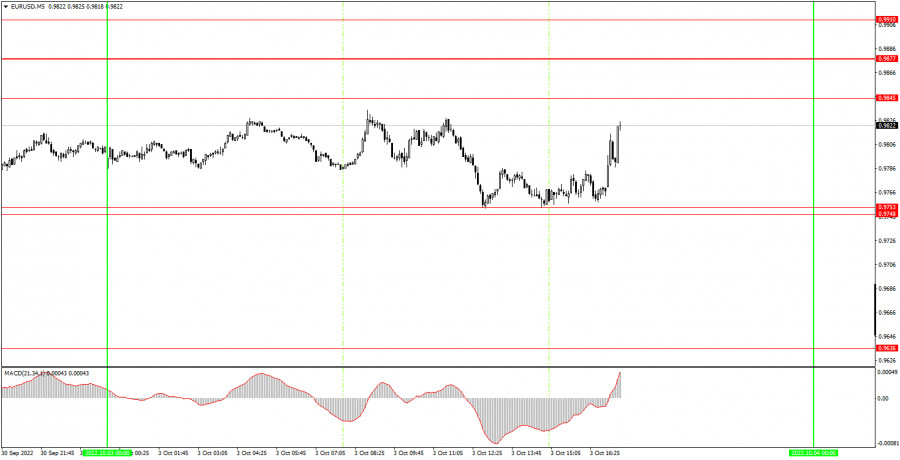 There were no trading signals on the 5-minute timeframe on Monday. The price approached the level of 0.9748 several times, but did not reach it by at least 5 points, which cannot be considered an error when opening positions. Therefore,, novice traders could relax and observe the development of the situation. This week there will be more interesting days with stronger macroeconomic statistics. The pair's volatility was 80 points, which is not so little for an almost empty day, however, there was no trend movement, which is clearly seen in the chart above.

The downward trend has been canceled on the 30-minute timeframe, but the upward trend has already managed to cancel. Thus, this week we are waiting for a new fall in the euro. The really important events are scheduled only for Friday, but we remind you that geopolitical news should also be taken into account, as they also affect the mood of market participants. On the 5-minute TF on Tuesday, it is recommended to trade at the levels of 0.9636, 0.9748-0.9753, 0.9845, 0.9877, 0.9910, 0.9952, 1.0020-1.0034. When passing 15 points in the right direction, you should set Stop Loss to breakeven. European Central Bank President Christine Lagarde will speak in the European Union and there will be nothing else interesting on Tuesday. We believe that Lagarde will not change her previous statements and will continue to stick with the rate hike and the fight against inflation. Theoretically, this can support the euro, but in practice the market has long been familiar with this rhetoric, so it is unlikely that Lagarde will rush to work out a new speech.