Forex Analysis & Reviews: How to trade GBP/USD on October 4? Simple tips for beginners. 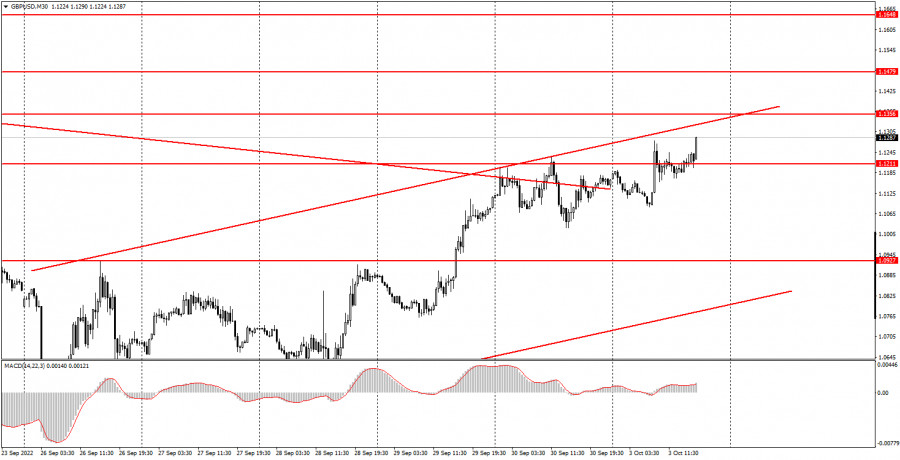 The GBP/USD pair continued its upward movement on Monday, unlike the EUR/USD pair. The pound sterling shows a greater desire to grow, although it is rather difficult to say on the basis of what this happens. There is one assumption: the energy crisis may affect the European Union (especially after the sabotage at Nord Stream), but it is unlikely to affect the UK, which is more energy independent. On the other hand, the UK has enough economic and political problems of its own right now. However, traders pay more attention to geopolitics, so this is probably the case. Thus, in the coming days and weeks, we may well observe an unusual movement of the main pairs: the euro may fall, and the pound may rise. We have formed an ascending channel, which will serve as a guide for the upward trend. A report on business activity in the manufacturing sector was also published in Britain. The indicator increased compared to the previous month and amounted to 48.4, which is still below the key level of 50.0. However, the market responded to this report with long positions on the pound, which is very strange, since in recent months it has not favored "ordinary statistics". We can conclude that the downward trend for the pound is over, as the market uses every chance to buy the British currency. 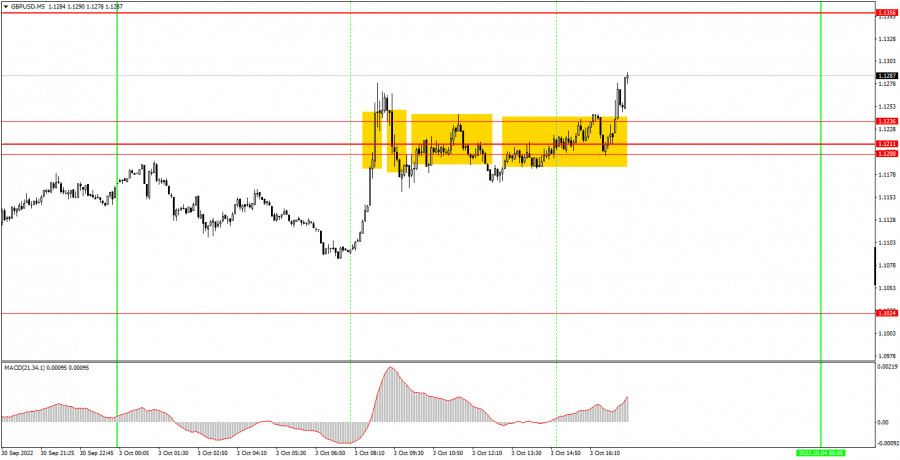 Unfortunately, the nature of the pair's movement was very bad on the 5-minute timeframe. After rising by 183 points in the morning (volatility remains excessively high and it is unlikely that such a movement would have provoked a normal business activity index in normal times), the quotes went flat in the area of 1.1200-1.1236. The price overcame this area several times, forming signals, but there was no morning fuse and the movement never continued in the right direction. Thus, novice traders had to ignore the first trading signal, as it was formed at the very end of the growth. The second sell signal could have been worked out, but it turned out to be false and brought a loss. The next few hours showed that the pair was in a flat, so you should not have traded using the remaining signals.

The pound/dollar pair has formed an upward trend on the 30-minute timeframe and for the first time in a long time has real chances for a strong growth. There may not even be any growth-supporting factors this week, but the pound may still continue to grow based on market sentiment. From our point of view, if it is not bullish now, then it is changing towards bullish. On the 5-minute TF on Tuesday it is recommended to trade at the levels of 1.1024, 1.1200-1.1211-1.1236, 1.1356, 1.1443, 1.1479. When the price passes after opening a position in the right direction for 20 points, Stop Loss should be set to breakeven. There are no major events scheduled for Tuesday in the UK and America. Nevertheless, if the British pound continues to grow on Tuesday, this will definitely indicate the market's readiness to finish with the massive sell-offs of the pound. We believe that the pound fell excessively and all the factors of its decline have already been worked out.