Given that inflation in the Euro area continues to break records, it is possible that today's report on producer prices will make a lot of noise, especially when growth turns out as predicted, that is, by 43.1% y/y. This data is largely tied to energy products, but this does not negate the fact that prices will continue to remain high even against the aggressive policy of the European Central Bank. This means that everyone should pay attention to the meeting of Finance Ministers as something may be adopted to support the population. In the afternoon, a number of Fed representatives will speak, followed by the release of data on manufacturing orders in the US. The latter will not be of great interest to traders, so there is a chance for a continued rise in EUR/USD. 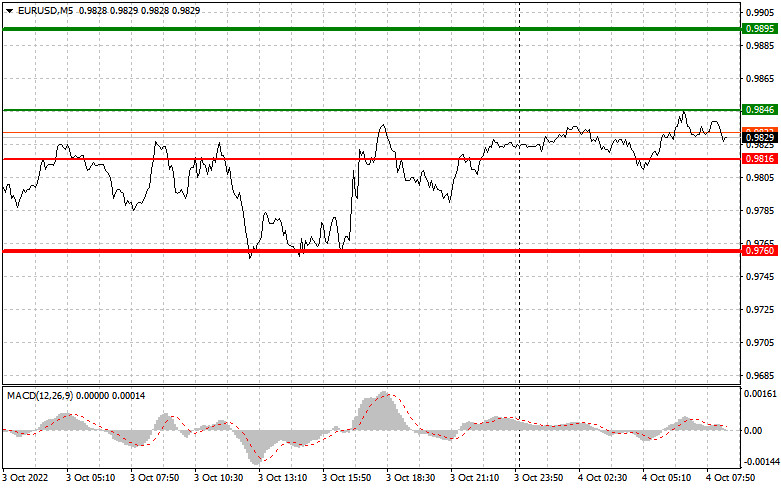 Buy euro when the quote reaches 0.9846 (green line on the chart) and take profit at the price of 0.9895. Growth will occur if economic reports in the Euro area exceed expectations. Take note that when buying, the MACD line should be above zero or is starting to rise from it.

Sell euro when the quote reaches 0.9816 (red line on the chart) and take profit at the price of 0.9760. Pressure may return after the speeches of Fed representatives. Take note that when selling, the MACD line should be below zero or is starting to move down from it.

USD/JPY: downside continuation from below 133.75

The USD/JPY pair increased a little today only because the US reported positive economic data. The Non-Farm Employment Change and Average Hourly Earnings came in better than expected. You knew

The price of gold climbed as much as 1,804 today where it has found resistance. It crashed after the US data dump. Now, it was trading at 1,785

8803
Can't speak right now?
Ask your question in the chat.