Yesterday, there were several excellent entry points. Now, let's look at the 5-minute chart and try to figure out what actually happened. In the morning article, I turned your attention to the 0.9903 level and recommended making decisions with this level in focus. A decline to 0.9903 occurred rather quickly. After the first downward test, the bulls defended this level, giving a buy signal. The pair climbed by 17 pips. However, a breakout took place after the second test of 0.9903. It provided a good entry point into short positions, which resulted in a drop to 0.9855. The pair tumbled by 50 pips. A new buy signal appeared after a false breakout of 0.9855. The pair jumped by 20 pips. 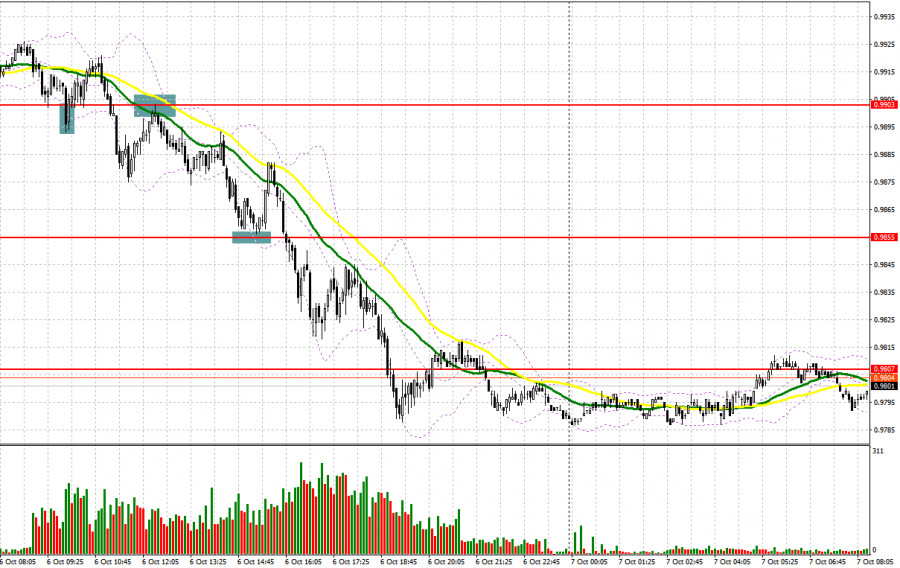 The pressure on the euro is likely to persist in the first half of the day. However, the bulls could act quite aggressively when approaching the nearest support level of 0.9761. Germany's Industrial production report or Retail Sales data will hardly affect the trajectory of the pair. Yet, weak figures may push it to 0.9761. A false breakout of this level will give a buy signal with the prospect of a rise to 0.9809. However, further movements of the pair will be clearer only after the release of the Nonfarm Payrolls report. Economists reckon that this report is a gauge for the Fed when making monetary policy decisions. So, this report may also significantly impact the future steps of the regulator on aggressive tightening. The bulls are likely to take the upper hand only after a breakout of 0.9809 and a downward test of this level. It will force the bears to close Stop Loss orders, providing an additional signal to open long positions with the possibility of a jump to 0.9841. However, even consolidation above this level will hardly trigger a trend reversal. Only a rise above 0.9841 and the resistance level of 0.9879 will weaken the bear market, which has been unfolding recently. A more distant target will be the resistance level of 0.9912 where I recommend locking in profits. If EUR/USD declines and bulls show no activity at 0.9761, the pressure on the euro will increase. It may fall to 0.9725. It is better to open long positions at this level after a false breakout occurs. You can buy EUR/USD immediately at a bounce from 0.9687 or 0.9646, keeping in mind an upward intraday correction of 30-35 pips.

The bears managed to assert strength. Their main task for today is to protect the nearest resistance level of 0.9809. If the EU economic reports are downbeat, they are likely to do so. A false breakout of this level will give an excellent entry point into short positions, pushing the pair down to the 0.9761 level. A breakout below this level may occur only after the release of the NFP report. I advise selling from 0.9761 only after an upward test. It will generate an additional sell signal. Bulls will have to close Stop Loss orders. The pair could decline to 0.9725. A more distant target will be the 0.9687 level where I recommend locking profits. If EUR/USD climbs during the European session and bears show no energy at 0.9809, demand for the pair will increase. It may lead to a strong upward correction. In this case, it is better to cancel short positions until a false breakout of 0.9841 takes place. You can sell EUR/USD immediately at a bounce from a high of 0.9879 or 0.9912, keeping in mind a downward intraday correction of 30-35 pips. 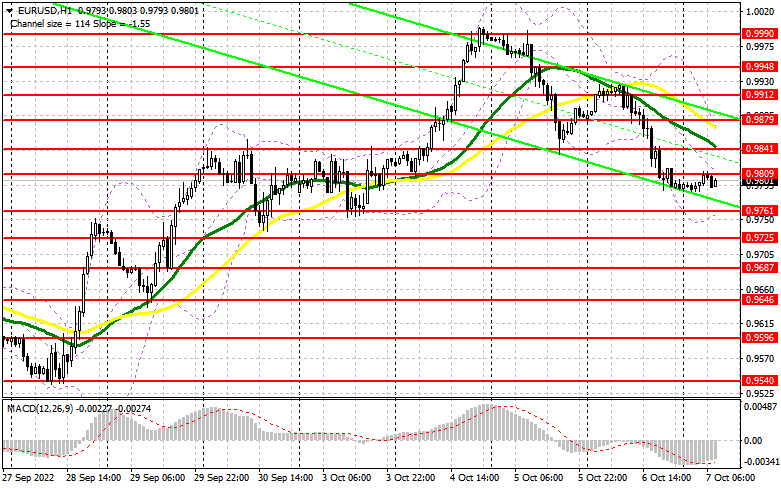 According to the COT report from September 27, the number of both short and long positions increased. After the central banks' meetings, the euro was under considerable pressure caused by the comments provided by European and US politicians. However, the currency managed to cope with it and now it has every chance to cover, though for a short period of time. The fact is that inflation in the EU has already exceeded 10.0%. In autumn and winter, the situation will only aggravate. That is why the euro will hardly show considerable growth. The worsening geopolitical situation in the world, which is mainly affecting the eurozone, may cause a considerable slowdown in the local economy, which is likely to slip into a recession as early as next spring. Soon, the eurozone will disclose reports on activity in various sectors. A decline may cap the pair's upward potential. The COT report unveiled that the number of long non-commercial positions increased by 2,172 to 208,736, whereas the number of short non-commercial positions surged by 1,824 to 174,939. At the end of the week, the total non-commercial net position remained positive and amounted to 33,797 against 33,449. This indicates that investors are taking advantage of the moment and continue to buy the cheap euro below parity, as well as accumulate long positions, expecting the end of the crisis and the pair's recovery in the long term. The weekly closing price collapsed to 0.9657 from 1.0035.

EUR/USD is trading below 30- and 50-period moving averages. It means that the bears are trying to take control.

If EUR/USD advances, the indicator's upper border at 0.9850 will act as resistance.

The EUR/USD pair extended its growth as the Dollar Index slipped lower. It's trading at 1.0552 at the time of writing. As you already know, the bias remains bullish

In my morning review, I mentioned the level of 1.2179 and recommended entering the market from there. Let's see what happened on the 5-minute chart. A decline and a false

In the morning article, I turned your attention to the level of 1.0525 and recommended making decisions on market entry with this level in focus. Now let's take a look

Therefore, following a successful short initiative on Friday, gold prices declined by 50%, returning to the range of profitable sales. We provide a trading suggestion to bring down gold quotes

The third estimate of GDP for the third quarter released by the European statistics agency Eurostat yesterday showed that the European economy expanded by 2.3% year-on-year and 0.3%

The US dollar index rallied through the 105.45-50 levels on Wednesday before finding resistance and pulling back. The index is seen to be trading close to 104.85 at this point

There were several good entry signals yesterday. Let us have a look at the 5-minute chart and see what happened. In my morning outlook I highlighted the level of 1.2146

Yesterday, a few entry signals were made. Let's look at the M5 chart to get a picture of what happened. In the previous review, we focused on the mark

As a result, yesterday's trading day ended with sales in the American session, taking sellers' stops simultaneously. You can now choose yesterday's short impulse on America as a short initiative

Trading plan for EUR/USD and GBP/USD on December 8

The third estimate of the EU GDP for Q3 2022 stands at a slightly higher level than in the first two estimates. The EU economic output slowed down its annual

3763
Can't speak right now?
Ask your question in the chat.