Good decisions are made through experience. And experience arises as mistakes accumulate. Everyone is wrong. The Federal Reserve did this last year when it argued that high inflation was temporary. This is where the financial markets are expecting a dovish turn from the Fed. The central bank will not throw a lifeline to stocks, bonds, or the US economy. At the same time, the pace of tightening monetary policy looks so impressive that the risks of accidents arising from time to time in the financial markets are very high. And in times of panic, EURUSD bears feel like a fish out of water.

FOMC officials, including the respected New York Fed President John Williams, have repeatedly said that positive real rates are needed to bring inflation back to the 2% target. With the Fed projected by the end of the cycle of monetary restriction of the cost of borrowing at 4.6%, inflation must fall below this mark in order for the central bank to achieve a result. This requires a significant tightening of financial conditions, which is currently going faster than real US Treasury yields are rising.

Dynamics of financial conditions and real yields of US bonds 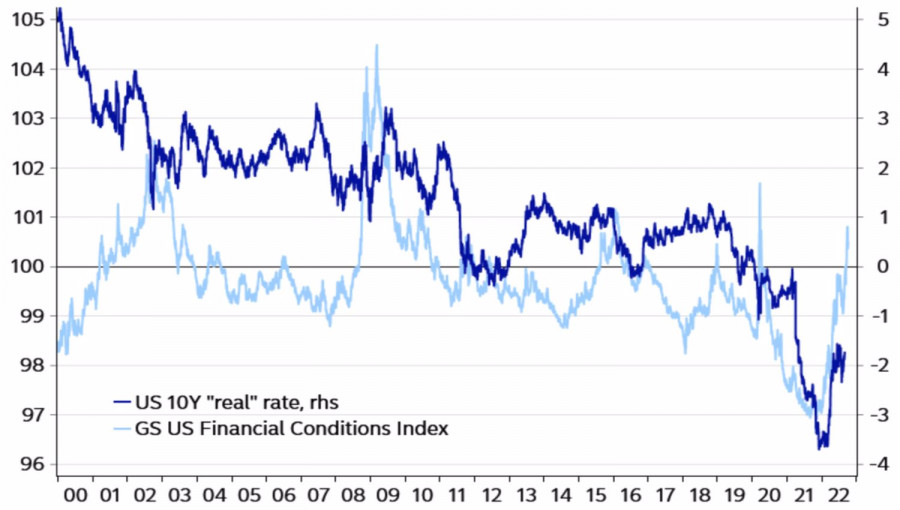 So the Fed has a clear plan. The question is whether the US economy can withstand such an aggressive cycle of monetary tightening. So far, judging by the data on business activity and other indicators, the US is coping. The same can be said about the labor market. An increase in employment outside the agricultural sector by 263,000 against 250,000 predicted by Bloomberg analysts and an unexpected decline in unemployment from 3.7% to 3.5% speak only about one thing. About stability. The Fed even with a 300 bps increase in borrowing costs failed to properly cool the labor market, which means that its job is far from done.

If CME derivatives were expecting a 125 bps increase in the federal funds rate before the important release, then after the September statistics, the figure could rise to 150 bps. Let me remind you that the aggressive tightening of the Fed's monetary policy is one of the three drivers for the strengthening of the US dollar to its highest level in 20 years. The other two are strong demand for safe-haven assets and American exceptionalism. 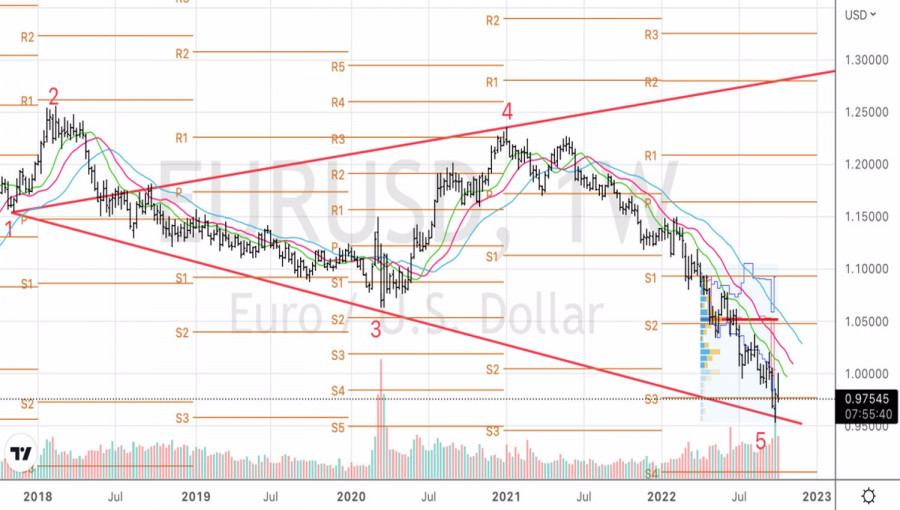 The US really looks better than the eurozone mired in the energy crisis and China weighed down by outbreaks of COVID-19. The IMF plans to lower its global economic growth forecasts, and the WTO has already done so. Usually, upward trends in the US dollar broke when the US GDP began to lose to its world counterpart, but so far this is out of the question.

Technically, on the EURUSD weekly chart, the trend could have reversed thanks to the Wolfe Wave pattern. At the same time, you need to understand that in order to reverse the trend, it requires the return of quotes above 1.05, and before that, now it's like before the moon. On the contrary, the formation of a pin bar gives grounds for short positions in the direction of 0.95 and 0.92.