Thanksgiving day, the closing of the U.S. stock markets and the outflow of liquidity caused the EUR/USD pair to get bored at the end of the last full week of fall. Not surprising, given the tumultuous moves before that. The dollar started the week in good condition and ended it in grief, completely giving up the initiative to the euro. Thanks to the strong data and hawkish speeches of the European Central Bank officials, the euro reclaimed its spot by hitting its 5-month highs and looks forward to important data on eurozone inflation and the US labor market.

Strong German GDP statistics for the third quarter also boosted the morale of the euro fans. Positive consumer sentiment, business activity and the business climate were followed by encouraging news from the German economy. It expanded not by 0.3%, but by 0.4%, i.e. it was more resilient to numerous troubles, including the energy crisis, than previously thought. The main driver of growth was the consumers, whose activity increased by 1%. 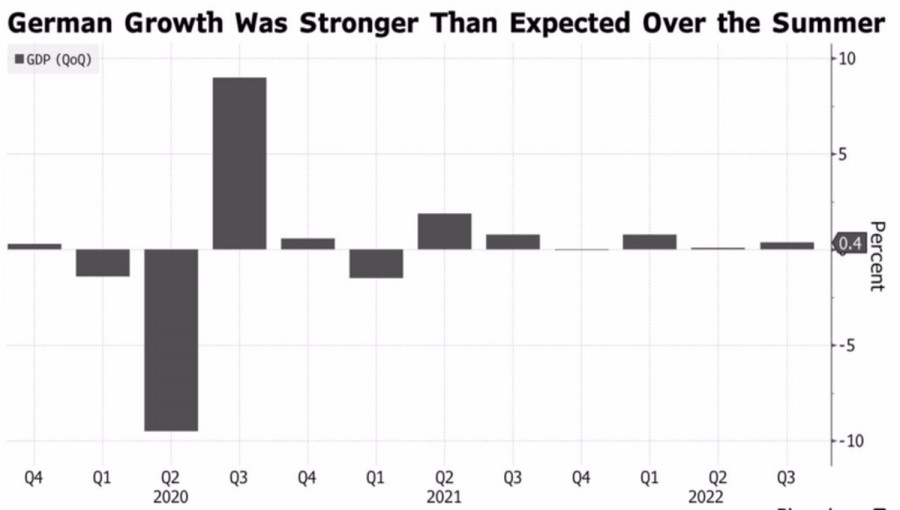 The latest data suggest that the recession in the eurozone will be shallow and short-lived, which supports the single currency. The market is optimistic, however the Institute of International Finance decided to add a minor hitch.

According to the trade association, which was one of the first to predict the parity in EURUSD, the armed conflict in Ukraine will develop into an eternal war. It will not end in 2023, and the countries that are close to it will suffer first. In particular, the eurozone, whose GDP will shrink 2% next year due to a sharp decline in consumer and business confidence. The U.S. economy will expand by a modest 1% as the Federal Reserve's tightening of monetary policy will have a noticeable effect. The main driver of global GDP will be China, which will defeat COVID-19 and finally open its economy. However, China's efforts will not be enough. The world gross domestic product in 2023 will increase by 1.2%, which will be its worst performance since 2009.

It looks like the glass is half empty for the Institute of International Finance, which provides hope to the EUR/USD bears. If the world economy feels as bad next year as it has this year, or maybe even worse, then getting rid of the U.S. dollar is not a good idea. The greenback is the currency of the pessimists. 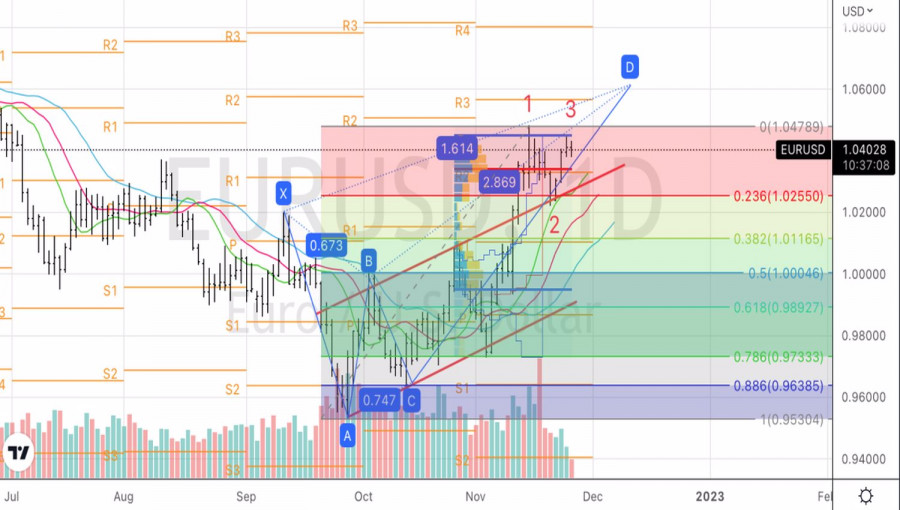 In the short-term, the dynamics of the main currency pair will be determined by releases of data on European inflation and U.S. labor market. Slowing consumer prices in the eurozone and U.S. employment are the keys to reduce the speed of monetary easing by the ECB and the Fed, so EURUSD risks showing mixed dynamics.

Technically, the pair has an opportunity to continue the rally towards the 161.8% target on the Crab pattern and to win back the 1-2-3 Reversal pattern. In this regard, let's sell the euro on a breakout of support at 1.038 and 1.033 and buy it in case it grows above 1.044.