Yesterday, Federal Reserve Chairman Jerome Powell delivered a speech. From his message, it became clear that the Fed will raise the rate by 0.50% at the December meeting (on the 14th) in order to avoid recession as an effect of the rate hike being too fast, although he confirmed that the tightening period itself may take longer and the final rate higher. Also, according to ADP data, there were 127,000 jobs created in the private sector in October against expectations of 200,000. As a result, the dollar index lost 0.79% and the euro gained 0.77% (76 points). 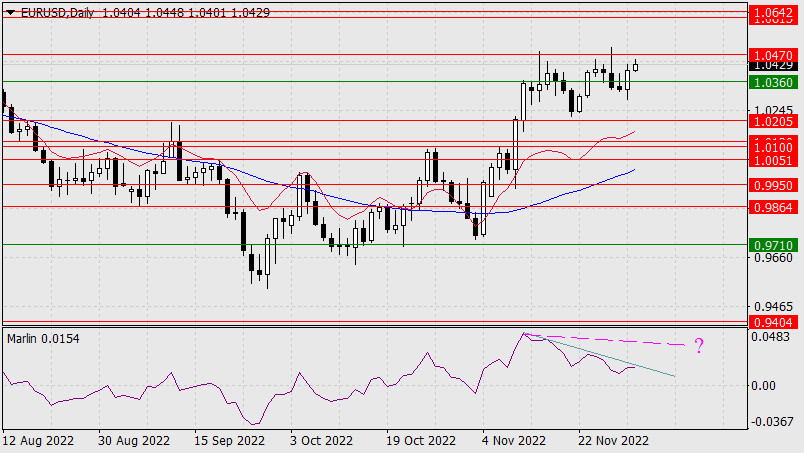 Now the euro will try to break through the nearest resistance at 1.0470 and reach the target range at 1.0615/42. Investors are already focusing on the weaker employment data than the economists' consensus forecast (200,000 nonfarm) suggests.

As a consequence, if the price rises quickly, a divergence at a flatter angle is possible (dashed line on the chart). If the price settles above the target range, the growth may extend to the next target range at 1.0758/87 to the support area of April 14-19 and resistance on May 30. But we look at such growth with doubts, since the current growth since September is still a correction. 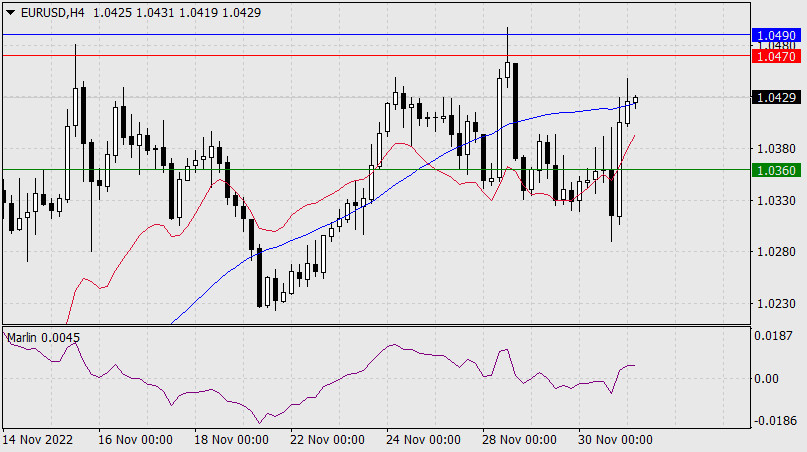 On the four-hour chart, the price crossed the MACD line, and the Marlin oscillator has moved into the positive area. We expect the price to reach the nearest range of 1.0470/90, where the price was staying on November 28. Staying above the range opens the way to 1.0615/42. Of course, if tomorrow's US labor data turns out to be weak. If results come out strong, then the euro might confuse traders in a sideways trend for another two weeks, until the Fed meeting.

According to the 4-hour chart, we can see that the British pound is trading within a downtrend channel formed since January 13. In case there is a pullback towards 1.2374

Bulls try to reverse trend in the Dollar index.

The Dollar index is trading around 102.25 after making a low around 101.47 4 sessions ago. Price has stopped the decline at the 50% Fibonacci retracement level. In previous posts

Hi everyone! The EUR.USD pair rose higher moving in the sideways channel. Later, it dropped to the lower border of the channel. However, it managed to rebound to 1.0900

Currently on the 4-hour chart the main EUR/USD currency pair seems to be trying to break below the 1.0838 level which happens to be the Equal Low area

On the 4-hour chart, the main USD/JPY currency pair, although seen moving downward in the channel, which indicates that the bias is in a bearish condition. It appears that hidden

Let's take a look at the technical picture of USD/CAD,AUD/USD, Oil and Bitcoin

On the hourly chart, the GBP/USD pair reversed to the downside and fell to the level of 1.2342 on Monday. Rebounding from this level, the British currency may strengthen

The situation has not changed much over the past 24 hours. The pair is still holding near the support level of the daily short-term trend (1.0848). Consolidation below this level