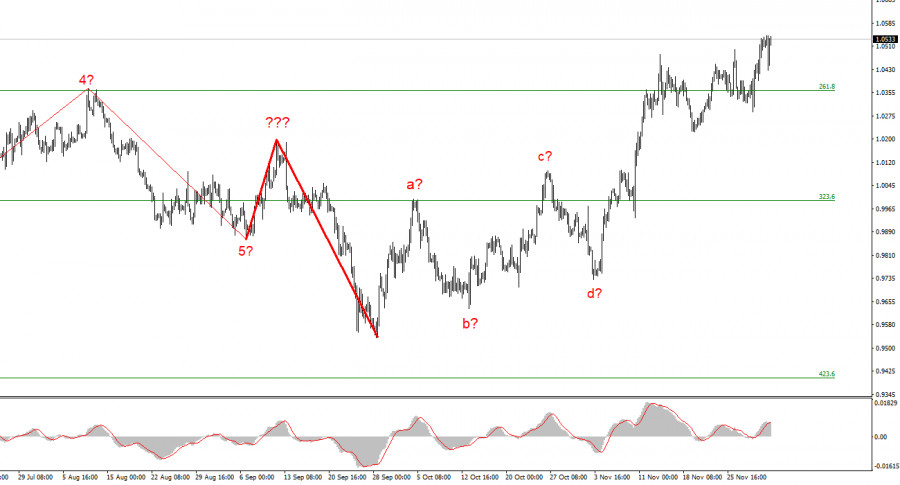 The wave marking on the euro/dollar instrument's 4-hour chart still appears quite accurate. However, the entire upward portion of the trend is starting to get more complicated. It has already assumed a clear corrective and somewhat prolonged form. A-b-c-d-e waves have a complex correction structure that we have discovered. Since wave e is much higher than the peak of wave C, if the wave markings are accurate, construction on this structure may be nearly finished. In this instance, it is anticipated that we will construct at least three waves downward, but if the most recent phase of the trend is corrective, the subsequent phase will probably be impulsive. Therefore, I am preparing for a new, significant decline in the instrument. The market will be ready to sell when a new attempt to breach the 1.0359 level, which corresponds to 261.8% Fibonacci, is successful. On the other hand, the retraction of quotes from reaching lows this week suggests that the entire wave may end up longer and that the instrument's most recent decline is not the first wave of a new descending section. Consequently, the scenario involving the first two waves of a new downward trend segment is rejected. Because there isn't an increase in demand for US currency, the wave pattern is generally starting to become muddled.

The demand for the dollar has risen, but only momentarily.

On Friday, the euro/dollar instrument increased by ten basis points. This number in no way represents the state of the market on Friday. During the day, the instrument fell by 100 basis points before rising by the same amount. Naturally, the decline was brought on by American statistics. The total number of nonfarm payrolls came in at 263,000, exceeding market expectations by 60,000. Remember that the ADP report, released earlier this week, indicated that only 129 000 jobs would be created outside the agricultural sector. The market has recently decreased demand for US dollars because it anticipated that the Payrolls report would also be weak. But as it turned out on Friday, the release of the Payrolls report didn't affect anything. Its value turned out to be higher than anticipated. Still, the demand for the dollar only rose for a short time (about an hour) before the market started to reduce it again, which caused the instrument's overall value to increase.

What is happening with the US currency now cannot be expressed in words. It would be possible to comprehend why the dollar declined on Friday if additional US reports proved weak. Although the unemployment rate remained unchanged in November at 3.7%, average wages increased more than the market anticipated. Therefore, all three American reports exceeded expectations, so a few hours after their release, demand for US currency started to decline. This inquiry is especially pertinent if we remember that the wave markings advocated constructing at least one more downward wave. In other words, almost all of Friday's arguments favored lowering the instrument, but the day ended with a raise, further complicating the overall wave picture. We could now face endless complications from the trend segment already ascending. 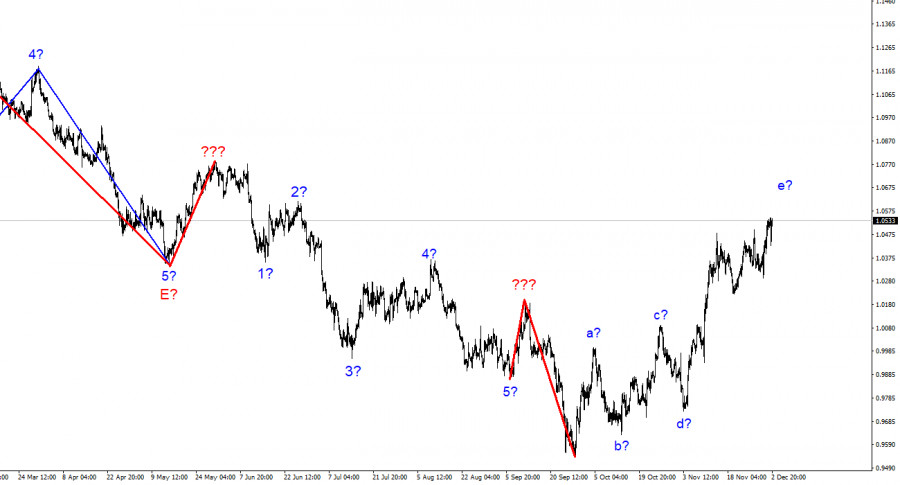 I conclude that the upward trend section's construction is complete and has increased complexity to five waves. As a result, given that the MACD is signaling "down," I advise selling with targets close to the estimated 0.9994 level, which corresponds to a 323.6% Fibonacci ratio. The trend's upward portion could become more complicated and take on a longer form, and the likelihood of this happening is increasing daily.

EUR/USD is again testing support at 1.0835. A break below here will confirm that wave B is complete and wave C lower to the ideal target area between 1.0437

The wave analysis for the pound/dollar pair now appears rather complex, doesn't call for any clarifications, but starts to diverge significantly from the analysis of the euro/dollar pair. Our five-wave

EUR/USD. Analysis for January 30. The week began quietly, and the most interesting events are yet to come.

The wave analysis for the euro/dollar pair on the 4-hour chart has not yet changed and is still complex. The upward section of the trend has taken on a pronounced

In the coming days, the pound is expected to trade sideways along the support zone. The second half of the week may be more volatile, and the pair may resume

It has been a couple of weeks since we saw USD/SGD break below the S/H/S top neckline near 1.3256. With this break, the S/H/S top was activated for a decline

The euro/dollar instrument's 4-hour wave marking hasn't changed much recently and is still getting more intricate, and the entire upward component of the trend is still being stretched

As we said yesterday, it was possible that Tesla would move closer to resistance near 169 before topping and that's exactly what we now are seeing about Tesla. Despite

853
Can't speak right now?
Ask your question in the chat.