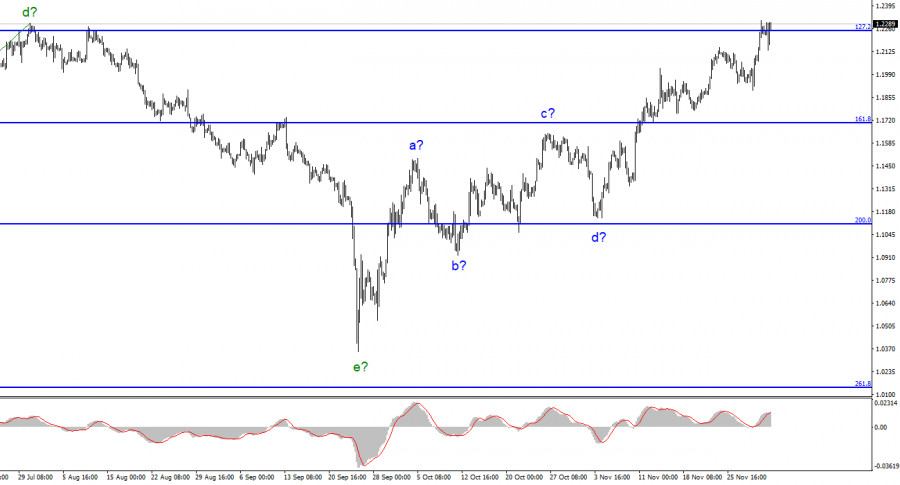 The wave marking for the pound/dollar instrument currently appears quite confusing, but it still needs to be clarified. We have a five-wave upward trend section, which has taken the form a-b-c-d-e and may already be complete. As a result, the instrument's price increase may last a while. Therefore, both instruments are still in the process of developing an upward trend segment, which will be followed by the start of a mutual decline. Recently, the British pound's news background has been so varied that it is challenging to sum it up in one word. The British pound had more than enough reasons to rise and fall. As you can see, it primarily went with the first option. The internal wave structure of wave e has become more complicated this week due to the rise in quotes over the previous week. I am currently waiting for the decline of both instruments. Still, these trend sections may take an even longer form because the wave marking on both instruments allows the ascending section to be built up to completion at any time.

The Fed is indicating that monetary policy will be tightened.

The pound/dollar exchange rate on Friday increased by 45 basis points. The dollar displayed positive dynamics for a brief period, and all three US reports were positive, but it wasn't enough to support further gains. The market did not react as it should have on Friday. Given that the number of payrolls turned out to be high, unemployment did not rise, and wages increased more than anticipated, it was anticipated that demand for US currency would increase significantly. However, as I previously stated, the US dollar could not take hold of the hard-won positions. Thus, yet another excellent opportunity to finish building the suggested wave e, and the upward portion of the trend has yet to be recovered. Even though the news context is not calling for sales for the first time, we are once more observing an increase in the instrument.

The ECB, Fed, and Bank of England meetings will occur in December. In anticipation of these meetings, the market is already moving its instruments. Recall that the Fed will raise interest rates by only 50 basis points, or almost 100%, while the ECB and the Bank of England still have a 75% chance of tightening monetary policy. As a result, the market favors the euro and the pound more. However, the ECB and the Bank of England will raise their interest rates by 50 basis points and abandon their aggressive stance. In this instance, the recent spike in instrument sales was unfounded. Even though the news background does not support it, I anticipate the development of a new downward trend segment. The market's reluctance to raise demand for the dollar contradicts this. As a result, the current wave markup fails, and sometimes it is difficult to explain why the US dollar is falling. 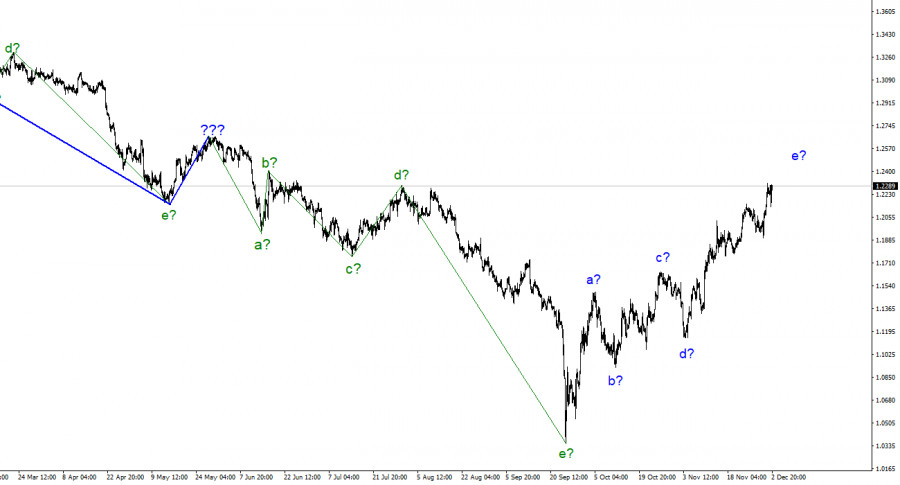 GBP/USD. Analysis for January 26. US GDP report may support the dollar

EUR/USD. Analysis for January 26. The market does not want to be objective

Tesla has seen a correction just as we predilected in our article from January 10th. The rally to 144 could be enough, but we are not blind to the possibility

EUR/GBP has seen an expanding leading diagonal as sub-wave i/, which has been followed by an expanding flat correction that still could move a bit lower into the support area

GBP/USD. Analysis for January 25. Has the pound started to form a corrective wave recently?

EUR/USD. Analysis for January 25. Statistics from the European Union again prevented the euro from falling.

EUR/USD is completing the corrective wave from 1.0835 and should soon start a new descent towards the ideal corrective target area between 1.0437 - 1.0500 to complete wave

GBP/USD. Analysis for January 24. The British pound declined after boring reports from Britain.

EUR/GBP has been consolidating within a rectangle since early October 2016 and looks set for the next challenge key resistance at 0.9306. A break above here should confirm the rally

703
Can't speak right now?
Ask your question in the chat.