Forex Analysis & Reviews: Bitcoin is losing its local bullish potential amid sellers' activity: should we wait for BTC to fall?

Over the past week and a half, the main cryptocurrency has formed a solid, albeit local uptrend. Buyers bought off the local bottom near the level of $15,600, afterwards it increased. As a result, Bitcoin reached a local high of $17,400.

Subsequently, the cryptocurrency failed to cope with the growing pressure of sellers, and the price rolled back to the support level of $17,000. Thus, Bitcoin confirmed the weakness of the current uptrend and the low probability of pushing buyers to become even more active.

Most investors remain neutral towards BTC and continue to actively accumulate the cryptocurrency. However, it is important to emphasize that there is no consensus among all categories. This suggests the need for further consolidation, as the current bull positions do not allow the development of a full-fledged uptrend. 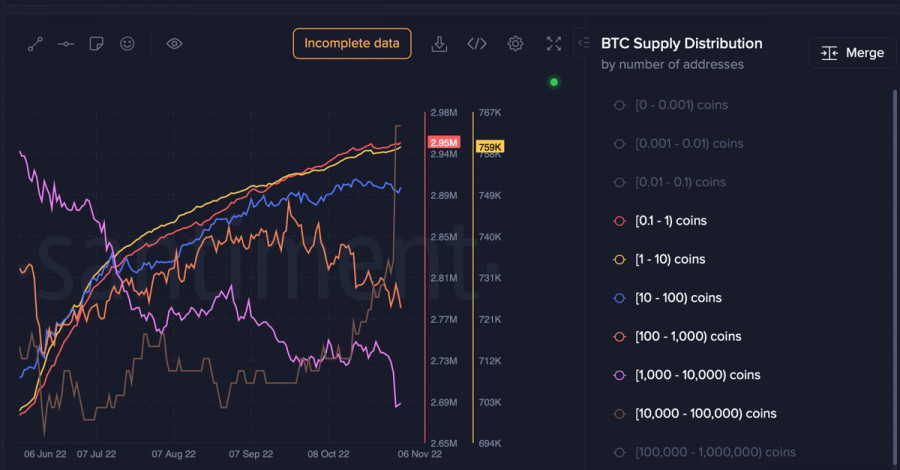 Glassnode analysts report that the number of addresses holding more than 1,000 BTC reached a two-year low. At the same time, analysts see "whales" and smaller addresses being active, which absorb market volumes. The main trigger for this was the fall in the price of BTC in October.

It is also reported that Bitcoin's mining difficulty adjustment dropped 7.32% lower, and it was the largest reduction this year. The updated stats confirm the significant problems of mining companies, which are on the verge of bankruptcy.

Bitcoin's main network metrics are showing a slight increase, which is a positive signal considering the trend of the last few days. The number of unique addresses in the BTC network is growing in parallel with trading volumes. This is an indirect confirmation that buyers are becoming active. 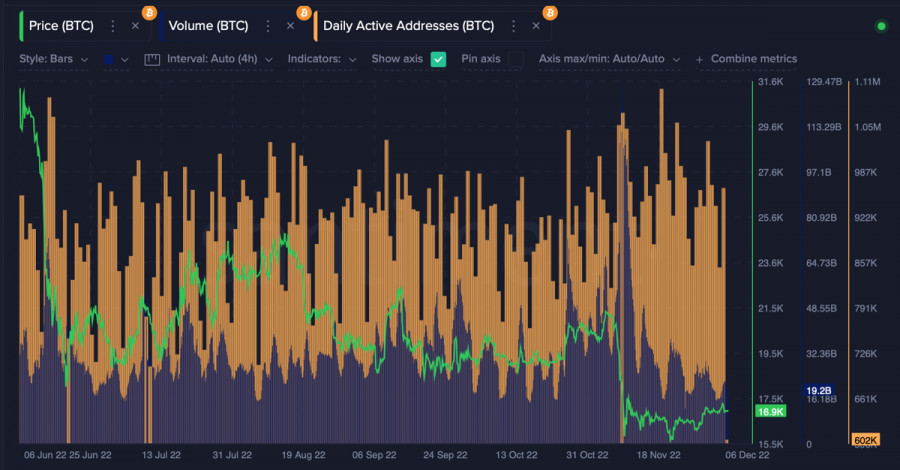 However, it is not necessary to talk about strengthening the current local trend, since there is no obvious dynamics. Given the current stagnation of Bitcoin, it is likely that activity will decrease. Otherwise, we should expect further upward movement from BTC.

Bitcoin has made its first full-fledged attempt to go beyond the triangle. Bulls tried to break through the $17,400 level by gradually increasing volumes. However, bears near the limit offset the bulls' attempts.

The $17,400 level is the main resistance level, as the 200 EMA and the descending trend line pass near it. Also, a large number of short positions and a zone of interest for bears are concentrated near $17,400. The combination of these factors offset bullish attempts to break out of the triangle. 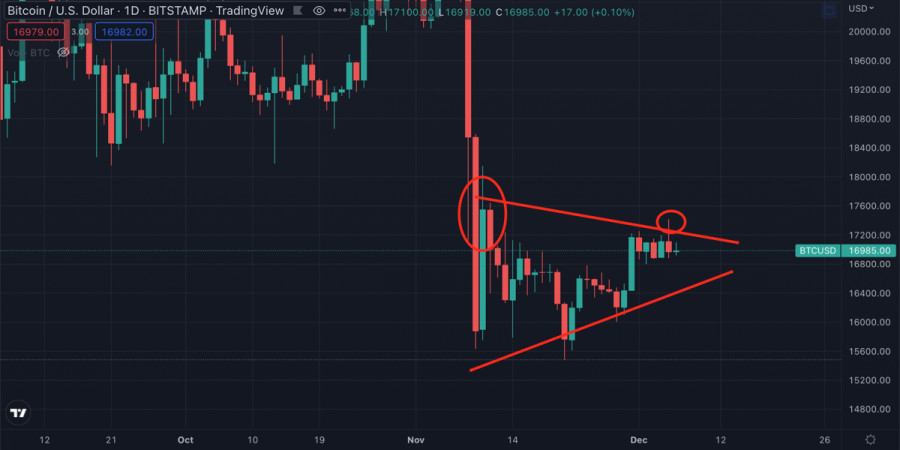 On the four-hour chart, we can see that the bearish potential has declined and the bulls have stumbled into a strong support zone. As a result, a doji is forming on the daily chart as of 17:00. Technical metrics also point to the equality of the parties.

A similar situation can be seen on the daily chart, which indicates the likelihood of further price declines by momentum. Bulls should stay in the area of $16,900-$17,000, where the Fibo level of 0.236 passes. In case they successfully defend this level, we should expect BTC to rise above the level of $17,400.

In case of a negative scenario and a breakdown of $16,900, Bitcoin will retest the psychological level of $16,000. In case of additional stimulus factors, a retest or a renewal of the local bottom is quite probable.

Bitcoin is trying to implement a sluggish and shaky local uptrend. Defending the $16,900-$17,000 level will show how ready the bulls are for further growth. Local on-chain positivity is encouraging, but in order to be fully confident, the cryptocurrency needs to defend the $16,900 level and finally break out of the range, breaking $17,400.

1138
Can't speak right now?
Ask your question in the chat.