Forex Analysis & Reviews: EUR/USD. Analysis for December 8. There will be no increase in the strength of the US dollar. 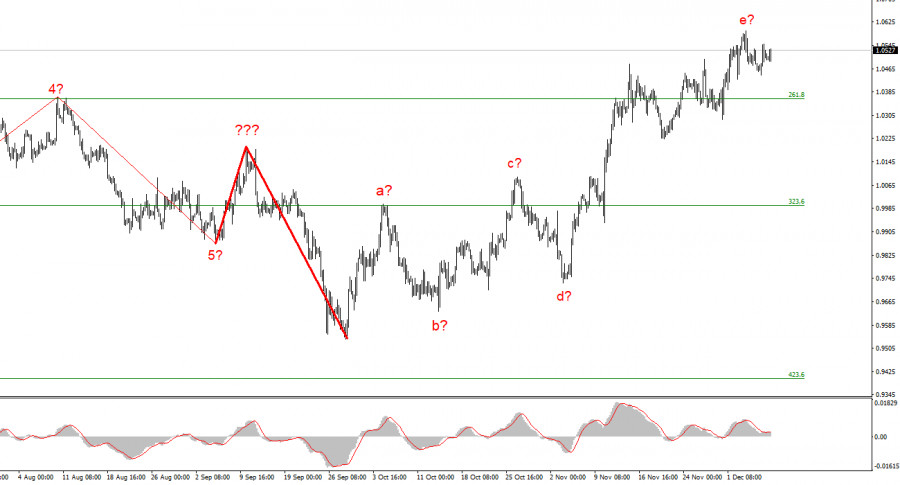 The wave marking on the euro/dollar instrument's 4-hour chart still appears to be quite accurate, but the entire upward section of the trend is becoming more convoluted. It has already assumed a clear corrective and somewhat prolonged form. Waves a-b-c-d-e have been combined into a complex correction structure, with wave e having a significantly more complex form than the other waves. Since wave e is much higher than the peak of wave C, if the wave markings are accurate, construction on this structure may be nearly finished. In this instance, it is anticipated that we will construct at least three waves downward, but if the most recent phase of the trend were corrective, the subsequent phase would probably be impulsive. Therefore, I am preparing for a new, significant decline in the instrument. The market will be ready to sell when a new attempt to breach the 1.0359 level, which corresponds to 261.8% Fibonacci, is successful. The last decline of the instrument, however, is not the first wave of a new descending section; rather, the rise in the instrument's quotes over the past few weeks suggests that the entire wave e may end up being longer. Consequently, the scenario involving the first two waves of a new downward trend segment is rejected. Because there is no increase in demand for US currency, the wave pattern starts to become muddled and complex.

This week, the euro/dollar ratio is stable.

On Thursday, the euro/dollar instrument increased by 25 basis points. The lack of a compelling news background for today explains why the instrument's amplitude of 20 points is not unexpected. There has been little significant news this week in the European Union and the United States, and I anticipate this situation will last through the end of the week. This is not good or bad for the current wave markup. Instead, there is a deadlock that needs to be broken. The instrument is not rising right now, so the wave e does not extend further and is also not falling, so a new downward section of the trend is not developing. Even weeks may pass with the instrument in this position. Based on the wave markup, as it stands right now, I'm still waiting for at least three waves to form in the trend's correction.

The National Bank of Canada's economists concur with my prediction and think a correction should start soon. They also mention that the dollar's decline might continue in 2023, and I consider such a possibility. Just so that the entire wave pattern has a respectable appearance and you can work and profit from it, you should build a correction trend before you build a new upward trend. Any part of the trend can look almost any way if there are no traditional wave structures. Then how can one profit from it? The current news environment could be more helpful. 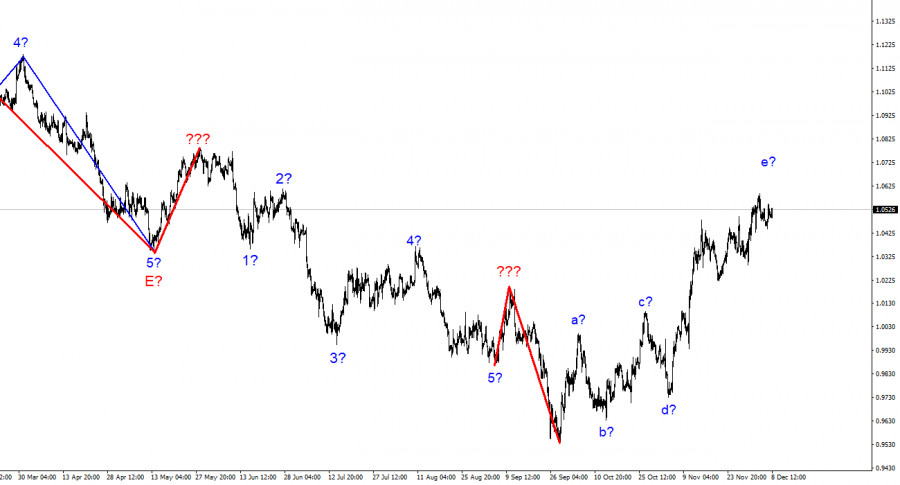 The upward trend section's construction has grown more intricate and is almost finished. As a result, I suggest making sales with targets close to the estimated 0.9994 level, or 323.6% Fibonacci. The likelihood of this scenario is increasing, and there is a chance that the upward portion of the trend will become even more extended and complicated.