The Morning Star and Evening Star patterns often appear on charts and indicate a change in the current trend. These patterns are formed by three candlesticks each. The Morning Star points to the stop in a price fall and a bullish reversal; while the evening star means the end of growth and a bearish reversal.

The Morning Star is a bullish reversal pattern consisting of three candles. Between the first large red candlestick and the second small-bodied candle (star), there is a gap. The third large white body moves inside the body of the first candlestick. The ideal Morning Star has a gap before and after the second body.

The Evening Star is a bearish equivalent of the Morning Star and it appears during an uptrend or after it. Day 1 is a large white candlestick followed by a star. The body of a star is gapped from the previous day’s body. The first sign of indecision in the market is the small-bodied star formation. The next day, there is a gap down and the pattern is completed with even lower close price. Just like the Morning Star, the Evening Star should have a gap between the first and second bodies and a gap between the second and third bodies.

During a downtrend in the market, a long red candlestick is formed confirming the trend continuation. At the session’s opening the next day, there is a price gap down, trading is carried out in a narrow range, and the session ends close to the opening price. The next day, trading starts with a gap up and the session is closed at a higher price. An important trend reversal appears. The Evening Star pattern development is the opposite of the Morning Star scenario.

The Morning Star pattern could develop into the Hammer or the Paper Umbrella, thus confirming the bullish sentiment of the pattern. The Evening Star pattern could develop into the Shooting Star that is viewed as a bearish candlestick and proves the bearish sentiment of the pattern. The following patterns are close to the Morning Star and the Evening Star: Abandoned Baby, Morning Doji Star, Evening Doji Star, and Three Stars. 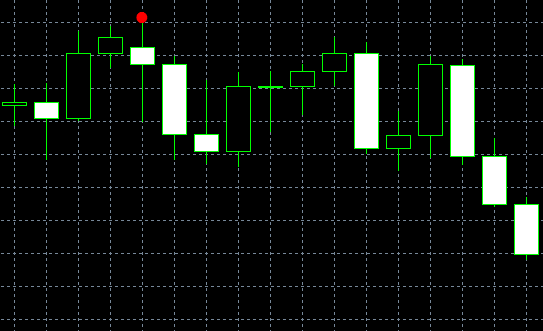