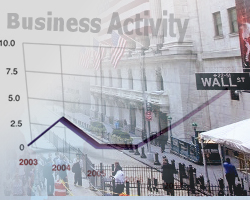 The Philly Fed said its index for current general activity climbed to 25.7 in July from 19.9 in June, with a positive reading indicating growth in regional manufacturing activity. Economists had expected the index to inch up to 22.0.

The bigger than expected increase by the headline index was primarily due to a significant acceleration in the pace of growth in new orders, as the new orders index jumped to 31.4 in July from 17.9 in June.

At the same time, the report said the shipments index fell to 24.7 in July from 28.7 in June, indicating a slowdown in the pace of shipment growth.

The pace of job growth in the Philadelphia-area manufacturing sector also saw a notable slowdown, with the number of employees index slumping to 16.8 in July from 30.4 in June.

The Philly Fed also said expectations for the next six months continued to moderate but remain positive overall, as the diffusion index for future general activity dipped to 29.0 in July from 34.8 in June.

A separate report released by the New York Fed on Monday showed regional manufacturing activity continued to grow at a fairly brisk pace in July, although the pace of growth slowed from the previous month.

The New York Fed said its general business conditions index dipped to 22.6 in July from 25.0 in June, while economists had expected the index to drop to 22.0.