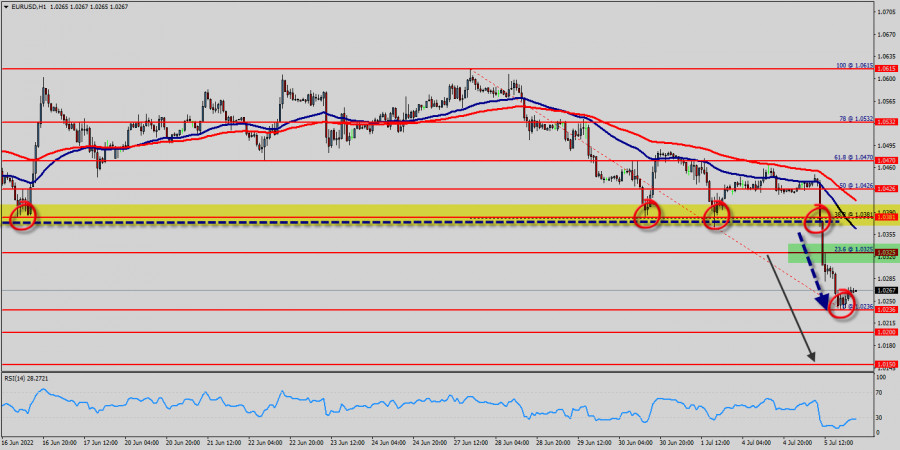 The EUR/USD pair traded in one direction in the range of 1.0426 to 1.0236 and closed the day out some significant changes that's lies in downtrend. The market was also trading in a downtrend range of 1.0325 - 1.0200, staying close to yesterday's closing price.

On the hourly chart, EUR/USD is still trading below the moving average MA (2100) H1 (1.0325). The situation is similar on the four-hour chart. Based on the foregoing, it is probably worth sticking to the south direction in trading, and while the EUR/USD pair remains below MA 100 H1, it may be necessary to look for entry points to sell for the formation of a correction.

The EUR/USD pair's down trend finally resumes and intraday bias is back on the downside. Next target is 1.0236 long term projection level. On the upside, above 1.0325 minor resistance will delay the bearish case and turn intraday bias neutral again.

Market analysis > Fundamental analysis : The euro depreciated below 1.0426 (support became a resistance), its lowest level since 20 years as weak economic data and rising gas prices strengthened the prospect of a widening monetary policy gap between the ECB and the US Federal Reserve. An energy crisis in Europe has clouded even further the outlook for growth in the Eurozone, making the ECB's task of taming record levels of inflation more difficult.

Market analysis > Sentiment analysis : psychological level set at the price of 1.0426 which represents a major resistance today. Probably, the main scenario is the continued decline from the level of 1.0426 to 1.0200. Alternative scenario is consolidation above MA 100 H1, followed by a rise to1.0470 (last high).

Today, the first support level is seen at 1.0200, and the price is moving in a bearish channel now. Furthermore, the price has been set below the strong resistance at the level of 1.0381, which coincides with the 38.2% Fibonacci retracement level.

This resistance has been rejected several times confirming the downtrend. Additionally, the RSI starts signaling a downward trend. As a result, if the EUR/USD pair is able to break out the first support at 1.0200, the market will decline further to 1.0150 in order to test the weekly support 2.

The EUR/USD pair will probably go down because the downtrend is still strong. Consequently, the market is likely to show signs of a bearish trend.