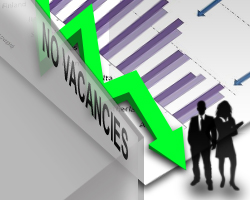 A report released by payroll processor ADP on Wednesday showed private sector employment in the U.S. increased by slightly more than expected in the month of November.

ADP said private sector employment shot up by 534,000 jobs in November after surging by a revised 570,000 jobs in October.

Economists had expected private sector employment to jump by about 525,000 jobs compared to the addition of 571,000 jobs originally reported for the previous month.

"Service providers, which are more vulnerable to the pandemic, have dominated job gains this year," she added. "It's too early to tell if the Omicron variant could potentially slow the jobs recovery in coming months."

The report showed employment in the service-providing sector spiked by 424,000 jobs in November, reflecting notable job growth in leisure and hospitality and professional/businesses services industries.

"That said, we do expect payroll growth to ease back soon as, regardless of what happens with the Omicron coronavirus variant, rising Delta infection rates in the Northeast and Midwest begin to weigh on demand a little," Ashworth added.

On Friday, the Labor Department is scheduled to release its more closely watched monthly employment report, which includes both public and private sector jobs.