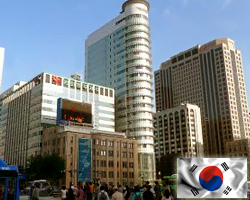 South Korea's gross domestic product expanded a seasonally adjusted 0.3 percent on quarter in the third quarter of 2021, the Bank of Korea said in Thursday's preliminary report.

That was in line with expectations and down from the 0.8 percent growth in the previous three months.

On an annualized yearly basis, GDP jumped 4.0 percent - again roughly matching estimates and slowing from 6.0 percent in the second quarter.

Real gross national income (GNI) decreased by 0.7 percent on quarter in the third quarter but gained 2.8 percent on year.

On the production side, manufacturing was consistent with the previous quarter, as machinery and equipment increased while transportation equipment decreased. Construction declined by 2.4 percent, owing to a decrease in civil engineering. Services grew by 0.5 percent, with increases in finance and insurance and human health and social work.

On the expenditure side, private consumption contracted by 0.2 percent, as expenditures on non-durable goods increased but services decreased. Government consumption rose by 1.3 percent, mainly due to increased expenditures on goods. Construction investment contracted by 3.5 percent, as civil engineering decreased. Facilities investment fell by 2.4 percent, driven by a decrease in transportation equipment. Exports went up by 1.8 percent, due to increases in coal & petroleum products and machinery & equipment. Imports fell by 0.7 percent, owing to decreased imports of transport equipment.

Also on Thursday, Statistics Korea said that consumer prices in South Korea climbed 3.7 percent on year in November. That surpassed expectations for 3.1 percent and was up from 3.2 percent in October.

On a monthly basis, inflation rose 0.4 percent versus forecasts for a decline of 0.2 percent and up from 0.1 percent in the previous month.