23.06.202213:05 Forex Analysis & Reviews: EUR/USD: plan for the US session on June 23 (analysis of morning deals). The euro collapsed after the data on activity in the eurozone

In my morning forecast, I paid attention to the 1.0512 level and recommended making decisions on entering the market. Let's look at the 5-minute chart and figure out what happened there. In the first half of the day, very weak data on activity in the eurozone came out, which indicated an almost complete suspension of its growth. All this led to the fall of the euro and the breakdown of the 1.0555 support. However, it did not come to the reverse test from the bottom up, so it was not possible to enter short positions. The breakout and consolidation below 1.0512 gave a good sell signal, which led to the euro moving down another 30 points, but that was the end of it. In the afternoon, the technical picture completely changed. And what were the entry points for the pound? 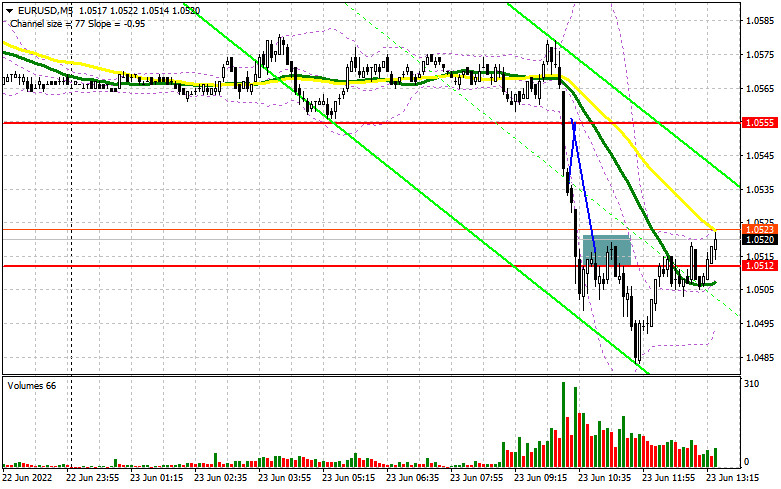 There will be little envy today from what Federal Reserve Chairman Jerome Powell has to say. Most likely, he will repeat exactly what he said yesterday, and, as we remember from the morning review, the head of the Fed did not say anything new. Any of his boilerplate comments about high inflation have already been taken into account in dollar quotes. If Powell repeats everything he said yesterday in Congress today, the euro may cheer up after a sharp drop due to bad statistics. In the afternoon, similar data on activity in the United States are expected. The situation there will certainly be much better, which may lead to a repeated decline of EUR/USD to the area of daily lows, to a new support of 1.0486. The formation of a false breakdown there forms a signal to open long positions to return and update 1.0546, where the moving averages are playing on the side of the bears. A breakout and a top-down test of this range will hit sellers' stop orders, which will give a signal to enter long positions with the possibility of building a larger uptrend and updating the maximum of 1.0603, where I recommend fixing the profits. If EUR/USD declines and there are no buyers at 1.0486, the pressure on the euro will increase. This will lead to new problems for buyers. In this case, I advise you not to rush into the market: the best option for opening long positions will be a false breakdown in the support area of 1.0438. I advise buying EUR/USD immediately for a rebound only from the level of 1.0388, or even lower – around 1.0321 with the aim of an upward correction of 30-35 points within a day.

Sellers showed themselves after weak statistics and now hope for another update of local lows. If the indicators for the composite index of business activity PMI from Markit in the United States exceed the forecasts of economists, the pressure on the euro will return. In the case of an upward correction of EUR/USD after the reports, only the formation of a false breakdown in the area of 1.0546, where the moving averages are, will give a signal to open short positions with the prospect of returning to the new support of 1.0486 formed at the end of the first half of the day. A lot depends on this level: if the bulls manage to hold it, there you can safely draw the lower boundary of the new ascending channel, which opens up good prospects for further growth of the euro. A breakdown and consolidation below this range, together with strong US data and unconventional statements by Citizen Powell, as well as a reverse test from the bottom up of 1.0486 will lead to an additional sell signal with the demolition of buyers' stop orders and a larger movement of the pair down to the 1.0438 area. A breakthrough and consolidation below 1.0438 is a direct road to 1.0388, where I recommend completely exiting sales. In case of an upward movement of EUR/USD during the American session, as well as the absence of bears at 1.0546, I advise you to postpone short positions to the more attractive level of 1.0603. In the formation of a false breakdown, there will be a new starting point for the downward correction of the pair. You can sell EUR/USD immediately on a rebound from the maximum of 1.0640, or even higher – around 1.0663 with the aim of a downward correction of 30-35 points. 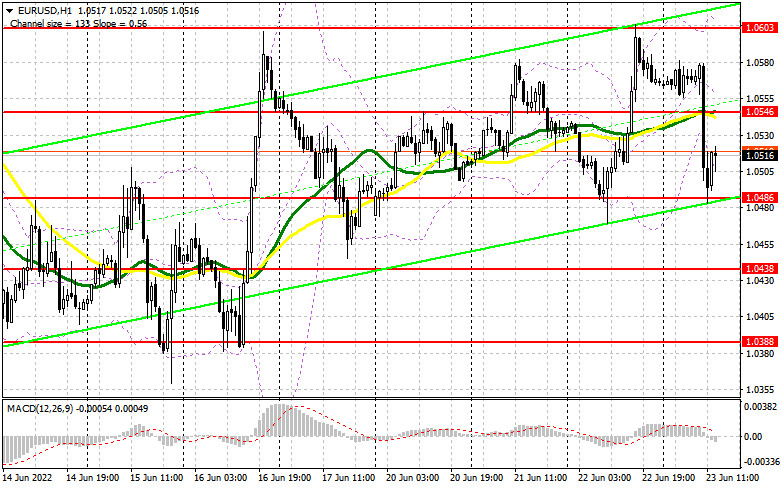 The COT report (Commitment of Traders) for June 14 recorded a sharp reduction in long positions and an increase in short positions, which led to the formation of a negative delta, indicating the formation of bearish sentiment. The meeting of the European Central Bank was in the past, and all the emphasis was on the decision of the Federal Reserve System, which raised interest rates immediately by 0.75%, declaring the continuation of a tough fight against inflation in the United States. The fact that politicians continue to pursue a tight monetary policy forces traders to get rid of risky assets and buy the dollar, which leads to its strengthening. Most likely, this trend will continue, since no one is going to abandon measures to combat inflation through an increase in interest rates yet. The COT report indicates that long non-commercial positions decreased by 23,262, to the level of 206,986, while short non-commercial positions jumped by 33,299, to the level of 213,004. Despite the low exchange rate of the euro, this does not make it particularly attractive, since traders choose the US dollar. At the end of the week, the total non-commercial net position turned negative and decreased from 50,543 to -6,018. The weekly closing price dropped to 1.0481 against 1.0710.