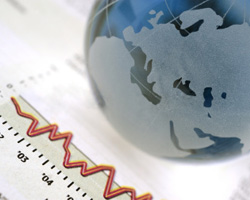 The interest rate announcement from the European Central Bank is due on Thursday, headlining a hectic day for the European economic news.

The ECB is expected to leave its key interest rate, which is the rate on the main refinancing operations, at a record low zero percent.

ECB President Christine Lagarde is set to hold a press conference at 8.30 am ET. After unveiling a new EUR 750 billion Pandemic Emergency Purchase Programme in March to combat the risks posed by coronavirus, the bank is not expected to introduce additional measures today.

At 1.30 am ET, France's Insee releases GDP data for the first quarter. The economy is forecast to contract 3.5 percent sequentially after falling 0.1 percent in the fourth quarter.

At 2.00 am ET, Destatis is set to publish Germany's retail sales and labor force survey results. Retail sales are forecast to grow 1.5 percent on year in March, slower than February's 6.4 percent increase.

At 2.45 am ET, flash consumer prices and household consumption from France are due. EU harmonized inflation is expected to ease to 0.2 percent in April from 0.8 percent in March.

At 3.00 am ET, Spain's INE releases flash consumer prices and GDP data. The economy is forecast to shrink 4.4 percent on quarter, reversing a 0.4 percent rise in the preceding period.

In the meantime, flash GDP data is due from Austria. Economists expect GDP to contract 2.5 percent sequentially in the first quarter, in contrast to an increase of 0.3 percent a quarter ago.

Also, Hungary's gross wages and foreign trade figures are due.

At 3.55 am ET, Germany's Federal Employment Agency is scheduled to issue unemployment data. The jobless rate is forecast to rise to 5.2 percent in April from 5 percent in March.

At 4.00 am ET, unemployment from Italy and consumer prices from Poland are due. Italy's jobless rate is seen at 10.5 percent in March versus 9.7 percent in February.

At 5.00 am ET, quarterly national accounts, flash inflation and unemployment figures are due from Eurozone. The currency bloc is forecast to shrink 3.2 percent sequentially in the first quarter after rising 0.1 percent in the fourth quarter of 2019.

Eurozone flash inflation is expected to ease to 0.1 percent in April from 0.7 percent in March.

At 6.00 am ET, Italy's Istat is slated to release preliminary GDP data. GDP is forecast fall sharply by 5 percent on quarter after falling 0.3 percent in the preceding quarter.