GBP/USD. August 18th. Results of the week. The long-awaited correction for the pound 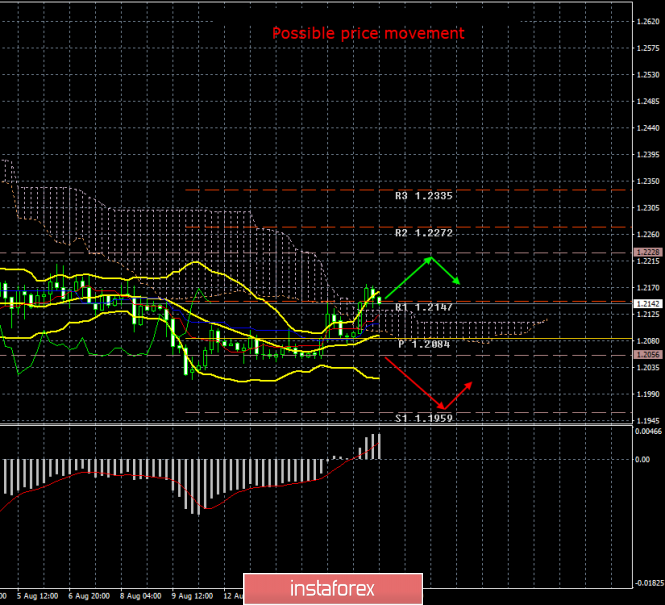 The strengthening of the British pound at the end of the week is like a gift for the new year. Given the macroeconomic reports received from the UK this week, there could be an impression that the pound sterling's growth is justified. However, from our point of view, there is no connection between reports from the United Kingdom and the British currency's meager growth. The first point in favor of this assumption is the need for a technical correction. Not a single currency can fall or grow constantly, from time to time, traders will take profits, and the pair will retreat against the trend. The second point - inflation in the UK accelerated to 2.1%, retail sales exceeded forecasts, salaries also showed positive dynamics, but the main reason is the fall of the pound in recent weeks, months and years. Since the pound depreciates, this leads to an increase in inflation (the United Kingdom, unlike the United States and the European Union, boasts stable inflation of 2.0%), a forced increase in wages (the so-called inflationary growth), and the growth in retail sales was associated with... Great fears among the British over a "hard" Brexit and life after it. In recent weeks, UK citizens have simply stocked up on food and medicine in case the disordered Brexit does happen, which led to an increase in retail sales. It turns out that all three positive reports from the UK are not so positive. And if you recall that the unemployment report showed an increase from 3.8% to 3.9%, then the fundamental background is already shifting to the "negative" side.

Meanwhile, a secret document was released called Yellowhammer, which said that the UK could face serious disruptions in the supply of food, medicine, fuel and their shortages in the case of a hard Brexit. The fears of the authors of this document are connected with the work of ports and customs under the new rules. There are also serious concerns about the riots on the island of Ireland, as in the case of a hard Brexit, a border will appear between Ireland and Northern Ireland, which does not suit very many residents of the island.

Well, the British Parliament has its "own series". According to recent reports, the Labour Party can unite as Conservatives to oppose Boris Johnson and his initiative to leave the EU quickly and no matter how. With the Conservatives, who themselves elected Johnson to the post of their leader and prime minister a month ago. With Conservatives who knew very well that Johnson's main election promise was to implement Brexit by October 31st. Now, Corbyn and a company of other MPs want to remove Johnson from work in order to protect the country from economic disaster. Well, the pound, although it has grown from multi-year lows by as much as 150 points, does not look like a currency that is ready to start an upward trend.

The GBP/USD currency pair continues its upward correction. Thus, formally, it is now recommended to buy the GBP/USD pair with targets at 1.2228 and 1.2272, however, transaction volumes should be minimal. We believe that there are no fundamental factors for the solid strengthening of the pound, and traders will remain absolutely pessimistic over the British pound until October 31.

Red line and bar graph with white bars in the indicator window.