A summary of Friday's economic data on the US – they came out worse than forecasts and gave optimism to counter-dollar currencies, at the same time, the pound grew by 54 points. The number of new housing starts in the US in July fell from 1.24 million (revised from 1.25 million) to 1.19 million while consumer confidence fell from 98.4 to 92.1. As a result, the pound worked out the upper target of 1.2154, set by the Fibonacci level of 238.2% and this morning is being mastered (that is, does not fall) in the range of 6-7 August. 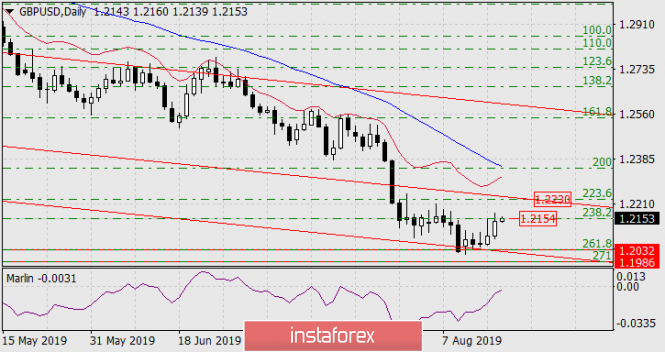 The signal line of the Marlin oscillator on the daily chart is approaching the boundary with the growth territory, there is a possibility of a reversal down from this line, but in this case the price can still overcome the top of the previous day. In the event of aggressive price growth, it is possible to achieve a Fibonacci level of 223.6% at 1.2230 without denying the reversal scenario - the Marlin oscillator will not have time to critically respond to the rapid price change. There is also a price channel line in the area of 1.2230, which creates a magnetic point with the Fibonacci level. 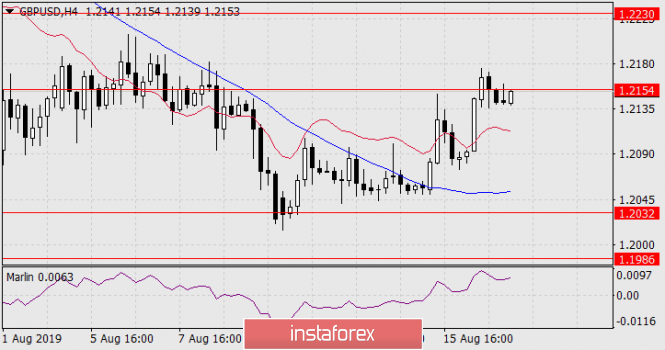 On a four-hour chart, the price has consolidated above the lines of balance and MACD, the Marlin oscillator in the growth zone. The growth probability has increased, but this is a correction, we are waiting for its completion. At the same time, a symposium of bankers in Jackson Hole will begin on Thursday and Fed Chairman Jerome Powell is set to speak on Friday. Therefore, the pound can wander freely until the end of the week.