Powell, like a wizard, can do almost anything (We sell or buy EUR/USD and AUD/USD pairs, based on the content of Powell's speech)

Investors look forward to the second day of the traditional economic symposium organized by the Federal Reserve. Today, the main event, a speech by Fed Chairman J. Powell,for the markets will happen.

It will not be a secret that all the attention of market players will be paid to that part of Powell's speech, which as expected, concerning the prospects for the monetary policy of the regulator. A clear signal is expected from him or at least raising the topic of the need to continue lowering interest rates in the wake of a clear expansion of the problem of the trade crisis between Washington and Beijing (since a lot of interesting things happened after the last meeting of the Central Bank).

Firstly, this is a sharp devaluation of the Chinese yuan, which is already being paired with the dollar near 7.10 yuan per dollar. The Chinese did this in response to Donald Trump's new decisions to increase customs duties against the background of the "intransigence" of the Chinese side. Secondly, the latest economic statistics, particularly consumer sentiment indices from the University of Michigan, indicate a strong decline in these sentiments, which, if maintained, will threaten a drop in population demand. This means that it will hit the American economy. Thirdly, Trump unexpectedly said at the beginning of this week that he could go to reduce the tax burden to stimulate economic growth in the country.

These are the three main points that the Fed will have to explain to Powell. If he makes it clear by the content of his comment that the cycle and this is what the conversation is about now. The lower interest rates will continue with their cuts following the September meeting. This will undoubtedly cause an optimism surge in global markets at least in the short term. We expect an increase in demand for risky assets. Stock prices of companies will creep up; they can also receive a local incentive for growth and quotations of assets of the commodity market. But the US dollar exchange rate may come under pressure, although it will be too early to talk about a sharp change in the trend, just as the ECB and a number of other major world central banks will urgently lower interest rates, which will offset the weakening dollar.

Of course, another option is possible. Powell will not report anything significant but in fact, announcing that the Federal Reserve will continue to monitor the situation. In this case, we should expect a reverse development of events to what is described above. But nevertheless, we are more inclined toward the first version of the development of the situation.

The EUR/USD is trading below the range of 1.1070-1.1110 in anticipation of the performance of Jerome Powell in Jackson Hole. She may continue to fall if the head of the Fed does not signal the continuation of lowering the Central Bank rates. In this case, the pair may fall to 1.1025. However, if the opposite happens, then we expect the pair to grow to 1.1150-55.

The AUD/USD pair will react similarly to Powell's performance. A signal of continued reduction in rates will lead to an increase in the pair to 0.6850. Its absence will first cause a fall in value to 0.6720, and then to 0.6680. 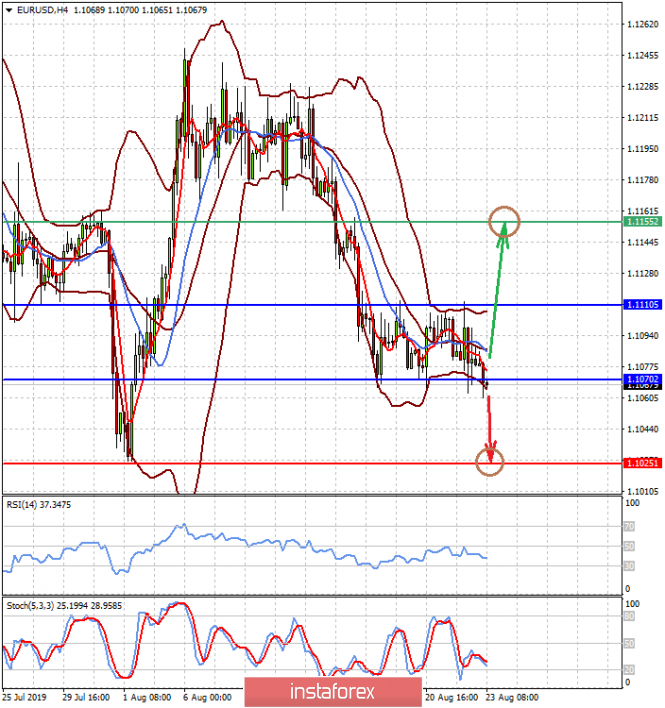 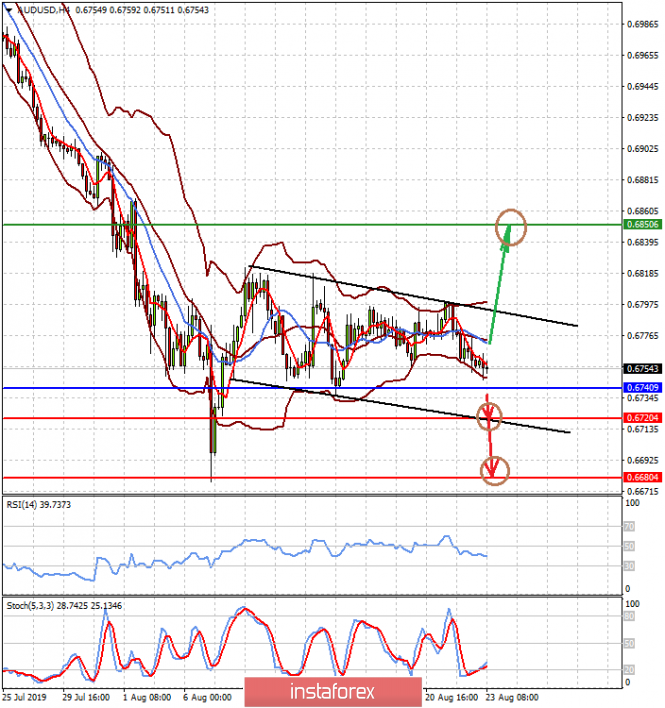