فاریکس تجزیہ اور جائزے: "Hard-working" dollar: strengthening on the euro downturn and in anticipation of positive data on employment in the US

The US currency is in tension before the release of the US labor market report, despite the advantage over the European one. At the same time, EUR does not leave attempts to rise and catch up.

Currently, the downward trend prevails on the markets, plunging the American and European currencies into pessimism. According to economists at Commerzbank, a long-term strengthening of the US labor market provides significant support to the greenback. Experts put an equal sign between a strong labor market and a growing dollar.

According to preliminary estimates, the positive trend in the USD will continue as long as the Federal Reserve adheres to a tight monetary policy. This situation is favorable for the US currency, but undermines the position of the European one. The EUR/USD pair was trading at 1.0012 on the morning of Thursday, September 1, trying to get out of the current range. At the same time, analysts pay attention to the high probability of the pair moving towards parity. 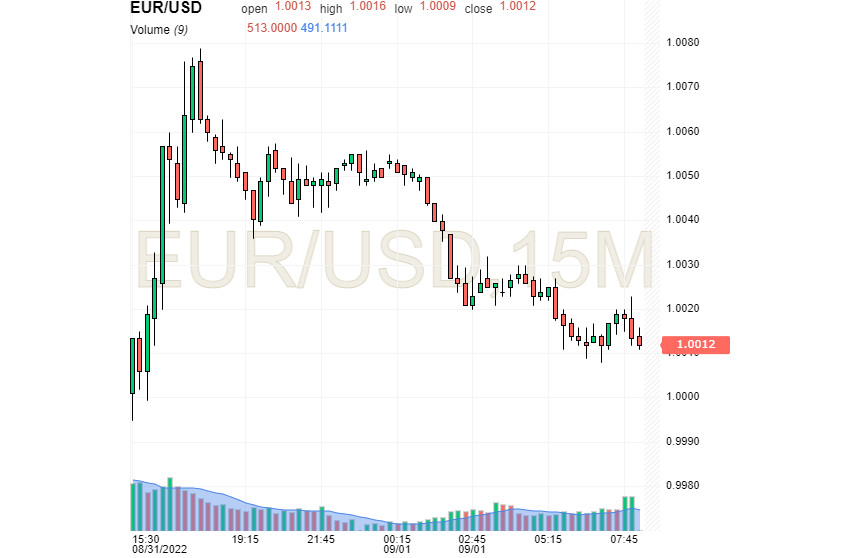 The greenback plunged a bit on Wednesday evening, August 31, after the release of macro statistics on the US labor market, but later won back short-term losses. U.S. private-sector jobs increased by 132,000 last month, according to Automatic Data Processing (ADP), an analyst firm. Initial jobless claims in the U.S. surged to 248,000 on Friday, according to preliminary forecasts. Data on unemployment in the country will be released on September 2. Experts expect this indicator to remain at the level of July (3.5%) and to increase the number of jobs in the non-agricultural sector of the country.

Many currency strategists rely on strong US employment data and falling unemployment. They consider these indicators the most important for the Fed and its future monetary policy. However, some experts argue that the key indicator for the central bank is the level of salaries. Recall that Fed Chairman Jerome Powell and other members of the FOMC are counting on the "cooling" of the national labor market. Representatives of the Fed are trying to avoid a situation in which wage growth provokes another round of inflation. In such a situation, the increase in the number of vacancies recorded in August is a negative signal for the central bank.

Against this background, the European currency seeks to maintain balance and get out of the price hole. However, its efforts are rewarded with rare bursts of recovery, and then a decline. Adding fuel to the fire is uncertainty about the European Central Bank's next steps on the rate. According to Nordea economists, next week the central bank will raise the rate by 75 basis points. The bank believes that even negative forecasts for economic growth in the region will not interfere with this.

At present, the inflation rate in the eurozone remains stably high. According to current reports, inflation in EU countries reached an impressive 9.1% in August. Previously, this figure was 8.9%. The current situation undermines the euro's position, which is hardly kept afloat.

According to analysts, the weakening of the euro against the dollar is due to the active tightening of monetary policy by the Fed. At the same time, the current parity between currencies may disappear when a compromise is reached in the EU on tightening the monetary policy or when inflation in the United States returns to the target of 2%. However, both situations are unlikely, experts say. According to experts, the 1:1 ratio between the dollar and the euro will remain until the EU countries begin to tighten monetary policy following the example of the United States. However, there are many pitfalls here, as the ECB needs to find a compromise between all the countries of the euro bloc.

Many experts believe that by the end of 2022 the balance of power in the EUR/USD pair will change, due to which the topic of parity will be removed. Experts allow changes in the ECB's actions regarding monetary policy. The same is possible with regard to the Fed, which is worried about labor market problems and galloping inflation. According to analysts, the pair will tend to the usual ratio of 1.0500-1.1000. "In the event of a sharp turnaround, the EU economy will receive a solid bonus for the growth of exports and the economy at the expense of the US and China," the experts emphasize.

Market participants are concerned about the questions: will the Fed take a decisive approach to monetary policy? Will the ECB follow suit? Many traders and investors are skeptical about the immediate prospects for the dollar and the euro. At the same time, analysts expect a reduction in key rates in the second half of 2023. The implementation of such a scenario will weaken the greenback and limit the potential for its strengthening.

In the current situation, some experts believe that the markets are wishful thinking, expecting less rigidity from the Fed in the process of forming monetary policy. In this matter, much depends on the level of unemployment in the country. Excessive strengthening of the labor market in the US is pushing the central bank to tighten monetary policy as soon as possible.

Fed officials are stepping up the pace of this tightening, emphasizing that they are ready to temporarily sacrifice the economy for the sake of curbing inflation. However, a few months ago they said they would try to avoid a recession. However, despite the economic upheavals, the US currency remains strong and remains competitive in the global market.