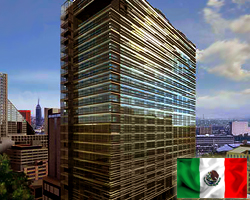 Industrial output in Mexico fell 3.7% in March from a year before, reversing the trend seen in the previous month, when the output increased 0.7%, according to the country's statistics office (Inegi).

On a monthly and seasonally adjusted comparison, the Mexican industrial output remained stable in March. In February, the production grew 0.4%. The mining sector output, which includes production from the oil sector, decreased 7.5% in March from a year before and fell 1.5% compared to February.

The construction sector output was down 3.9% on an annual basis and fell 0.7% on a monthly comparison, while the energy, water and gas production fell 4.4% in March from a year before and dropped 4.3% from February.

The manufacturing sector output was 2.4% lower in March from the same month in the previous year and rose 2.1% from February.