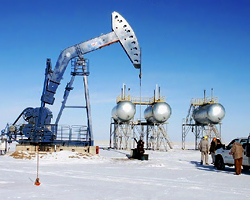 Oil prices rose over 1 percent on Monday after a drone attack claimed by Yemen's Houthi rebels sparked a fire in a remote Saudi oil and gas field.

The Saudi Aramco oil facility at Shaybah was attacked by drone on Saturday, adding to tensions in the Middle East. It resulted in a fire but there was no disruption to oil production or transportation.

Investors were also reacting to some positive signs on Sino-U.S. trade talks after U.S. President Donald Trump said that he had discussed the impact of Washington's tariffs on Chinese goods with Apple chief Tim Cook.

Separately, White House economic adviser Larry Kudlow said on Fox News Sunday that if teleconferences between both sides' deputies pan out in the next 10 days, the U.S. and China can have a substantive renewal of negotiations.

Amid concerns about a slowing global economy, market participants keep a close eye on key manufacturing data due later this week from Europe and the United States as well as Federal Reserve Chairman Jerome Powell's speech at the annual Jackson Hole Symposium for further direction.