OPEC + will not allow prices to fall

Oil prices remain volatile before the most important event, the meeting of OPEC +, which will decide the future fate of the agreement on the limitation of production.

On Thursday, June 21, the meeting of the ministerial committee of OPEC + will take place. On Friday, the meeting itself will be held, and on its outcome for the first time in quite a long time, the market has absolutely opposite opinions.

Some market participants expect that the meeting will announce a gradual increase in production volumes, as the balance is actually reached, and further restrictions may lead to the countries-participants of the agreement losing part of the market, as independent producers, primarily the US, are actively building up their own extraction. In favor of a gradual increase in production to 1.5 million barrels. a day for the next few months is Russia and Saudi Arabia. At the same time, Iran, Iraq, and Venezuela hold the opposite position. In their view, the current price level is still insufficient to stabilize the market, and therefore they can use the right of veto to block the project to increase production.

Indeed, how much does the current price level satisfy the majority of market participants? Buyers have already begun to sound the alarm, further price increases are not in their interest. At the same time, manufacturers can adhere to the opposite opinion, and here, first of all, it is important to understand the position of US power companies.

From the historical point of view, the current level cannot be called high. Oil prices twice beat records, in 2008 and in 2014, both of these peaks can be seen on the figures if we compare the overall level of inflation and the rise in prices for gasoline, which, as is known, has a very high correlation with oil prices. As can be clearly seen in the graph below, both "blowing" of oil bubbles in 2009 and 2016 only returned oil prices to a reasonable level. At the moment, the beginning of the third bubble is noticeable, but it is still at the very beginning of formation, and hence current prices cannot be considered high. 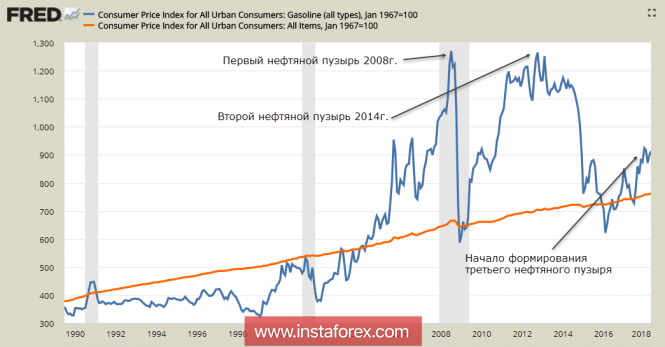 Oil companies can not consider the current level of prices high, especially given the growth of inflation, their incomes are still too low.

The analytical department of the Federal Reserve Bank of Kansas conducted a fairly extensive study on the terms of financing of oil companies depending on the price of oil. In their opinion, low prices can partly stimulate the development of the US economy as a whole, but for the oil industry, they can be devastating, as they worsen credit conditions. Credit spreads on the syndicated loan market are directly related to the level of oil prices and the capitalization of oil companies.

These fears can also be assessed on the other hand. The growth of two oil bubbles was accompanied by the growth of two other indicators - the inflow of investments and the growth of employment in the industry, this dependence is clearly visible in the graph below. At the same time, the current price increase, although it led to an increase in investment, is still not enough to make the oil industry feel confident - investments are significantly lower than in 2014, and employment is practically not growing, indicating a weak basis for the current production in the United States. 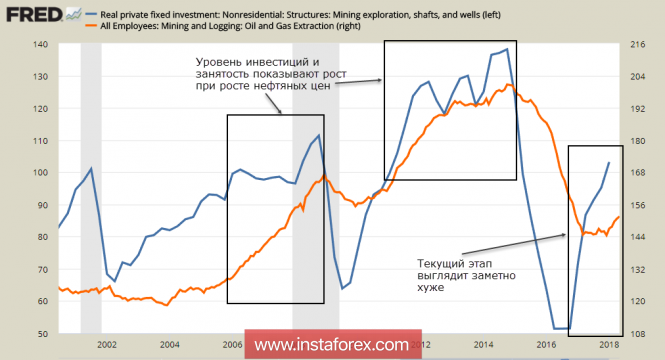 Thus, the current level of prices is still not high enough not only from the point of view of most OPEC + countries but also from the positions of their main competitors - the US energy sector. On this issue, an unexpected unity is revealed, the United States is financially interested in continuing the restriction of production, and not because they want to seize a part of the market. The reason is different, the growth in rates and the current level of prices threaten the competitiveness of the industry.

To the similar conclusions comes the majority of large players. Even a possible compromise option is a gradual increase in production by OPEC + countries at 300-600 thousand barrels. per day - will not lead to a drop in oil prices. The corrective decline for Brent will remain within $ 70 / bbl, after the meeting, another wave of growth is possible, and in the future, several weeks quotes may go above $ 80 / bbl. 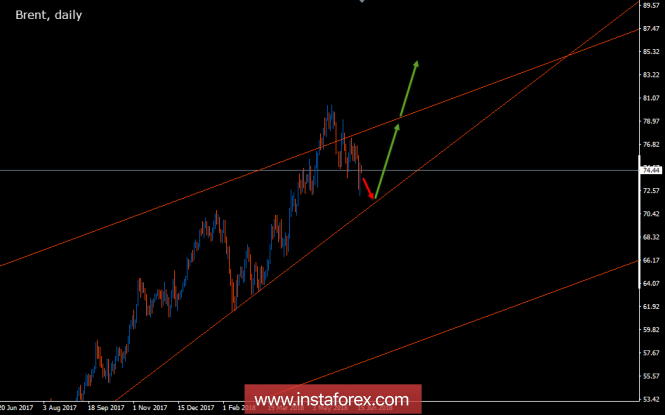