GBP/USD. May 7th. Trading system "Regression Channels". On the threshold of the second referendum 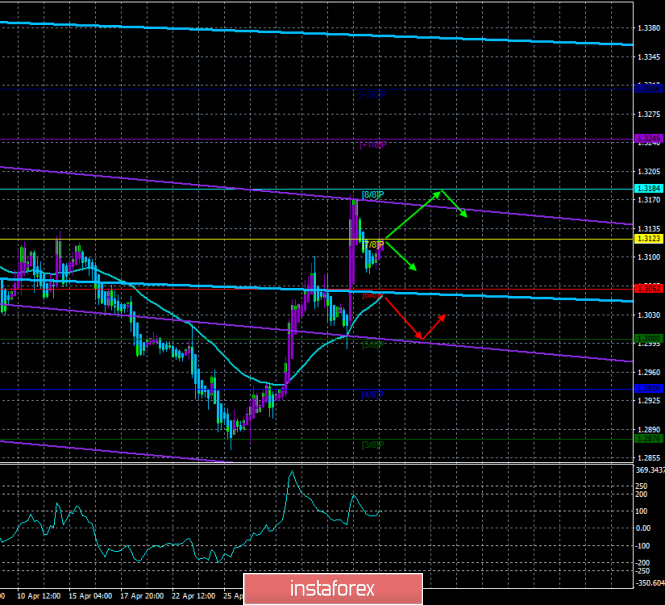 On Monday, May 6, the British pound rolled back from Friday's highs. Meanwhile, traders are discussing a possible second referendum. Recall that the probability of reaching an agreement between Labor and the Conservatives, which will provide the necessary number of votes on the next ballot for Theresa May's agreement with the EU, is not 100%. If the voting fails again or fails to reach an agreement with the Labor Party, then many deputies may demand that this issue be submitted to a popular vote. Theresa May, who is opposed to the second referendum, certainly wants to avoid such a scenario. Dissatisfaction with her actions is expressed even within her own Conservative Party. Therefore, based on all these events, we believe that the pound has no prospects for strong growth. Most likely, the pound was in demand in recent days on the basis of a possible second referendum, that is, again on expectations. But as it happened in about 100% of cases, after such growth, the expectations are invariably followed by a decrease in the pair. Of course, now everything may be different, but we still believe that the pound will resume its decline.

The pair GBP/USD has adjusted after Friday's growth but now, it is trying to resume its upward movement. Thus, it is now recommended to resume trading on the increase with the targets at 1.3184 and 1.3245 small lots. From a fundamental point of view, the resumption of the downward trend in the pair will be much more logical.

Sell positions are recommended to be considered only after the pair has been fixed below the moving with the first targets at 1.3000 and 1.2939.

The lower linear channel is the purple lines of the unidirectional movement.