Yesterday was not a very interesting trading day. Let us take a look at the 5-minute chart to find out what happened. Earlier, I asked you to pay attention to the level of 1.0549 to decide when to enter the market. Buyers of the euro managed to break 1.0549 amid the absence of macroeconomic data. However, the pair failed to consolidate and downwardly break this level. As a result, we did not receive a buy signal. The price neither reached the nearest resistance level of 1.0599. In the second part of the day, the scenario repeated. The pair was moving within a narrow sideways channel that prevented the formation of good entry points. 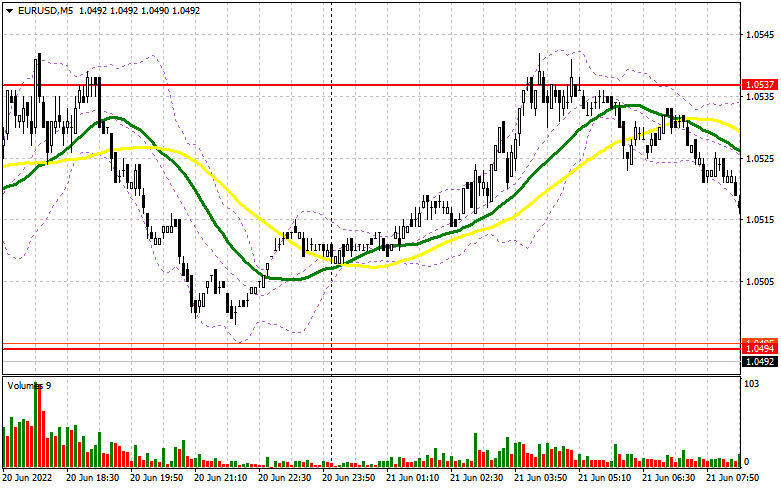 Today, in the first part of the day, the ECB will disclose its meeting minutes. However, the publication will hardly support the euro. Speeches that will be provided by ECB's De Guindos and Elderson are unlikely to boost volatility. The fact is that traders are expected to be focused on Jerome Powell's speech in Congress. He is expected to talk about the measures taken to combat inflation. He may also say that the Fed will not allow consumer prices to rise even more since the economy is showing first signs of recession. His aggressive approach may return demand for the US dollar, thus causing a sell-off in the euro and pushing it to yearly lows. If the euro continues its drop, which began during the Asian trade, bulls will have to protect the nearest level of 1.0494. Only a false break of this level will give a long signal with the target at the intermediate resistance level of 1.0537. There, we can see bearish moving averages. A break and downward test of this level may affect sellers' stop orders, thus providing traders with a long signal with the target at the high of 1.0580. The next target is located at 1.0610, where it is recommended to lock in profits. However, the pair will be able to reach this level only after Jerome Powell's testimony. If the euro/dollar pair declines and buyers fail to protect 1.0494, the pair may return to the sideways channel, thus creating new obstacles for buyers. Under these conditions, traders should exercise prudence when entering the market. It will be better to go long after a false break of the support level of 1.0447. It is also possible to buy the asset just after a rebound from 1.0388 or lower – from 1.0321, expecting a rise of 30-35 pips.

Bears have every chance to regain control over the market. The prediction will come true, if the Fed chair discloses plans for a further rise in the key interest rate. At the previous meeting, the Fed's members made some hints about another hike of 0.75% in July 2022. In this case, the euro/dollar pair may slump. If the euro rises in the first part of the day, only a false break of the intermediate resistance level of 1.0537 will give a short signal with the target at the support level of 1.0494. A break and settlement below this area as well as the ECB's report and an upward test may give an additional sell signal. In this case, the pair may slide deeper to 1.0447. However, traders should be very cautious when opening short orders. The fact is that bulls may make use of the correction and enlarge the volume of long positions ahead of Jerome Powell's speech. A break and settlement below 1.0447 will push the price to 1.0388, where it is recommended to leave the market. If the euro/dollar pair climbs during the European session and bears fail to protect 1.0537, traders should avoid selling until the price hits 1.0580. A false break of this level may launch a downward correction. It is also possible to sell the asset after a bounce off 1.0610 or higher – off 1.0640, expecting a decline of 30-35 pips. 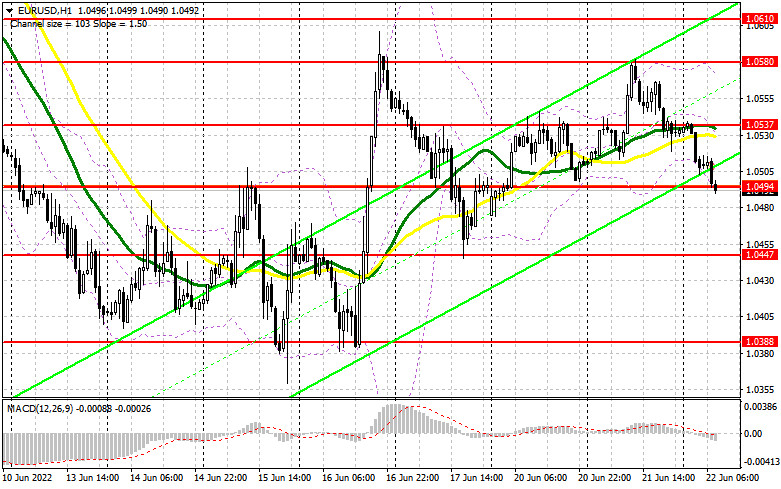 According to the COT report from June 14, the number of long positions tumbled, whereas the number of short positions increased, thus pointing to the formation of bearish sentiment. Since the ECB meeting took place long ago, traders were focused on the Fed's interest rate decision. Thus, the US regulator raised the benchmark rate by 0.75% at once, announcing its intention to continue combating the surging inflation. Since politicians stick to tight monetary policy, traders have to sell off risk assets and switch to the US dollar, thus boosting its price. The situation will hardly change, as monetary authorities will continue curbing inflation by means of higher interest rates. The COT report unveiled that the number of long non-commercial positions declined by 23,262 to 206,986, whereas the number of short non-commercial positions jumped by 33,299 to 213,004. Although the price of the euro is very low, it does not add to the attractiveness of the asset. Traders still prefer the greenback. Results of the week showed that the total non-commercial net position turned negative and decreased from 50,543 to -6,018. The weekly closing price dropped to 1.0481 against 1.0710.

Trading is performed below 30- and 50-day moving averages, which points to the fact that pressure on the euro is returning.

Note: The period and prices of moving averages are considered by the author on the one-hour chart that differs from the general definition of the classic daily moving averages on the daily chart.