Yesterday, a few interesting trading signals were made. Let's take a look at the M5 chart to get a picture of what happened. In the previous overview, the focus was on 1.0512 with entry points considered around it. During the European session, disappointing data on business activity in the eurozone came in, and the euro plunged breaking through 1.0555 support. No sell signal was made as the price failed to retest the mark from bottom to top. A strong sell signal was created when the pair broke through 1.0512 and settled below it. As a result, the euro fell by another 30 pips. During the North American session, bulls tried to break above 1.0546 but did not make it. A false breakout of the level generated a strong sell signal, and the euro plummeted by another 40 pips. 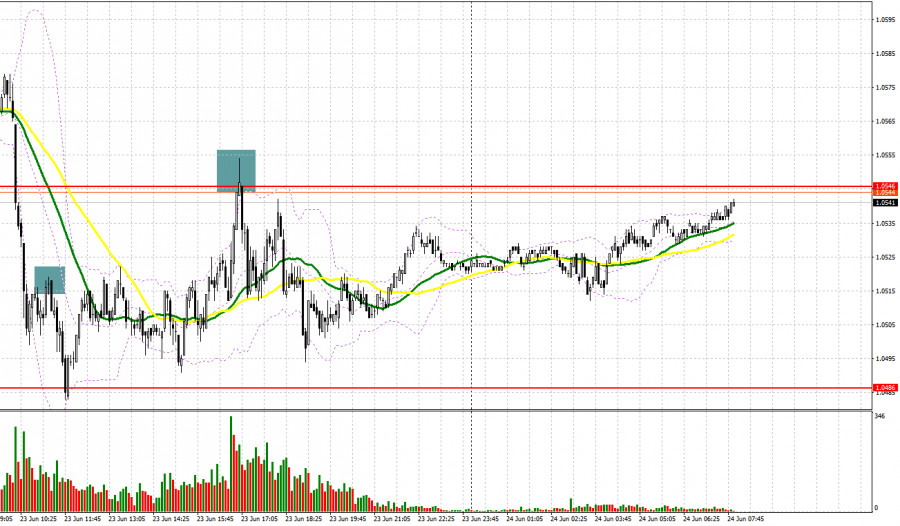 The hawkish speech of the Fed chairman in Congress had little effect on EUR/USD. By then, the pair had already consolidated within a sideways channel after the morning sell-off triggered by disappointing PMI results in the eurozone. Similar reports in the US did not cause market jitters. Today, Germany will see the release of a series of Ifo reports - business climate, current conditions, and expectations - which should boost the euro. If the pair goes down after the publication, bulls should protect 1.0486, in line with the lower limit of the sideways channel. A false breakout there could give a buy signal, with the target at 1.0549, in line with the bearish MAs. Should quotes break and test the barrier from top to bottom, a row of bearish stop offers will trigger and a buy signal will be created, with the target at 1.0603, the upper limit of the channel, and potential growth to 1.0640. A more distant target is seen around 1.0663, where profit taking should be considered. In the case of bearish EUR/USD and the lack of bullish activity at 1.0486, the pair will resume the downtrend after a correction. Therefore, long entry points could be looked for after a false breakout around 1.0438 support. Long positions on a bounce could be opened from 1.0388 or around 1.0321, allowing a 30-35 pips correction intraday.

If EUR/USD is bullish during the European session after the release of Germany's Ifo data and the speech of ECB official Elizabeth McCaul, a sell signal with the target at 1.0486 support will be made after a false breakout at 1.0549. An additional sell signal with the target at 1.0438 will be made after a breakout, consolidation, and a bottom-top retest of the barrier. In addition, a row of bullish stop orders will trigger. A test of this level will indicate that the downtrend has resumed, and the target will stand at 1.0368, where all short positions should be closed. If EUR/USD is bullish during the European session and there is a lack of bearish activity at 1.0549, it could fuel market uncertainty. In such a case, selling could be considered after a false breakout at 1.0603 only. A false breakout could pave the way for a new downward correction. Short positions on EUR/USD could be opened on a bounce from the 1.0640 high or around 1.0663, allowing a 30-35 pips downward correction. 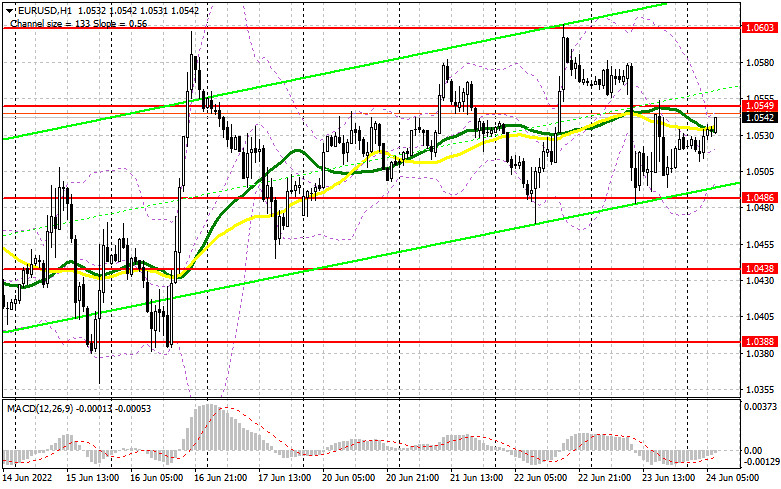 The COT report for June 17 logged a sharp fall in long positions and growth in short ones, which led to a negative delta indicating bear sentiment. The ECB meeting has long gone. The focus is on the hawkish Fed. The fact the policymakers keep fighting record inflation makes traders sell risk assets and buy the dollar, which also makes USD stronger. This trend is likely to go on as monetary tightening continues. According to the COT report, long non-commercial positions fell by 23,262 to 206 986. Short non-commercial positions jumped by 33,299 to 213,004. In spite of the low exchange rate of the euro, demand for the currency is falling. In a week, non-commercial net positions turned negative and fell to -6,018 from 50,543. The weekly closing price was down to 1.0481 versus 1.0710.

Trading is carried out in the range of the 30-day and 50-day moving averages, indicating market uncertainty.