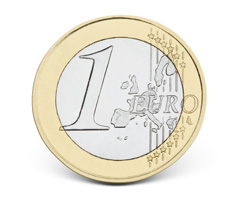 The euro was lower against its most major counterparts in the European session on Tuesday, as German economic confidence weakened to an eight-month low in July, supporting hopes for additional monetary stimulus from the European Central Bank in coming months.

Survey data from the ZEW-Leibniz Centre for European Economic Research showed that the economic confidence index declined to -24.5 in July from -21.1 in June. This was the lowest score since November 2018. The expected reading was -22.

The current conditions index fell to -1.1 in July from 7.8 in June. The expected score was 5.

Preliminary data from Eurostat showed that Eurozone's trade surplus grew in May, led by a rebound in exports, while imports decreased.

The seasonally adjusted trade surplus rose to EUR 20.2 billion from EUR 15.7 billion in April. Economists had forecast a surplus of EUR 17.5 billion.

Even though policymakers "take account of market indications," they must not be market reliant. That means the ECB should not rely "too exclusively for inflation expectations on market-based measures."

"We are data dependent and I say this in particular for the ECB: in our coming Governing Council meetings, we will assess actual economic data and we will act accordingly if and when needed," he added.

The currency was steady against its major counterparts in the Asian session, excepting the yen.

The European currency declined to near a 4-week low of 121.18 against the yen, compared to Monday's closing value of 121.49. The euro is seen finding support around the 119.00 region.

The euro fell to 1.1057 against the franc, its weakest since June 20. On the downside, 1.08 is possibly seen as the next support level for the euro.

The euro slid to 1.6697 against the kiwi for the first time since April 29. If the euro extends decline, 1.64 is possibly seen as its next support level.

Data from Statistics New Zealand showed that New Zealand consumer prices rose 0.6 percent on quarter in the second quarter of 2019.

That was in line with expectations and up from 0.1 percent in the previous three months.

In contrast, the euro advanced to more than a 6-month high of 0.9028 against the pound from yesterday's closing value of 0.8994. The euro is likely to target resistance around the 0.92 mark.

Data from the Office for National Statistics showed that the UK unemployment rate remained unchanged at 44-year low in three months to May and wages grew at the fastest pace in 11 years.

The unemployment rate remained unchanged at 3.8 percent in three months to May, in line with expectations. This was the lowest since the final quarter of 1974.

In today's events, Federal Reserve Governor Michelle Bowman will deliver remarks at a Fed Listens event in Atlanta at 8:15 am ET.

In the New York session, U.S. retail sales, industrial production and import price index - all for June, business inventories for May and NAHB housing market index for July will be out.

At 1:00 pm ET, Federal Reserve Chair Jerome Powell will give a speech titled "Aspects of Monetary Policy in the Post-Crisis Era" at the French G7 Presidency 2019 in Paris.

Federal Reserve Bank of Chicago President Charles Evans is set to speak in a television appearance on CNBC at 3:00 pm ET.