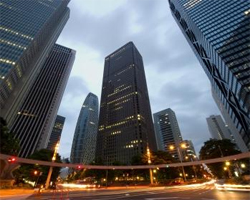 The Bank of Japan decided to leave its monetary policy unchanged on Thursday and raised the growth projections.

The board voted 7-1 to retain the interest rate at -0.1 percent on current accounts that financial institutions maintain at the central bank.

The bank will continue to purchase necessary amount of Japanese government bonds without setting an upper limit so that 10-year JGB yields will remain at around zero percent.

Compared to October outlook, the projected growth rates were somewhat higher, mainly for fiscal 2021, reflecting the effects of the government's economic measures in particular. The projected rates of increase in the CPI were more or less unchanged.

The BoJ expects consumer prices to rise 0.5 percent in the fiscal 2021 instead of 0.4 percent forecast in October. At the same time, inflation outlook for the fiscal 2022 was retained at 0.7 percent.

The bank noted that risks to both economic activity and prices were skewed to the downside, mainly due to the impact of Covid-19.