Quotes of the GBP/USD slumped to a five-month low as it came under fire on three sides. The lack of a unified position within the conservative party on the basic principles of Brexit has revived political risks, negative statistics on the U.K. continues to reduce the likelihood of tightening the monetary policy of the Bank of England in 2018, and, finally, the unrestrained growth of the yield of Treasury bonds pushes up the US dollar. Such an unfavorable background makes the position of the sterling extremely vulnerable, but Forex is good because the situation can be turned upside down in a matter of moments.

Unexpected comments by Theresa May that Britain will still come out of the Customs Union, became a verdict for the pound. A week ago, the market was walking directly opposite rumors, which at that time had some support for the "bulls" on the GBP/USD. Even for a little while. The Prime Minister said that there is no reason for a second referendum on Scotland's independence, although in the North of the United Kingdom there are quite different sentiments. In general, the divide is felt in all politics, not only in the conservative party, which plays against sterling.

The futures market is on the verge of abandoning the idea of raising the REPO rate by 25 bp in 2018. Previously, there was confidence in two acts of monetary tightening, and after the May meeting of the Bank of England, the likelihood of a hike in August were regarded as a fifty-fifty. However, the busy economic calendar for the week to May 25 a priori nominates the pound for the title of the most interesting currency of the five-day period. Bloomberg analysts expect to see April inflation and GDP for the first quarter at the same levels of +2.5% yoy and +0.1% q/q, and also forecast a slowdown in retail sales to a six-month low. At the same time, the BoE in its most recent accompanying documents noted that the second assessment of January-March, in fact, is likely to be the best. If inflation also begins to move away from the target in the direction of 3%, the idea of two acts of monetary tightening in 2018 will rise from the ashes. And if so, then the "bulls" on the GBP/USD after long ordeals will still feel the ground beneath their feet.

Dynamics of the British inflation

The reason for their optimism can be slowed down and finally, the US dollar. Despite the fact that the news of a truce in the trade war between Beijing and Washington in the form of a temporary cancellation of tariffs for $150 billion imports has benefited the yield of Treasury bonds, however, Bloomberg's median forecast of 3.19% at the end of the year is already close, and the stabilization of the indicator will somewhat curb the enthusiasm of bulls in the USD index. In addition, after a continuous 4-week rally, some of them will probably want to lock in the profit.

Technically, a clear implementation of the "Broadening Wedge" pattern brought the pair's quotes beyond the upward trading channel, and the "bears" - to the operational space, and brought them closer to the target by 88.6% in the "Double Top" pattern at arm's length. It corresponds to the level of 1.32. 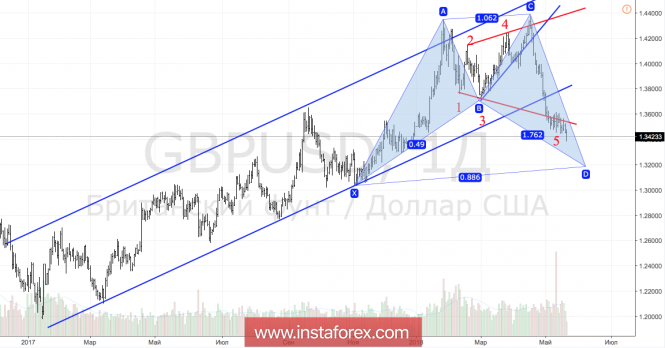