Gold will test the patience of the Fed

The reduction of geopolitical tensions around North Korea, the shadow of the Italian political crisis, the fastest growth in us inflation over the past 6 years and the associated increase in the probability of four increases in the Federal funds rate in 2018 are putting serious pressure on gold. The precious metal came to the lower limit of the consolidation range of $1.292-1.308 per ounce and in case of its breakthrough risks are developing a corrective movement to an upward long-term trend. Much will depend on the dynamics of the yield of Treasury bonds and the US dollar.

Gold has traditionally been perceived as an tool of protection against inflation, but to say that the growth of CPI uniquely a "bullish" factor for gold is like saying that the slowing of consumer prices increases the purchasing power of the currency and helps strengthen its rate. In fact, all this must be seen through the prism of the actions of the central bank. While the US CPI in May accelerated to 2.8%, and the basic inflation - to 2.2% y/y, the Federal Reserve has nothing to do but to tighten monetary policy. As unemployment wanders near the lowest level for the last 18 years (3.8%), and GDP, according to the forecasts of the Federal Reserve Bank of Atlanta, is ready to accelerate to 4.6% q/q in the second quarter.

The dynamics of American inflation 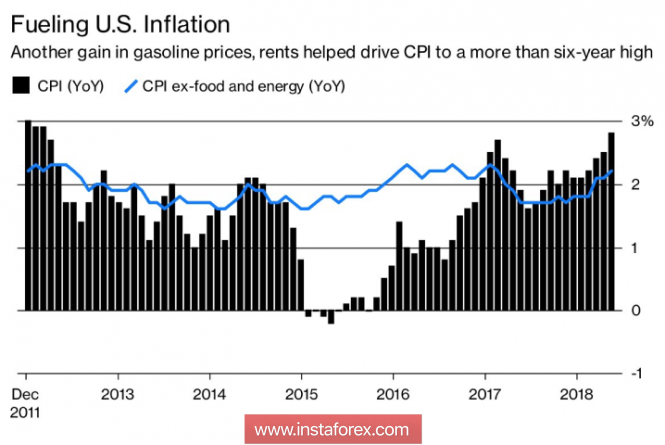 In such conditions, investors tend to discard bonds and transfer to other assets. As a result, the yield increases, which contributes to the strengthening of the US dollar. That increase in real interest rates in the debt market makes gold nervously react to the acceleration of inflation. Such trends are taking place around the world, which keeps the precious metal under serious pressure. 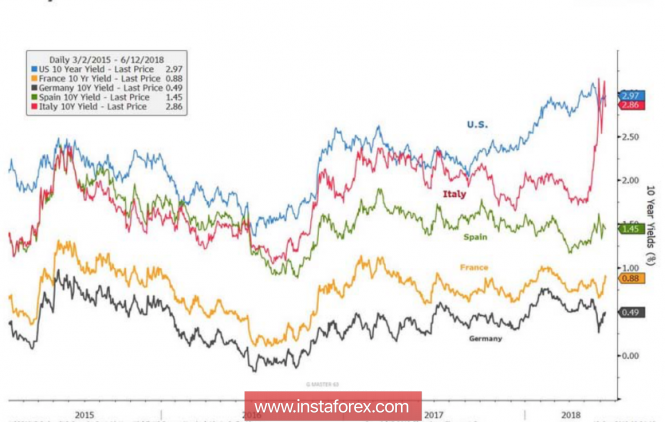 However, the surge in consumer prices is likely to be temporary. In May, the cost of energy increased by more than 11%, due to the growth of quotations Brent and WTI. At present, oil is included in the consolidation, and if the Fed is in a hurry with the rate hike, it can get into an unpleasant situation. Inflation will fall below the target, and the Fed will have to think about easing monetary and credit policy. To prevent this, the central bank needs to buy time. And it is absolutely correct about its ability to tolerate the symmetrical nature of inflation. Investors perceive this signal as "dovish" and do not rush to buy the dollar. If Jerome Powell during his press conference following the June meeting of the FOMC again talks about patience, then the US currency risks losing all the achievements obtained after improving the forecasts for the rate.

For gold, this would mean first returning to the consolidation range $1292-1308 per ounce after a short-term exit beyond its limits. In the future, it is possible to implement the "false-break,"pattern because technically, the "bulls" have many chances to seize the initiative and rush in the direction of the target at 161.8% for the pattern "Crab". 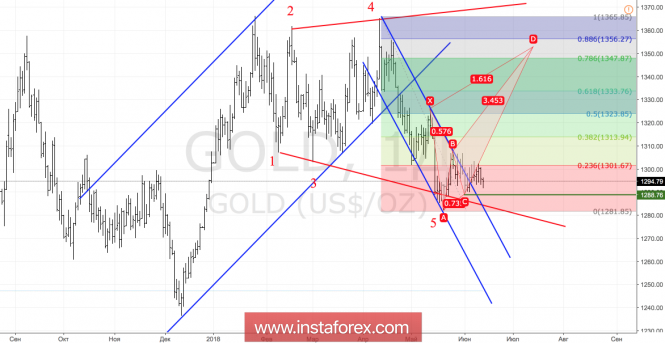