On Tuesday, the British pound fell by 52 points, to the nearest target of 1.2311, defined as the point of intersection of the embedded line of the price channel and the price level of the low on November 20, 2016, there are about 140 points. Important economic data will be released in the UK today, forecasts for which look optimistic, but the technical picture is in conflict with these expectations. 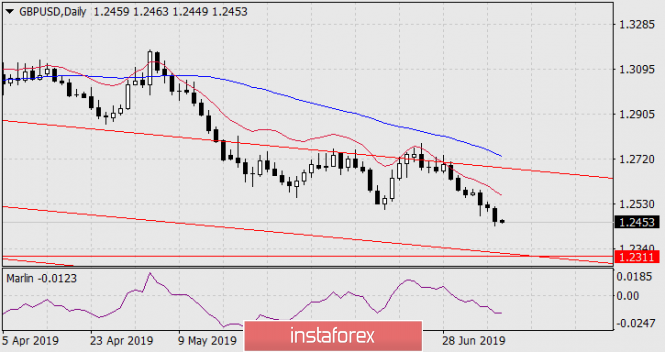 Industrial production is expected to grow by 1.6% in May against a decline of 2.7% in April, production in the construction sector is expected to increase by 0.4% against -0.4% earlier, GDP for May could expand by 0, 3% versus an economic contraction of -0.4% in April. The trade balance for May is seen to decline from -12.1 billion pounds to -12.5 billion pounds. The expected data is good in that it allows you to avoid a recession in the three-month horizon, even if they do not overlap the deterioration of previous periods. 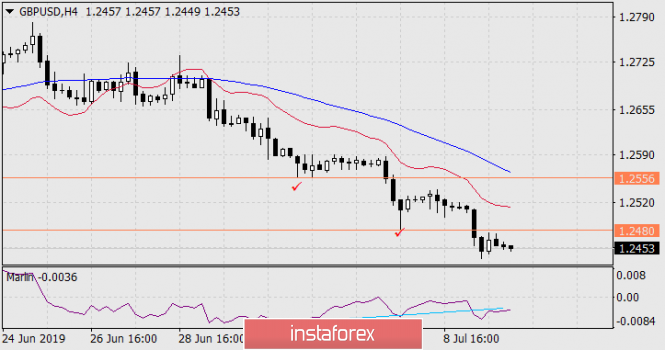 On the four-hour chart, the price consolidated below the lower limit of the 1.2480-1.2556 range, while the Marlin oscillator signal line went under the forming convergence line, that is, it was not expected to turn upwards from the technical side. Hence, taking into account the general pessimistic mood of the market relative to the British pound, rumors of a lower BOE rate, the market's response to expected data can be muted, even data can be interpreted as not strong enough to change investor sentiment or the data could turn out worse than predicted.

Therefore, we are waiting for the pound at a target level of 1.2311 in the coming days.