EUR/USD. July 17. Results of the day. Inflation in the European Union has accelerated slightly 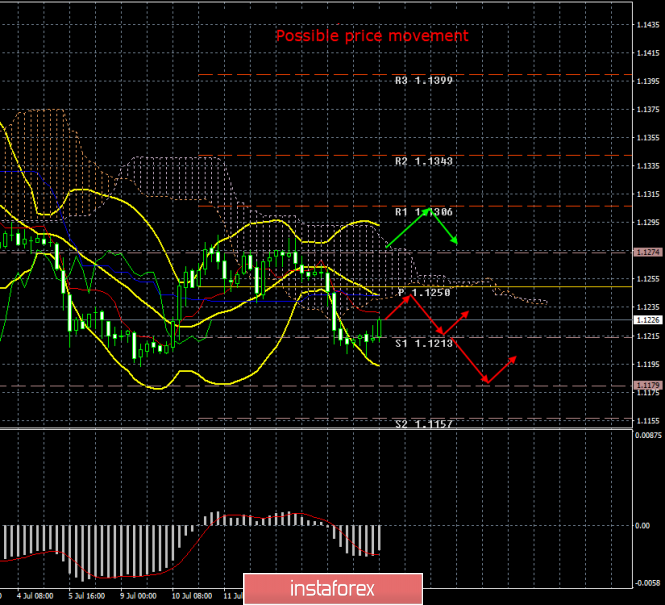 The most interesting macroeconomic report of today was, of course, the inflation report in the EU. As it turned out, the consumer price index in June accelerated to 1.3%, while experts predicted the preservation of the previous "figures", that is, 1.2% y/y. Core inflation showed an increase of 1.1% in accordance with predicted values. This information was supposed to support the euro currency, as it is at least some positive news from the European Union. However, traders seem to have judged otherwise. After all, the target of 2.0% set by the European Central Bank is very far away, and in the long term, 2% of inflation has not been seen for a long time. Thus, the growth of 0.1% is not particularly pleased with the foreign exchange market. There were no more important macroeconomic publications on July 17th. We can only recall the trade war between China and the United States. After the G20 summit, many traders were overwhelmed with optimism, as Donald Trump and Xi Jinping said that the countries were returning to negotiations. However, as we wrote back then, "to return to negotiations" does not mean "to agree". Yesterday, the US President wrote on his Twitter that the fall in the growth rate of China's economy to the levels of 1992 is directly related to the introduction of duties by America. And that Washington can further increase the pressure on China if it imposes duties on absolutely all imports from this country. In turn, the Ministry of Foreign Affairs of China made a statement, according to which 6.2% of GDP – is "good figures" in any case, given the slowdown in global economic growth. Thus, as we can see, there is no question of any truce, and the signing of the notorious trade deal is still very far away. And not the fact that the parties will be able to agree.

The EUR/USD pair started the weakest upward correction with the target of the critical line. Thus, now the sales of the euro are still relevant to the targets at the levels of 1.1179 and 1.1157, but after the completion of the correction round.

It is recommended to buy the euro/dollar pair not before fixing the price back above the critical line with the first targets of 1.1274 and 1.1306, but with the minimum lots, as the bulls remain extremely weak.