The euro grew during the first half of Thursday due to optimistic rates of European business activity for the current month: Manufacturing PMI of the euro area grew from 33.4 to 39.5, Services PMI showed even greater dynamics - an increase from 12.0 to 28.7. The euro has decisively reversed since the US session opened. US PMIs came out better than expected, but not as much as we expected: Manufacturing PMI grew from 36.1 to 39.8 against 39.3, Services PMI grew from 26.7 to 36.9 with 32.6 expected. Nevertheless, the trading volumes were comparable to those observed on May 18, which indicates a massive closure of purchases and even the opening of sales. A more interesting story awaits us next week, when sales of new housing, orders for durable goods, incomes and expenses of consumers will be published in the US. 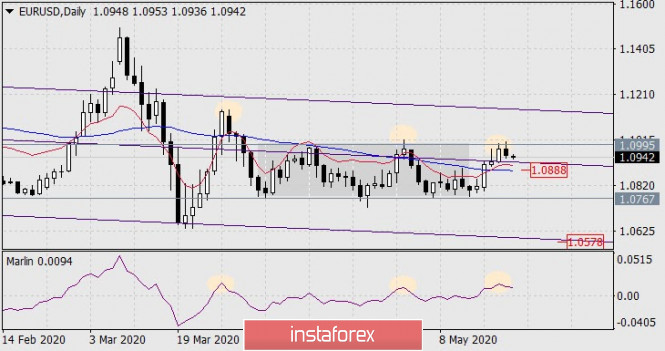 The price was re-marked at the upper border of the price range and with the turn of the oscillator, Marlin headed down on the daily chart. The closest support for the price is the price channel line at 1.0918, below it is the MACD indicator line at 1.0888, overcoming it will confirm the euro's intention to go much deeper down to 1.0767 and 1.0578. 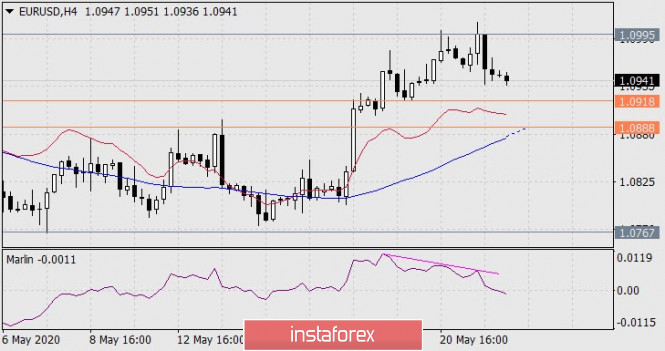 The signal line of the Marlin oscillator penetrated into the downward trend zone after forming a double divergence on the four-hour chart. The closest target is the 1.0888 level, at which the MACD lines coincide on both scopes. Consolidation under the level opens the way to the lower border of the range 1.0767.