GBP/USD: plan for the European session on May 22 (analysis of yesterday's trade). Pound set in the side channel. They do not want to buy, but they are afraid to sell. Bears aim for 1.2185

Yesterday, purchases from the 1.2222 level, to which I paid attention in my review for the afternoon, did not manage to bring the proper result, and after a serious erosion of this level amid the release of data on the US economy, I had to give up long positions, which was the right thing to do, since it did not result in the pound's growth, thereby squeezing the pair in a narrow side channel. At the moment, the bulls need a breakthrough and consolidation above the resistance of 1.2245, which can only happen if there is good data on retail sales and lending in the UK. In this scenario, we can expect the upward trend to continue with a test of highs 1.2293 and 1.2336, where I recommend taking profits. An equally important task will be to protect 1.2185 support, which sellers are now striving for. Forming a false breakout at this level will be a signal to open long positions, while I recommend buying GBP/USD only for a rebound from a low of 1.2122, where an attempt will be made to build the lower border of a new rising channel.

Sellers need to keep the pair below the resistance of 1.2245 as low as possible, which is also the upper limit of yesterday's side channel. In case GBP/USD grows, forming a false breakout there in the morning after the release of reports on retail sales in the UK will be a good signal to sell with the goal of breaking through and pinning 1.2185 under the lower border of the current side channel, which will only increase pressure on the pound and will lead to an update of a larger low of 1.2122, where I recommend taking profits. You could aim for the month's low in the area of 1.2074. With the GBP/USD growth scenario above the resistance of 1.2245, it is best not to rush into selling, but to wait for the test of this week's high around 1.2293. You can open short positions from there immediately on the rebound while expecting a correction of 30-35 points within the day. 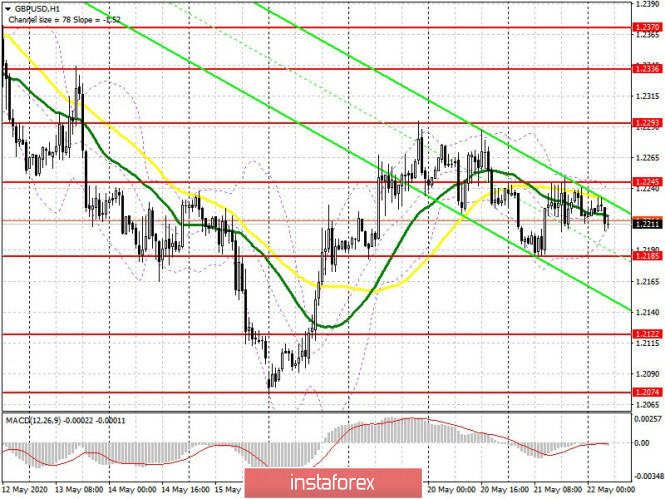 Trade is conducted in the region of 30 and 50 moving average, which indicates the lateral nature of the market.