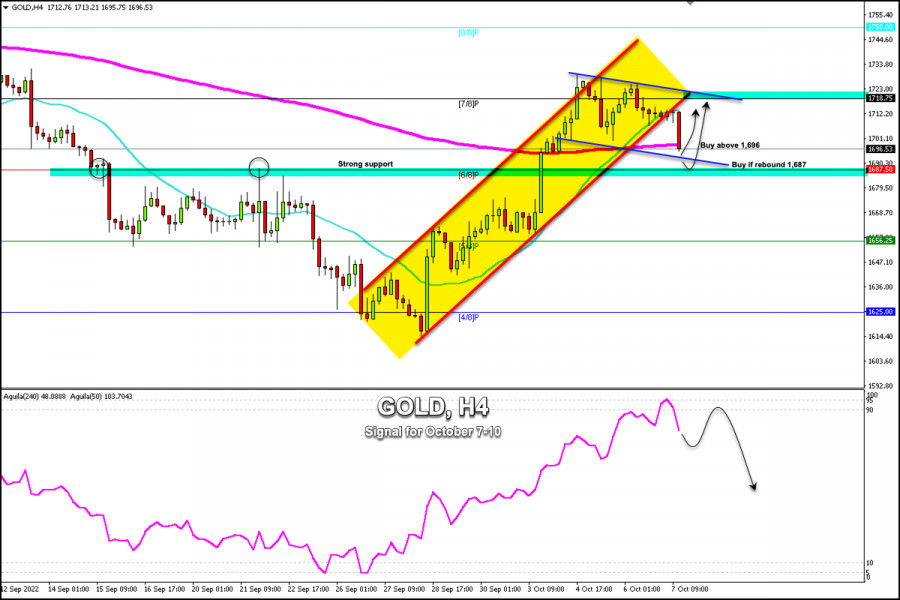 Early in the American session, gold is trading around the 200 EMA located at 1,697. We can see a strong move breaking the uptrend channel due to the upbeat non-farm payrolls which turned out to be positive for the US dollar.

Investors are convinced that the US central bank will tighten its monetary policy at a faster pace to curb inflation. This could be a factor that will keep gold under downward pressure in the coming days.

Given that gold is approaching support levels around the 200 EMA and around 6/8 Murray in this area, it could be considered a buying opportunity with targets at 1,700 and 1,715 (21 SMA).

On the 4-hour chart, we can see that gold broke the uptrend channel formed on September 26. This is a negative sign. However, gold could still resume its bullish cycle if it consolidates and trades above 1,687.

On the contrary, a daily close and a sharp break of the critical support at 1,687 could open the door for a bearish cycle and gold could fall towards 1,656 and could even reach 4/8 Murray at 1,625.

The eagle indicator reached the extremely overbought zone. Hence, we have seen a strong correction in gold. However, the asset could resume its bullish cycle again. For this, we should see gold trading above 1,680 and above the psychological level of 1,700.