EUR/USD hitting 1.0577 prompted a buy signal in the market, however, there was no sharp increase even though the MACD line started to move above zero. Shortly after, the pair went to 1.0544, where a sell signal was formed. This time, the MACD line was moving below zero, so the pair fell by more than 60 pips, ofsetting the losses earlier. 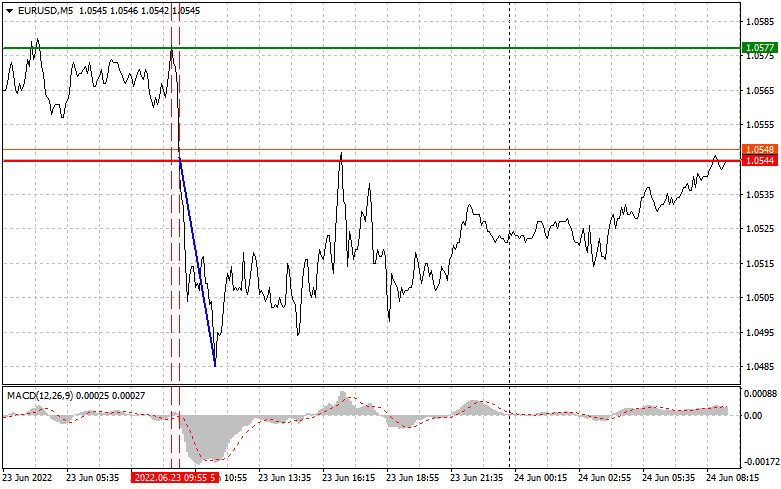 PMI data from the Eurozone disappointed traders as there was little upside activity. Likewise, reports from the US did not lead to a surge in volatility, while the speech of Fed chairman Jerome Powell repeated exactly everything he said the day before.

A lot of reports are scheduled to be released today, and these are business expectations, assessment of the current situation, and business climate index from Germany. The last indicator is the most important as it may lead to an increase in euro.

In the afternoon, there will be data on consumer expectations and consumer sentiment from the US, followed by a report on new home sales. The latter could hurt dollar as its figure is expected to go down. Statements from ECB and Fed representatives are unlikely to spark market volatility.

Buy euro when the quote reaches 1.0569 (green line on the chart) and take profit at the price of 1.0637 (thicker green line on the chart). There is a chance for a rally today, but only after strong statistics from Germany. Also, make sure that when buying, the MACD line is above zero or is starting to rise from it. Euro can also be bought at 1.0528, but the MACD line should be in the oversold area as only by that will the market reverse to 1.0569 and 1.0637.

Sell euro when the quote reaches 1.0528 (red line on the chart) and take profit at the price of 1.0475. Pressure will return if the UK reports weaker-than-expected economic data. However, when selling, make sure that the MACD line is below zero or is starting to move down from it. Euro can also be sold at 1.0569, but the MACD line should be in the overbought area, as only by that will the market reverse to 1.0528 and 1.0475. 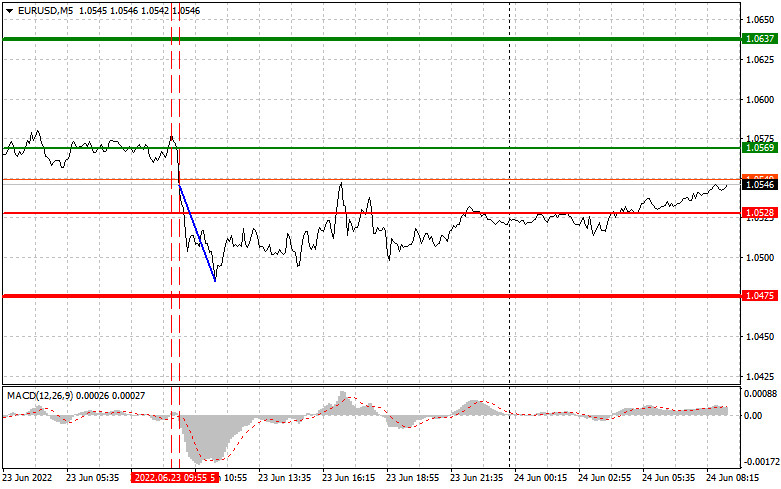