Several good market entry signals were formed on Friday. Let's take a look at the 5-minute chart and see what happened. I paid attention to the 1.2241 level in my morning forecast and advised making decisions from it. A decline and a false breakout at this level after a disappointing report on the decline in retail sales in the UK - all this led to an excellent entry point into long positions. As a result, the pair rose by more than 60 points, but we did not reach the test of the target level of 1.2317. An update at 1.2317 and a false breakout in the afternoon resulted in an excellent entry point for selling and to the pound's movement down by more than 50 points. 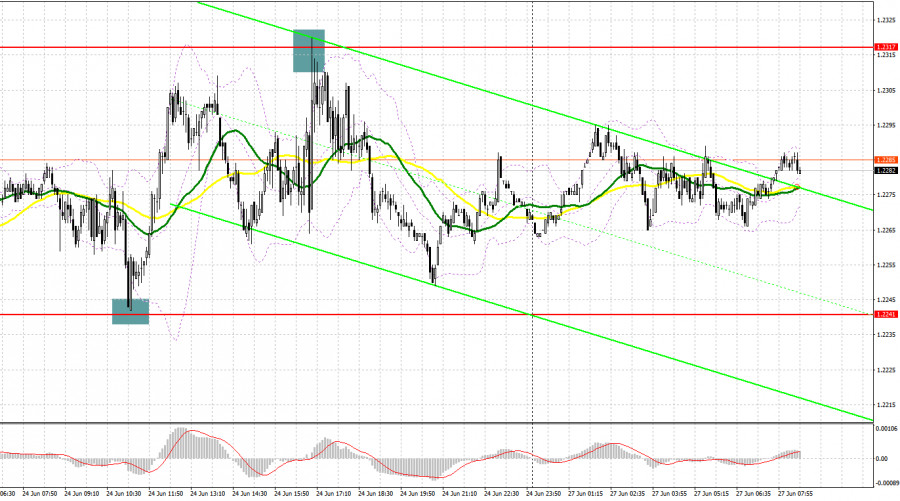 The report that the UK Office for National Statistics released on Friday did not hurt the pound bulls as much, but it had a rather good effect on their moods at the end of the week. Retail sales fell 0.5% from April. Economists had expected a decline of 0.7%. Sales excluding automotive fuel dropped 0.7%. Today there are no statistics for the UK, so I expect the pair to remain in the horizontal channel with the prospect of another test of 1.2317.

In case GBP/USD falls, the bulls will have to try very hard to offer something around 1.2241 – the middle of the horizontal channel. Therefore, forming a false breakout there, by analogy with what I analyzed above, will give a signal to open new long positions in anticipation of growth to the nearest level of 1.2317. This level is critically important for the bulls, because if they regain control of it, then it will be possible to count on the resumption of the bull market formed on June 14th. A breakthrough and downward test of 1.2317 will provide a signal to buy in anticipation of an update of 1.2400. A similar breakthrough of this level will lead to another entry point into long positions with the prospect of exiting at 1.2452, where I recommend taking profits. A more distant target will be the area of 1.2484. If the GBP/USD falls and there are no bulls at 1.2241, the pressure on the pair will increase. In this case, I advise you to open new long positions only on a false breakout from the lower border of the horizontal channel at 1.2171. You can buy GBP/USD immediately on a rebound from 1.2102, or even lower - around 1.2030 with the goal of correcting 30-35 points within the day.

On Friday, the bears coped with the task and managed to protect 1.2317. Forming a false breakout at 1.2317 will provide an entry point to short positions with the prospect of a return to 1.2241 – an intermediate level, a breakthrough of which will lead to a sell-off and return GBP/USD to the area of the lower border of the horizontal channel. Consolidating below 1.2241 and a reverse test from below creates an entry point into short positions with the prospect of a decline to 1.2171, where I recommend partially taking profits. A more distant target will be the area of 1.2102, the test of which will testify to the bulls' defeat.

In case GBP/USD grows and bears are not active at 1.2317, it remains only to rely on strong statistics from the US and the nearest resistance at 1.2400. A false breakout at this level will provide a good entry point to short positions, counting on at least some downward correction. In case traders are not active at 1.2400, another upsurge may occur amid the removal of stop orders of speculative bears. In this case, I advise you to postpone short positions to 1.2452. But even there, I advise you to sell the pound only in case of a false breakout, as going beyond this range will increase the demand for GBP/USD. You can look at short positions immediately for a rebound from 1.2484, or even higher - from 1.2516, based on the pair's rebound down by 30-35 points within the day. 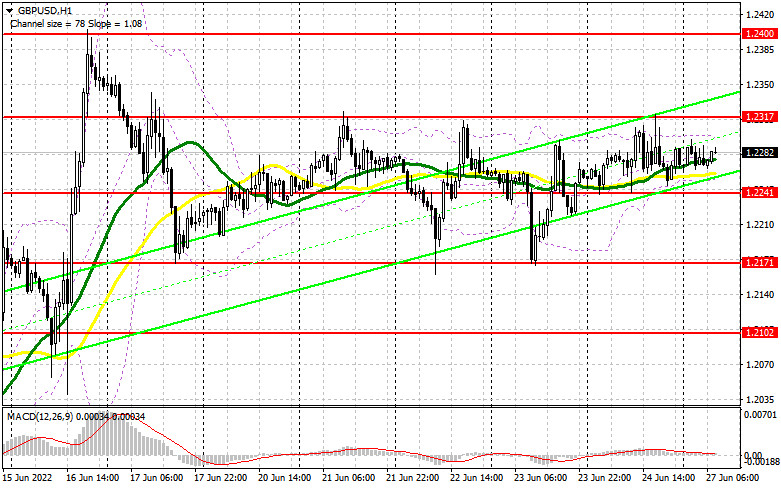 The Commitment of Traders (COT) report for June 14 logged a reduction in both long and short positions, which led to a slight decrease in the negative delta. After the Bank of England meeting, which announced the adherence to the previous plan to raise interest rates and fight high inflation, the pound strengthened its position, which will affect future COT reports. Surely the big players are taking advantage of the moment and buying back the heavily depreciated pound, despite all the negative that is happening to the UK economy right now. However, one should not count on the recovery of the pair in the near future, as the policy of the Federal Reserve will seriously help the US dollar in the fight against risky assets. The COT report indicated that long non-commercial positions decreased by 5,275 to 29,343, while short non-commercial positions decreased by 10,489 to 94,939. level -65,596. The weekly closing price decreased and amounted to 1.1991 against 1.2587.

Trading is conducted in the area of 30 and 50-day moving averages, which indicates market uncertainty.

In case of growth, the area of 1.2310 will act as resistance. In case the pair goes down, the lower border of the indicator around 1.2215 will act as support.