The Bank of Spain recently revealed its plan to launch its own experimental program with wholesale CBDC. The document released on December 5 announces this digital token program and explains that the institution is seeking cooperation from companies in the industry that will be able to formulate their proposals on this matter.

The institution explained that this program is unrelated to the European Union's ongoing research efforts on the digital Euro. The purpose of this new program is to identify the possibility of using such a currency and test the benefits it can bring in the settlement process.

Proposals will be accepted until January 31, after which the bank will begin evaluating each proposal for possible selection. Selected proposals will have to be implemented within a period of no more than nine months, starting on April 3, and are expected to end on December 29, 2023. However, the bank will be able to issue an extension depending on several factors, as documented in the selection process.

While most of the experiments and trials currently being conducted in the field of CBDC relate to a universal currency, the Bank of Spain is also interested in a wholesale currency aimed at helping to settle financial transactions between banking institutions.

Bitcoin has bounced from the local trend line support located around the level of $16,700, nevertheless, the volatility is very limited and the intraday market movements are narrow. The nearest technical resistance is seen at $17,428 and the next local technical support is seen at $16,020. There is no indication of the down trend on Bitcoin to terminate or reverse yet, so the next target for bears is seen at the level of $13,563 (2019 high).

Recently BTC/USD spiked up over 12% already as bulls were seen moving towards the next technical resistance located at $17,600. The 38% Fibonacci retracement level of the last wave down is seen at $17,664, so this level might be tested as well (in a form of a spike up etc.). 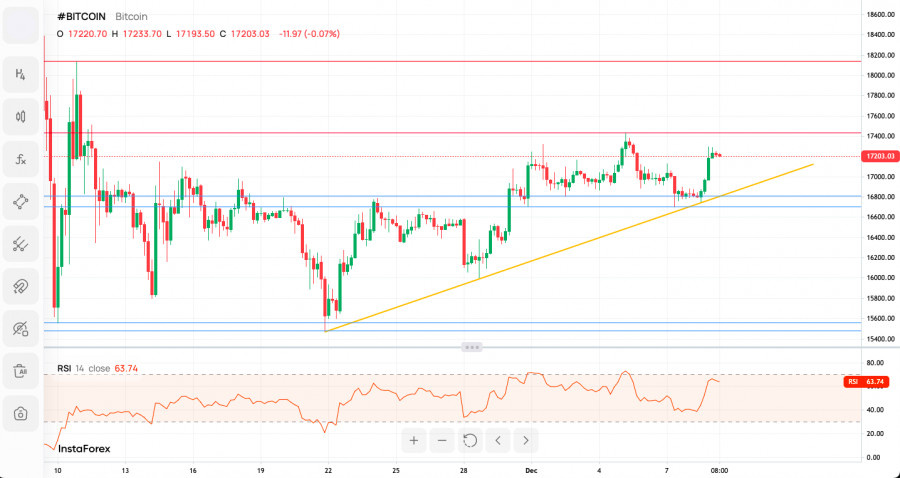