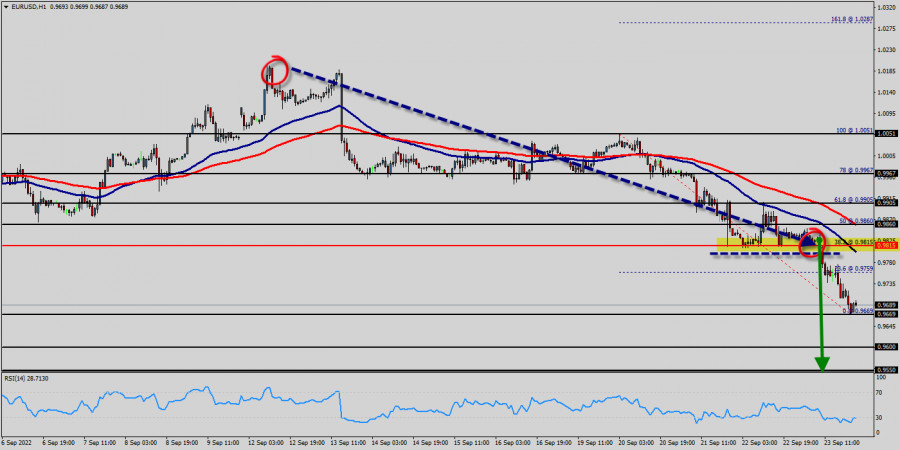 It expected the level at 0.9815 might act as resistance in the EUR/USD currency pair last week, as it had acted previously as both support and resistance. Note how these role reversal levels can work well. The H1 price chart below shows how the price rejected this level at the start of last week with a bearish inside candlestick, marked by the down arrow signaling the timing of the bearish rejection.

The EUR/USD pair was trading lower and closed the day in the red zone near the price of 0.9815. Today it was trading in a narrow range of 0.9689, staying close to Friday's closing price. On the hourly chart, the EUR/USD pair is again trading below the MA (100) H1 moving average line (0.9815).

Also, the level of 0.9815 represents a weekly pivot point for that it is acting as major resistance/support this week.

The one-hour chart favors a downward extension, as the pair broke below its 50 and 100 EMAs, both gaining downward traction. Technical indicators head sharply lower within negative levels, reflecting sellers' strength from the levels of 0.9815, 0.9860 and 0.9905.

The situation is similar on the one-hour chart. On the downside, break of 0.9669 minor support will argue that larger down trend is ready to resume. Intraday bias will be back to the downside for retesting 0.9600 low first. For now, outlook will stay bearish as long as 0.9815 support turned resistance holds, even in case of another rise.

Intraday bias in the EUR/USD pair remains downwards first. on the downside, break of 0.9600 will suggest that rebound from 0.9550 has completed.

Moreover, the RSI starts signaling a downward trend, as the trend is still showing strength below the moving average (100) and (50). An alternative scenario is a final consolidation below MA 100 H1, followed by growth to 0.9815.

The market is indicating a bearish opportunity below the above-mentioned support levels, for that the bullish outlook remains the same as long as the 100 EMA is headed to the downside.

This is typically a great time of day to be entering trades in major Forex currency pairs especially anything involving an European currency such as the Euro. This trade has been nicely profitable, achieving a maximum positive reward to risk ratio of more than 6 to 1 based upon the size of the entry candlestick structure.

An acceleration in the bearish trend on the EUR/USD pair, which is a positive signal for sellers. As long as the price remains below the price of 0.9815 a sale could be considered. The first bearish objective is located at 0.9600.

On the other hand, the stop loss should always be taken into account, for that it will be reasonable to set your stop loss at the level of 0.9860. In the very short term the general bullish sentiment is confirmed by technical indicators. Therefore, a small upwards rebound in the very short term could occur in case of excessive bearish movements. But the market is still in an downtrend. We still prefer the bearish scenario.

The trend of EUR/USD pair movement was controversial as it took place in the downtrend channel. Due to the previous events, the price is still set between the levels

The GBP/USD pair moved higher and closed the day in positive area near the price of 1.1874. It also rose a little, having risen to the level of 1.1900

The GBP/USD pair is trading sharply higher against the U.S. Dollar at the mid-session on the heels of the last month jobs report that missed expectations. The single currency soared

First day of week : The EUR/USD pair's rise from the price of 0.9912 resumes today and accelerates to as high as 1.0030 so far. Immediate concentrate

Australia is in a fever: interest rates have gone haywire

The interest rate derivatives market of the homeland of kangaroos is showing peaks of volatility. Could this be a problem for the entire Pacific region with a total volume

The GBP/USD pair's rise from the price of 1.1352 resumes today and accelerates to as high as 1.1644 so far. Immediate concentrate is now on 1.1421 resistance turned support, which