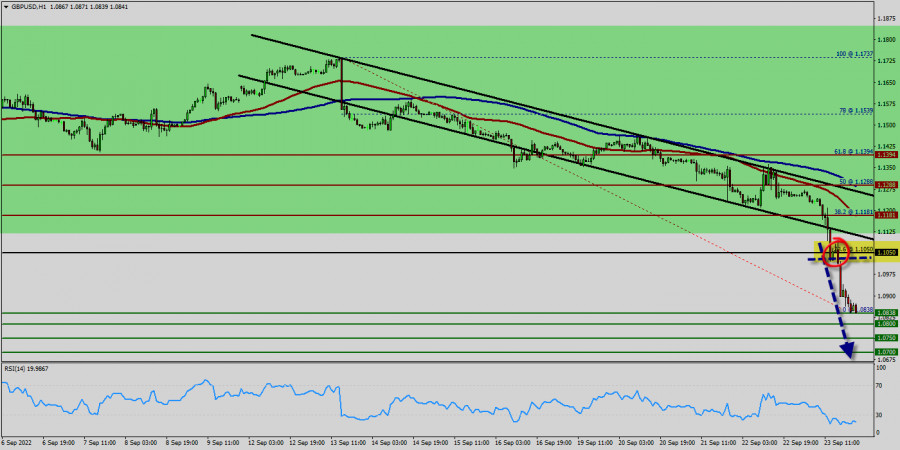 The GBP/USD pair stayed below the psychological level of 1.1050 over the weekend, indicating a lack of urgency to accumulate at the current levels. The bears are attempting to extend GBP/USD pair's decline below 1.1050 to bottomed at 1.0838 right now.

The GBP/USD pair remains downside for consolidation below 1.1050 temporary low. Downside of recovery should be limited by 1.1050 support turned resistance to bring another fall.

The Pound pair depreciated further to 1.0838, the lowest level in 20 years, falling towards parity against the dollar on concerns the energy crisis would lead U.K region to a deep recession, placing the ECB between a rock and a hard place as it tries to curb inflation and rest a slowing economy. The GBP/USD pair decreased within adown channel.

Closing below the pivot point (1.1050) could assure that the GBP/USD pair will move lower towards cooling new lows. Then, the bears must break through the price of 1.0838 in order to resume the downtrend.

Alos it should notice that the Pound is edging lower against the U.S. Dollar late in the session this morning in a volatile session that saw the single currency posting an early loss before continuing after data in the U.S. showed the world's largest economy created more jobs than expected this month.

The trend is still calling for a strong bearish market from the spot of 1.1050. Sellers are asking for a high price. In this regard, sell deals are recommended lower than the 1.1050 level with the first target at 1.0838.

It is possible that the pair will carry on downwards continuing the development of the bearish trend to the level 1.0800.

Furthermore, the moving average (100) starts signaling a downward trend; therefore, the market is indicating a bearish opportunity below 1.0800. So, it will be good to re-sell at 1.0800 with the second target of 1.0750. It will also call for a downtrend in order to continue towards 1.0700.

However, stop loss has always been in consideration thus it will be useful to set it above the last double top at the level of 10150 (notice that the major resistance today has set at 10150). Please check out the market volatility before investing, because the sight price may have already been reached and scenarios might have become invalidated.

Since the trend is below the 23.6% Fibonacci level (1.050), the market is still in a downtrend. Overall, we still prefer the bearish scenario. Consequently, there is a possibility that the GBP/USD pair will move downside. The structure of a fall does not look corrective.